In place of on-field baseball action, which is postponed by the COVID-19 pandemic, The Globe and Mail brings you a computer-simulated tournament involving four of the greatest Canadian teams in history, using the sophisticated software of the sports-game company Strat-O-Matic. The first-round best-of-seven-game series will pit the 1985 Blue Jays against their World Series-winning counterparts from 1993, while on the other side of the bracket the 1981 Expos take on the 1994 Montreal side. Today’s match-up is Game No. 1 of the all-Jays series.

Rise met occasion in the top of the ninth inning at Toronto’s Exhibition Stadium, where a Roberto Alomar double drove home the tiebreaking run in a stunning come-from-behind victory by the 1993 Blue Jays over their 1985 Jay rivals. The win gave the ’93ers a 1-0 series lead.

With two out and Devon White on second base, Alomar squared up a fastball from reliever Bill Caudill that defied the best efforts of outfielders Jesse Barfield and Lloyd Moseby in the gap between right and centre fields. White crossed the plate uncontested. An announced crowd of 39,600 collectively winced.

“With Caudill, you need to just look for one pitch inside,” Alomar said after the game. “I fouled off two pitches on the outside corner, but in my mind, I was looking for a fastball inside. I found a ball in the zone and hit it well.”

The ninth inning began with the 1985 Jays ahead 6-5. With lefty Gary Lavelle on the mound, first batter Ed Sprague flew out meekly to left field. Switch-hitter Turner Ward, pinch-hitting for Pat Borders, grounded sharply but unsuccessfully to short. The two-out rally began with a single and a stolen base by Rickey Henderson, who advanced to third on a throwing error by Ernie Whitt.

“Nothing’s impossible for Rickey,” the veteran Henderson said later in the clubhouse, curiously referring to himself in the third person. It was for just that kind of moxie that the ’93 Jays had acquired the 34-year-old speedster and on-base machine from the Oakland Athletics in a trade-deadline deal that cost them Jose Herrera and highly touted pitching prospect Steve Karsay.

After Henderson’s table-setting, a single up the middle by White set up Alomar’s go-ahead dramatics.

Caudill felt apologetic in the locker room. “I sure let that one get away," said the pitcher who began the season as the team’s high-priced closer before losing his job to rawboned fireballer Tom Henke. "It’s a miserable feeling to let the guys down, and our fans.”

In the bottom of the ninth, the ’85 Jays quietly went down in order against Duane Ward. The ace reliever, who had blown a lead an inning earlier when he gave up a two-run home run to Willie Upshaw, picked up the win.

The 1985 manager, Bobby Cox, was asked why he didn’t use Henke, warmed up and ready, in the ninth inning. “Bill Caudill pitched well for us this season,” Cox said to reporters afterward. “We’re not paying him $4.5-million over three years plus vesting options and bonuses to sit on his you-know-what.”

Neither of the game’s starting pitchers had their best days, in particular 1985 starter Dave Stieb. The 14-game winner was roughed up by 11 hits and five earned runs in seven innings, his vaunted slider more jive than slide.

The three runs scored against 1995 starter Juan Guzman all were the result of solo home runs, from Damaso Garcia, George Bell and Rance Mulliniks. Bell’s tater in the bottom of the seventh came after he had robbed Carter of a home run in the top of the same inning.

His heroism was fleeting, as it turned out.

Tomorrow, The Globe will run a game report and boxscore of Game No. 1 of the Montreal side of our computer-simulated tournament. Scheduled starting pitchers are Steve Rogers for the 1981 Expos and Ken Hill for the ‘94 Montrealers. The winner of the best-of-seven series will face the victors of the matchup between the Toronto Blue Jays teams from 1985 and 1993. 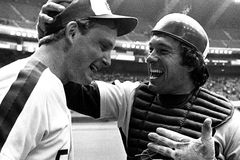