It was a heavy dose of Jozy Altidore and Sebastian Giovinco as Toronto FC earned the right to hoist the Voyageurs Cup as Canadian Champions for the third straight time Wednesday night.

Altidore led the way with three goals, as TFC beat the Vancouver Whitecaps 5-2 at BMO Field in the second leg of the Canadian Championship Final, winning 7-4 on aggregate. Giovinco recorded one along with a pair of assists, and Tosaint Ricketts potted the last.

It was the seventh Voyageurs Cup title for the Reds, which gives TFC the right to represent Canada in next year’s CONCACAF Champions League again. Confetti fell, and TFC raised the silver trophy and beat the drum to sing with its fan,s but the celebration was somewhat low key for the reigning MLS Cup champs.

TFC looked more confident in the match than it had at most times this year. The squad has been a shadow of itself while playing to a 6-12-5 record in MLS play this season, sitting in ninth place in the Eastern Conference. Toronto’s side knows it has a tough road ahead in its last 11 league games, as it sits on the outside looking in at a playoff spot.

“It was an important night to win a championship and get confidence under our belt in these last 11 games,” said TFC head coach Greg Vanney. “We will use this as a springboard as best we can.”

At the conclusion of a tournament that celebrates Canadian soccer, the match also provided a rare chance for Toronto sports fans to see Canadian teenage sensation Alphonso Davies in person, dubbed the most promising soccer prospect this nation has ever produced. The Whitecaps recently reached an MLS-record transfer agreement to send their 17-year-old midfielder to German powerhouse Bayern Munich at season’s end.

The Canadian teen had one exciting scoring opportunity for Vancouver on Wednesday, and played just over a half.

Davies is a glimmer of optimism for Canada’s long-suffering men’s national team as it aims to strengthen itself before being one of three host nations for the 2026 FIFA World Cup.

The young star participated in only a portion of the Whitecaps’ training session at BMO Field On Tuesday before coaches sidelined him as he continued to feel effects of a groin injury suffered in the first leg of the final. Afterward he spoke to media for one minute – saying very little -- then hurried off to see medical staff.

Vancouver’s head coach Carl Robinson described Davies as a “great kid”, one who loves video games and showing off his dance moves, a player who soaks up information like a sponge and is beloved by his teammates. They’ve carefully managed the kid they call “Fonzie” during his three years in Vancouver, Robinson stressed, sheltering him from too much media, and infusing him gently into the lineup.

The youngster’s back story reads like the script for a Hollywood film. He was born in a refugee camp in Ghana to Liberian parents fleeing the Liberian civil war. When he was five, the family moved to Canada. He was raised in Edmonton, where he thrived in youth soccer.

By age 15, Davies signed his first pro contract with the Whitecaps’ second team. It was soon followed by his first MLS contact with Whitecaps FC in July 2016. He received his Canadian citizenship last June, opening the door to play for its men’s national team. Being sold to a storied club like Bayern Munich realizes a boyhood dream for Davies.

“I don’t feel any pressure. I just want to go out there and have fun,” said the unassuming 5-foot-11, 160-pound teen with braces nicknamed Fonzie. “Kids look to me and I’m very grateful for that. I look up to higher and better players as well.”

In the first leg – played the previous week in Vancouver – the Whitecaps had been seconds away from a 2-1 victory, when Doneil Henry’s misplaced header in stoppage time landed in his own goal, tying the match 2-2, and giving TFC two road goals, enough to lead the series 4-2 on aggregate heading to Toronto.

After a quiet start to the game, goal opportunities came in a flurry in Wednesday’s second leg as the first half neared a close. TFC sailed a few chances just over the Vancouver net– a header by Chris Mavinga and a blast off the boot of Giovinco.

Hard-charging Davies had Vancouver’s best chance of the first half, launching a long bomb that rocketed just wide of Clint Irwin’s goal post.

Finally Altidore put one under the outstretched legs of Whitecaps keeper Stefan Marinovic in the 39th minute after a bit of precision passing with Marco Delgado and Justin Morrow. Just five minutes later, Giovinco dove belly first and headed in another ball, for a 2-0 Toronto lead.

Just inside the second half, Altidore netted his second, off a cross net pass from Giovinco in the 49th minute. His third quickly followed – again from Giovinco – off a corner.

With the match slipping way, the Whitecaps swiftly subbed out Davies in the 51st minute.

“Toronto did a good job of neutralizing him a little bit,” said Robinson.

Speedy Whitecaps forward Kei Kamara got loose to put one past Irwin for Vancouver. Brek Shea added another for Vancouver to make things slightly uneasy.

Another Edmonton native, Ricketts, booted TFC’s fifth goal in the 80th minute, off a pass from captain Michael Bradley.

TFC gets another shot at the prestigious club tournament, to test itself against the club sides from North America, Central America and the Caribbean. TFC lost a heartbreaker in last year’s Champions League final in Guadalajara Mexico, but learned a great deal.

“It’s our ticket back into Champions League and that’s still very much on everyone’s minds,” said Bradley. “On an important night, we after things in a good strong way. It keeps us playing important games, and gives us another crack at it.” 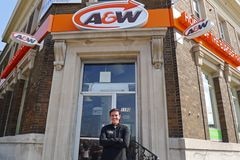 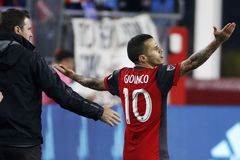 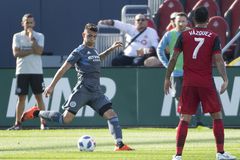