It’s the Eastern Conference heavyweight fight piquing the curiosity of so many: The Toronto Raptors in another playoff showdown against LeBron James and the Cleveland Cavaliers, the same team that ended the Raptors’ past two seasons.

The Raptors have loads of respect for the four-time NBA MVP and his team. They’ve digested all the heartbreak from those playoff exits, and learned from their mistakes. They’ve since changed their style of play and risen to the top of conference because of it.

So it’s officially time to ask the million-dollar question: Are these new-fangled Raptors better-built than past Toronto teams, and therefore able to knock off the Cavaliers in this second-round series?

“No question. I feel it. We all have that confidence in ourselves,” Raps all-star DeMar DeRozan said on Sunday. “The way we play now is from the mistakes we made in those series, going down in them. That’s what made us better, made us at this point where we’re at now, at the top of our conference, having the confidence we have and a style of play we love to play.”

Two days after closing out their first-round playoff series against the No. 8-seeded Washington Wizards 4-2 on Friday night, the top-seeded Raptors were back at practice Sunday. It was a rare late-day practice, scheduled for 5 p.m., so each team member could study the afternoon’s Game 7 between the Cavaliers and Indiana Pacers. That ended in a 105-101 Cavs win in Cleveland, secured on the strength of 45 points by James.

“Obviously, he’s been one of the best players in the league for a long time. Obviously, I respect the guy a lot, the type of player he is, the person he is,” Toronto reserve point guard Fred VanVleet said. “But for me, the most respect I can give him is to not give him any respect, in terms of going out there and just trying to challenge him and take him down. That’s our job and that’s what we need to do this week.”

The Raptors have home-court advantage in the series with the No. 4-seeded Cavs, starting on Tuesday night at the Air Canada Centre. Toronto is the better-rested team, unlike last year, when the Cavs had swept the Pacers 4-0 and enjoyed a sizable break before meeting the Raptors.

“We have to go in ... and play our philosophy, with our pace, our defence and not get caught up [like] last year, two years ago, three years ago, and play,” Toronto coach Dwane Casey said. “A lot of times you get caught up in that and you out-think yourself. We know what we have to do. We have a game plan in place.”

Perhaps the Cavs will be weary after an arduous seven-game series that left them little rest time before Tuesday?

“Neither team looked tired [in Sunday’s game],” said Casey, dismissing the possibility of getting a fatigued opponent.

The Raptors are 2-8 in playoff games against the Cavaliers the past two years, and 1-2 this year in the regular season.

The Cavs are an unpredictable team to prepare for, and not just because they used four different starting lineups in their first-round series. Their squad had a dramatic shift in personnel after the trade deadline, and their results have been inconsistent. The Pacers outscored them by 40 points in their first-round series, however, it was the Cavs who found a way to muster the necessary four victories.

But one can never underestimate James’s ability to will a team to victory.

“Gotta go through the best to get to that trophy, every step of the way we’re going to come across somebody. So why not the guy that’s been in the finals the last X amount of years, why we don’t want to be the team that knocks that team off,” DeRozan said. “That’s what it’s all about. As a competitor you want to be in the moments. You want to thrive in the moments, and we have the opportunity again to be able to do that.”

Game 2 is Thursday at the Air Canada Centre, then the series shifts to Cleveland for Game 3 on Saturday and 4 on Monday, May 7. 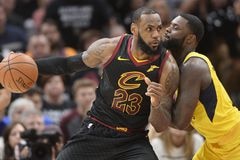 How a DeMar DeRozan tweet sparked a mental-health dialogue in sports
April 30, 2018 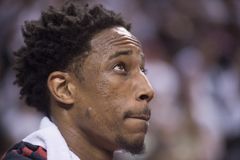 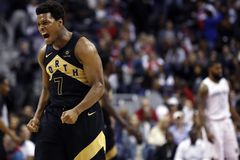