A little late in the day, the front-runners of New York decided to fall in love with Novak Djokovic.

For 15 years at the U.S. Open, the Flushing Meadows crowd treated Djokovic like Roger Federer’s valet. They recognized the face, but they had trouble remembering the name.

The Serb might expect a few cheers if he were playing an anonymous rookie from some remote country. But only if that rookie wasn’t handsome, or fun, or wearing a Day-Glo T-shirt. Then the crowd would shift allegiances.

Djokovic never did anything wrong aside from being himself – which hasn’t been a winning strategy for him, community-outreach-wise.

But Sunday was different. Djokovic was going to close out all four Grand Slams in a calendar year and overtake Federer and Rafael Nadal with 21 career majors. New York doesn’t like anyone who isn’t from New York. But they will sometimes pretend for a winner.

Medvedev powers his way through to U.S. Open final

Djokovic was there in body, but perhaps not in spirit, and definitely not in mind. If we know anything about the world No. 1, it’s that he has strong views on the mind-body-spirit connection. If you have three hours to spare, he’ll tell you all about it.

The Coles Notes on this match – his opponent, Daniil Medvedev played like Djokovic usually does in a final; and Djokovic played like Medvedev often does in the same spot. This wasn’t a defeat. It was a drilling. It ended 6-4, 6-4, 6-4 for the Russian. If that score sounds bad, don’t worry. It was worse.

How much does this matter in the grand scheme of tennis things? Not much.

The calendar Slam is a nice way to feather the career nest, but it doesn’t define anyone’s legacy. What really mattered was that 21st title.

Djokovic has won nine Australian Opens, including three on the trot. So this wasn’t a record lost. It was a record deferred, and only for four months.

What may prove stickier is Djokovic’s very-late-in-career turn from … ‘heel’ is the wrong word. The guy is too earnest to be hated. The worst you could say of him is that he is a try-hard.

All try-hards are bad, but the worst try-hard of all is one for whom things usually work out. In that sense, Djokovic is the try-hard par excellence.

Nobody hates him, but nobody likes him. He’s an irritant and a bore.

Early in the pandemic, people were lonely and confused and looking for celebrities to beat up on in order to fill the void in their lives.

Long before it was cool with the Reddit crowd (i.e. before anyone had come anywhere close to inventing a vaccine), Djokovic was vaccine hesitant. He said something else about purifying water with his mind. Then he held an exhibition tournament in which just about everyone, including Djokovic and his family, contracted COVID-19.

Now people had an actual reason to dislike him. And boy, did they. When Djokovic tried to speak up on behalf of his fellow pros at this year’s Australian Open, the whole world screamed him down.

But then he won the tournament.

He went down two sets to none in the French Open final and won that, too. Shortly thereafter, he cruised at Wimbledon.

You want to root for a legend? The golden age of men’s tennis spoiled people for choice. But all of a sudden, you only had one option – Djokovic.

So in the perverse way of the sporting hive mind, it was decided that people had liked Djokovic all along. They just hadn’t realized it until now.

Now granted the thing he’d wanted all along, Djokovic did what try-hards do – he took it too far.

It wasn’t good enough to win the men’s singles gold at the Tokyo Games. He wanted a mixed-doubles gold as well. If the Serbian Olympic Committee had allowed him, he’d probably have run the marathon and the 100 metres and let someone ride him in dressage.

The toll of doing two events for the first time in forever, combined with the Tokyo heat, sank him. Djokovic arrived a guaranteed lock for two golds and won no medals instead.

You didn’t know then it was going wrong, but you had a feeling. Djokovic arrived in New York determined to talk his way around all championship foreshadowing. But before the final, he said, “I’m going to treat this match as if it’s my last one.”

When you start talking in grandiose terms – last match ever! – it doesn’t sound very disciplined.

So maybe it’s not a shocker he fell apart.

But you also got the weird impression that things may actually have worked out for Djokovic on Sunday.

At 4-0 in the third set it was already over. How over? Analyst John McEnroe began thanking everyone on the ESPN crew.

One of his booth partners interrupted: “John, you’re running the credits.”

It’s not as though he was wrong.

At that point, the crowd began taking direct action. Whenever Djokovic did something right, they roared. Whenever Medvedev did anything, they booed.

That buoyed Djokovic’s play briefly, but nowhere close to enough. He came to the side on the last break smiling, energized by all the good vibes. But as he sat there towelling his head, he began weeping furiously. Even if the crowd didn’t, he knew it was over.

When it came to the trophy ceremony, Djokovic was still sniffling.

“Tonight, even though I have not won the match, my heart is filled with joy … because you guys have made me feel very special on the court,” Djokovic said.

It doesn’t read sincere, and he said it in his usual robotic way, but there is no doubt Djokovic was moved. You could see it in his wet eyes.

He’s won 20 majors. He’s made more than a US$150-million in prize money. He’s on the cusp of becoming the greatest in history.

But you get the feeling that what Djokovic really wants now is to be loved. For one afternoon, in the midst of his frailty and disappointment, he got his wish. 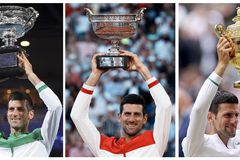 Daniil Medvedev hopes to have fans in his corner when U.S. Open begins
August 29, 2021 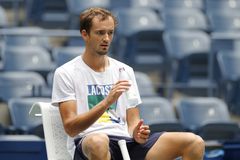 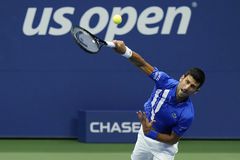