A day after the Toronto Blue Jays great day-off fiasco, Vladimir Guerrero Jr. was back in the starting lineup against the Boston Red Sox at Rogers Centre on Tuesday night.

The 20-year-old certainly looked refreshed after his break, taking his spot at third base after he was given possibly the most controversial furlough in Toronto sports history.

And to think it may have been avoided if general manager Ross Atkins had had the foresight to discuss the importance of Canadian statutory holidays with Charlie Montoyo, the Puerto Rican native whom Atkins hired to manage the Blue Jays.

Ultimately, it was Montoyo’s decision not to pencil Guerrero into Monday’s starting lineup, explaining that it was Guerrero’s turn to have a day off regardless of any extraneous circumstances.

“The one thing that I regret, in all the things that we’ve talked about with Charlie, I’d not talked to him about the importance of Victoria Day,” Atkins told reporters at the Blue Jays dugout before Tuesday’s game. “There are a lot of things in Canadian culture and about this great country that I have talked to him about.

“But I did not share with him the importance of Victoria Day.”

Rowdy Tellez cranked out two home runs (No. 7 and 8), which potted five Toronto runs. It was the rookie’s first multihome-run game of his career.

Tellez is a lefthanded bat and both his homers came off Boston lefty starter Eduardo Rodriguez, which added an exclamation point to his night.

Montoyo has allowed Tellez to face lefties all year, with good success.

“He’s part of our future so I was thinking why not give him a chance, see what he can do – and he’s done it,” Montoyo said. “That’s why he’s getting the chance because he’s swinging against lefties just like righthanders. He looks pretty comfortable.”

Marcus Stroman (2-6) finally got some run support and made the most of it, holding the Red Sox to just one run off five hits through six-plus innings to earn the win.

The GM was in damage-control mode trying to appease a large segment of the fan base who roasted the Blue Jays over their decision to bench baseball’s No. 1 prospect in their first game back from a six-game trip.

The team is in a rebuild and struggling to win and trying to sell tickets based more on the future than the present – and Guerrero is certainly an important part of that future.

The fact that he was not in the lineup on a national holiday where a large crowd was anticipated rubbed many the wrong way. And never mind that Guerrero is just starting to hit his stride after getting called up in late April, hitting .333 with four home runs in his previous six games to earn American League player-of-the-week honours.

In trying to explain the organization’s rationale as to what unfolded Atkins said that Montoyo has the authority to make up the lineup card as he sees fit.

And filling out a lineup card that might be more fan-friendly on occasion is not part of that criteria, he said.

“Really, it’s Charlie’s process,” Atkins said. “We have given him a lot of tools and resources, and there’s a lot of things to factor in to those decisions and we ask a lot for him to factor in.

“One of the things that we don’t ask him to think about is when fans may or may not be here when he decides on everyone’s playing time.”

Still, Atkins admitted that he never felt discussing national holidays with his manager would be a topic that had to be bridged.

“I think it is intuition a lot of times for managers to think about playing key players, potentially star players, on those days,” he said. “The reason being is that players want to play in those games. And I think there is a lot of attention and more fanfare and it is important to get players into those games.”

Atkins said that Montoyo has a lot of resources at his disposal when deciding who will play. It’s not just happenstance who gets out there.

“That’s why we leave it up to the staff that’s with [Guerrero] every day to make those decisions,” Atkins said. “And there’s so many variables to factor in – performance, the matchup information, fatigue, workload, travel, coming off of the road, day game whether after a night game or not.” 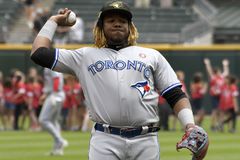 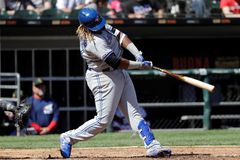 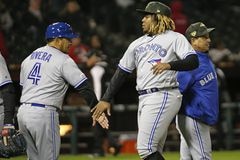