Before the pandemic arrived, one of the most popular game apps available for your phone was something called Plague Inc.

The goal of the game is to infect the entire world with a deadly virus. (They’ve since added a version in which you cure a virus instead. I’ve tried it. It’s less fun.)

The game is a simple, mindless diversion. If you’re winning, a map begins to turn red as the pathogen blooms around the world.

It was that image that leapt to mind on the weekend as the NHL gears up for the 2021 season. Because before it plays any hockey, the league must first play outbreak Whac-A-Mole.

It started in Dallas, where the Stars said six players and two staffers had tested positive. The team’s opening night was pushed back nearly a week. Several Columbus Blue Jackets players were AWOL without explanation from a workout.

On Saturday, the Pittsburgh Penguins cancelled practice out of what executives and players both called “an abundance of caution.”

Caution over what exactly? While the world has changed in the past year, the NHL hasn’t. Coronavirus obfuscation is the new “lower body injury.”

On Sunday, Fortress Canada was penetrated. The Vancouver Canucks also cancelled a practice as a COVID-19 measure. Once again, the same formulation – “an abundance of caution.”

A lot of things are going to happen when you hold a sports season during our particular moment in time, but an abundance of caution is not one of them.

An abundance of caution is locking yourself inside your house, then sealing the doors and windows with duct tape.

It is not large parties of young men flying across the continent, mingling with staff, workers in the service industry and each other, then moving on somewhere else to do it again.

There are good arguments to be made for attempting an NHL season, not the least of which is projecting some sense of normalcy to an irritable and frightened public.

But let’s call this what it is – a risky adventure undertaken in search of treasure. The treasure in this case being the millions of dollars everyone involved would have foregone had they cancelled the season.

Just contrast the NHL’s approach of last summer with its new, come-to-viral-Jesus take on top security.

Back in July, the NHL treated COVID-19 like Ebola. Bubbles, fences, accommodations, zero interaction between players and the infected horde (i.e. the rest of us).

For all the low-key complaining the players did afterward about boredom and isolation, they did enjoy one major perk – for a couple or three months, they lived in two of the most epidemiologically secure locations (Edmonton and Toronto) in the northern hemisphere.

But the bubble was a drag, no one famous died and money’s money. So the NHL has decided that, for the league’s purposes, COVID-19 is more like a really bad cold.

“It’s not lost on us what’s going on outside our four walls,” Calgary general manager Brad Treliving told The Canadian Press. “But I think as a league we’ve taken every possible consideration.”

Well, not every possible one.

The new watchword of the NHL is flexibility. It will pretzel itself up like a yogi before it will admit it is determined to have a season whether it’s a good idea. It doesn’t matter how many people get COVID-19.

Major League Baseball and the NFL have already proved to them that, short of a high-profile death, no one in the United States cares if athletes catch the virus.

To be honest, most Americans don’t seem to care if they catch it themselves. Why would they give a damn about the backup catcher for the Cleveland whoevers?

It works a little differently up here. Travelling between provinces was not a given (until it was). Fans in attendance was never on the table. The unspoken agreement was that, in Canada at least, the NHL did not have a bunch of COVID-19 mulligans.

Canadian teams did not get to pull a Baltimore Ravens or a Philadelphia Phillies – “The guys needed to blow off a little steam at a TGIFriday’s, they’re only human, and, yes, sure, everyone’s got the bug now, but it’s not like we could’ve seen this coming or anything.”

Last summer, the B.C. government earned some local public-health brownie points by making a great song and dance of rejecting a Vancouver-based NHL bubble hub. We’ll see if the same hardline exists if it turns out the Canucks have an abundance of COVID-19, as well as caution.

The one thing working in the NHL’s favour is that this is still the preseason. You aren’t cancelling games at the last moment, which makes the story less catnippy to the media. If the league can pull things together sharpish, it will get the benefit of the doubt.

The first five regular-season games are scheduled for Wednesday. Then it gets complicated.

What’s the NHL’s red line and how is it crossed? Presumably, a Florida outbreak is fine because it’s Florida. How about one in Winnipeg? Or Ottawa? What if the Prime Minister starts getting hassled daily about this? What happens if a Canadian team suddenly loses its ad-hoc licence to fly all over the place and still play in its home arena?

I have no doubt the league and its players are willing to take enormous risks in order to bring this campaign off. But how much faith do they have that Canadian lawmakers are willing to take those same risks and the political blowback that might come with them? Because there is no such thing as a premier or mayor with an eight-year deal.

If things go truly sideways, what’s the emergency backup plan? Beyond repeating “abundance of caution” as though it were it’s a magic spell, is there one? I have no doubt about that one either: No.

This one involves neither spreading a virus nor preventing its spread. In this new twist on Plague, a few hundred guys spend the next six months trying to outrun both the pathogen and deteriorating public opinion.

Opinion
So how did it become normal for sports journalists to be covering politics?
January 8, 2021 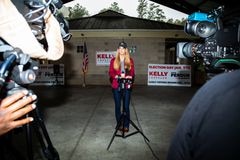 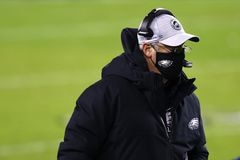 Opinion
Don’t call this NFL season a success. It was a series of close calls and near misses
Subscriber content
January 3, 2021 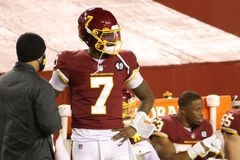