Wherever they store historic documents in the Hockey Hall of Fame, one hopes they are currently preparing a place for Bill Peters’s apology.

Peters started sending his mea culpa to reporters Wednesday night, while his team was playing. It is addressed to his employers but clearly intended for the theoretical arbiter at a future labour-dispute board. As of Thursday morning, he remains in professional limbo – still the head coach of the Calgary Flames but no longer allowed to coach them.

The apology is not eloquent or revealing. It confuses more than it clears up. It also manages the very modern trick of apologizing while simultaneously giving the apologizer a pass.

However, there are a few good laughs in it.

“The statement was made in a moment of frustration and does not reflect my personal values,” Peters writes.

A couple of things here: The things you say in frustration are generally the best illustration of your personal values. It’s easy to be nice when everything’s going fine – not so easy when things are frustrating.

But only some of us respond to frustration by popping our top and raging like an unhinged maniac. If you are the sort of person who does that, that means unhinged mania is your personal value.

One of his former AHL players, Akim Aliu, was more specific. In the midst of a locker-room meltdown over musical selections, Peters dropped what Aliu called the “N bomb.” He apparently did it a few times.

“I meant no disrespect in what I said, and it was not directed at anyone in particular,” Peters writes.

You know that thing where someone turns to you very seriously and says, “(Insert your name here), with respect … .” Everything that comes after those three words is meant to be disrespectful. They are telling you they think you are an idiot. So big an idiot that if they say “with respect,” they’re hoping you won’t notice how disrespectful they’re being. And presumably they aren’t shrieking at you as they do it.

Now when someone starts raving and swearing and cursing you for the colour of your skin, that is probably meant to convey some measure of disrespect.

The “not directed at anyone in particular” is the cherry on the top of that sentence. Yes, how could the only black guy in the room think a slur on black people is aimed at him? Clearly, he’s a little too delicate for this game of men.

You can go up and down the letter doing this. Aliu did and issued a statement in which he called it “misleading, insincere and concerning.” The total effect of it is to make one sad. Not for Peters or even Aliu (who is mentioned nowhere in this apology), but for the larger hockey culture that makes an “apology” like this possible.

Hockey prides itself on its rough-hewn decency. You go out on the ice and try to kill everyone wearing the wrong sweater, then change into your street clothes and buy your enemy a beer. Long before football and baseball figured out that the athletes people like most are these Jekyll and Hyde types, hockey was producing them on the regular.

Gordie Howe epitomized the type – a vicious thug on skates, a soft-spoken and courtly gentleman off the ice.

Hockey’s ideal definition of toughness boils down to situational lunacy. You have to know when to set your internal switch to “War” and when to turn it to “Peace.”

Somewhere along the line, certain hockey people started leaving theirs permanently on “War.”

You saw something of this hinted at by Rod Brind’Amour, who is a peripheral character in this mess.

Brind’Amour coached with Peters in North Carolina. He is now the head coach of the Hurricanes. As the Peters panic escalated, former Carolina player Michal Jordan chimed in to say Peters had once kicked him on the bench and punched another player in the head.

In any other professional scenario, this would not seem simply wrong. It would seem like solid grounds to have someone institutionalized. If someone kicked me at work, I’d throw them down a flight of stairs. But hockey players are apparently acclimated to this sort of thing.

On Wednesday morning, Brind’Amour knew he’d be asked about it in his postpractice scrum. He didn’t bother waiting for the question.

“Talking about the incident with Bill, it for sure happened, the two issues that are in question. But to me, it’s what happened after that I’m proud about, actually … ”

Brind’Amour spends about three seconds on the fact that one of his colleagues was punching people in the workplace. Then he’s off onto a planned talking point about everyone holding hands in the locker room and using an unprovoked assault as a team-building exercise.

It’s the casualness that strikes you. The tone of, “Oh, that punch.”

If you are Gordie Howe tough, you don’t go around hitting people for no reason. You don’t slur your co-workers. You don’t take apparent pleasure in demeaning people and then claim you can’t understand how they could be offended.

Well, not any more.

One can imagine all the coaches at various levels of professional hockey thinking about their own apologies right now. How would they say sorry for that time they lost control and crossed an uncrossable line? Because that line has started to move – and quickly.

You know how proper tough guys apologize? They say they’re sorry. And if they’re not sorry, they don’t bother with a pretend apology.

The sad thing here is that Aliu has said that if Peters had just said sorry in the moment, he would have let it go. In the schoolyard-fight way of things between men, they might’ve even reached some measure of actual respect and mutual understanding.

But Peters apparently couldn’t do that. Because, I guess, he is so tough.

This is why the Peters apology belongs in the Hall. As a reminder of where that brand of toughness gets you. 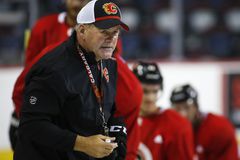