The show of unity by Black Players for Change ahead of the MLS is Back Tournament opener on July 8 in Florida was raw, emotional and powerful.

As Orlando City and Inter Miami players took a knee ringed around the centre circle prior to kickoff, about 170 Black players, coaches and staff from around the league entered the field. Dressed in black with T-shirts carrying message such as “Silence is Violence,” “Black Lives Matter” and “Black and Proud,” they stood in a giant rectangle with black-gloved fists held high.

The silent demonstration lasted eight minutes 46 seconds, the time a Minneapolis police officer had his knee on George Floyd’s neck when he died.

Five months later, Black Players for Change continues to make its mark. On Tuesday, MLS announced the group had been named the 2020 MLS Works Humanitarian of the Year. MLS Works serves as the league’s “social responsibility platform.”

It marks the first time since the award started in 2000 that it has gone to a group rather than an individual.

“It’s been very important for us this year to be united and speak as one voice,” said Toronto FC fullback Justin Morrow, the group’s executive director. “That’s why I’m so thrilled and we are so thrilled that we’re winning Humanitarian of the Year as a group.

“Because everything that we’ve done as an organization has been built on the backs, the hard work of all of our group. We’ve had some successes. We’re still fighting some battles. We will continue to fight those battles. We’re making sure that we will not go away and this organization will be for future generations.”

The group’s goals are to “to advance the attention on human rights inequalities from protest to programs, partnerships and policies that address systemic racism.”

Or to help people – and make things right.

In September, the organization announced plans to build 12 mini-pitches over the next year in conjunction with Musco Lighting, Adidas and the U.S. Soccer Foundation. The pitches aim to break down barriers that have kept children of colour from playing soccer, with the first unveiled in October at a high school in Newark, N.J., in partnership with the New York Red Bulls.

Black Players for Change also partnered with several groups to lead the charge to get the vote out during the November U.S. election.

“This organization, this group of men have been able to accomplish amazing things in a very short amount of time and that’s due to how much work we put in,” the 33-year-old Morrow said.

An 11-year MLS veteran, Morrow says expanding the Black Players for Change organization has been a chaotic effort at times “in that we were handling things as they were coming.”

That included Aug. 26, when players decided not to take part in five MLS games in solidarity with teams from other sports protesting the police shooting of Jacob Blake in Wisconsin.

Black Players for Change’s goal in Year 2 is to become “more focused” and to amplify efforts by its membership while continuing the fight for racial equality.

“We said from the very beginning that we felt that MLS clubs weren’t doing enough in their local markets,” Morrow said.

He pointed to organization such as Sacred Seeds, formed by veteran forward CJ Sapong to provide education, nutrition and community building.

Morrow says some players will continue to show their feelings at future games.

“It’s very important and there’s a lot of us that feel the need to still take a knee during the national anthem to continue this message,” he said.

The fact that some fans at England’s Millwall booed players taking a knee before a Championship game on the weekend shows there is more work to do.

“I think there’s just a lack of understanding of the deeper roots and causes for players’ willingness to stand up for something they so strongly believe in,” said Quincy Amarikwa, a former Toronto FC and Montreal forward who is on the board of Black Players for Change.

“And I think what’s most difficult is when people aren’t open to the idea that they could be wrong. That’s really what the problem is.”

In recognition of the humanitarian efforts of Black Players for Change, MLS Works will donate US$5,000 to the organization.

MLS commissioner Don Garber says no word yet on where Canadian teams will play in 2021
Subscriber content
December 8, 2020 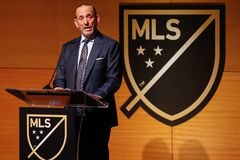 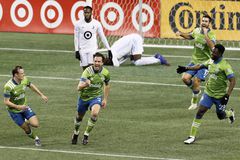 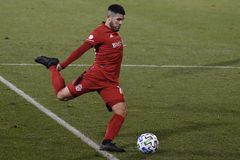