For this day, at least, the kids were all right.

In a series in which they were getting their lights punched out, the Toronto Blue Jays countered with a heavy dose of their youth movement to pound out a 10-1 victory over the San Diego Padres at Rogers Centre on Sunday.

Greenhorn Cavan Biggio and relative greenhorn Lourdes Gurriel Jr. led the Blue Jays (21-32), each poking a home run to prevent a three-game sweep at the hands of Padres (28-25), who were trying to get by on a patchwork pitching day.

Together, the pair accounted for seven of Toronto’s 17 hits.

While he was not as prominent in this one, 20-year-old rookie Vladimir Guerrero Jr., handling the designated hitter’s duties, chipped in with three hits, including a double.

Not to let the younger ones have all the fun, veteran first baseman Justin Smoak swatted two home runs – a two-run shot in the fifth and then a three-run job in the eighth, giving him a team-best 11.

The primary beneficiary of the sudden influx of offence was Toronto starter Marcus Stroman (3-6), who strolled through five innings in which he allowed one run and five hits. It was a gutsy performance in more ways than one; Stroman was ill with a stomach ailment.

After being starved for offence for most of his starts this season, the Blue Jays have totalled 20 runs in Stroman’s past two outings.

The Blue Jays have been getting hammered as of late, embarrassingly so – which is not surprising given the porous nature of their lineup, especially the starters, who have been hit by injuries.

In the first two games of the series, the Blue Jays were outscored 25-7 and outhit 27-7. In Saturday’s 19-4 blowout, in which the Padres hit a franchise-best seven home runs, the 19 runs allowed by Toronto was tied for fourth-most in team history.

On Sunday, with Gurriel and Biggio doing most of the heavy lifting, the Blue Jays finally displayed something resembling a pulse.

At 25, Gurriel has one season under his belt, although, he only logged 65 games in his rookie campaign.

After making the team this year out of spring training, Gurriel lasted only 13 games before a slumping bat and defensive misgivings at second base led to a demotion to Triple A in Buffalo.

After six weeks in the minors, where Gurriel was given a crash course in playing the outfield, he was recalled to the Blue Jays on Friday and has looked sharp.

Sunday’s home run, off San Diego reliever Matt Wisler in the fourth inning, was his third in as many games. Gurriel also cranked out a run-scoring double in the fifth and finished 4-for-4, a triple shy of hitting for the cycle.

Gurriel also proved to be a fast learner, making a fine defensive play in the fourth from left field when he threw out Eric Hosmer, who misguidedly tried to stretch a single into a double.

Not to be outdone, the 24-year-old Biggio, who made his major-league debut on Friday, collected his first big-league hits on Sunday during a 3-for-4 afternoon.

That included the second baseman’s first home run when he went back-to-back with Gurriel in the fourth to put the team ahead 3-0.

“That one inning when Gurriel went deep, then Biggio – that was fun to watch,” Toronto manager Charlie Montoyo said. “It gave me the chills. That’s why I love this job, that’s why I came here, to see that. That was fun.”

After the game, Biggio met the media while wearing a “We The North” Raptors T-shirt.

After going 0-for-6 in his first two games, Biggio said he could feel the pressure to get his first big-league hit.

The Blue Jays got a bit of a break when they learned that San Diego rookie Chris Paddack, who was supposed to start on Sunday, was scratched after waking up with a stiff neck.

Paddock has been phenomenal, the only pitcher to debut since 1893 (when the mound was moved to its current distance) to record at least 56 strikeouts while allowing 42 or fewer base runners through his first nine career starts.

That necessitated the Padres pushing Robbie Erlin into the starting role. He lasted two innings and allowed the first run off five hits. 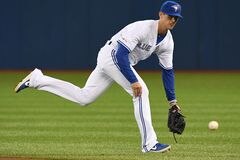