You could say that Clayton Richard was trying to channel his inner Kawhi Leonard for Thursday night’s game pitching for the Toronto Blue Jays.

Of course, it helped that the NBA Finals most valuable player for the Toronto Raptors was attending the baseball game against the Los Angeles Angels, sitting in choice front-row seats right beside the Blue Jays dugout.

That key to the city that Leonard was given by Toronto Mayor John Tory at Monday’s championship parade really does open some doors.

As for Richard, he wasn’t shooting for something so glorious or glamorous as an NBA championship. He just wanted to earn a simple pitching win, something he has not been able to crow about in almost a year.

Despite an early lead, Richard was once again denied his chance for some mound success and departed with a no-decision.

But all was not lost as Billy McKinney would swat a two-run walk-off home run in the bottom of the 10th inning off L.A. reliever Ty Buttrey to secure a 7-5 Toronto win.

Richard, a 35-year-old lefty, last won on June 22 of last season when he was still a member of the San Diego Padres and defeated the San Francisco Giants 6-2.

Heading into Thursday’s contest, Richard had gone 0-8 over his 16 starts since then, including 0-3 in five outings for the Blue Jays this season.

The sporadic Toronto offence sprung to life in support of Richard early on, with Teoscar Hernandez knocking a two-run home run in the Blue Jays’ three-run first inning for an early 3-0 lead.

Eric Sogard and Lourdes Gurriel Jr. also homered for the Blue Jays in the game, all off Angels starter Jose Suarez.

Richard would pitch into the sixth with a 5-3 lead but would see his night end when he issued a leadoff walk to Kole Calhoun and turned the ball over to the bullpen.

Despite his string of hard luck, Richard pitched well on this night, allowing four L.A. runs off six hits over five-plus innings of work.

Luis Rengifo, who stroked a two-run homer for L.A. back in the second inning off Richard, singled with the bases loaded off Joe Biagini to cut the Toronto lead to 5-4.

Albert Pujols knocked a sacrifice fly in the top of the seventh to tie the game at 5-5 to end Richard’s chances of finally recording his long-awaited W.

Angels star Mike Trout continued to demolish Toronto pitching, enjoying a 2-for-4 night with a walk. Through the four-game set, Trout hit .529 (9-for-17) with three home runs and 10 runs batted in.

Before the game, as anticipated, the Blue Jays activated closer Ken Giles off the injured list, where he landed on June 9 with right elbow inflammation.

Giles had been enjoying a great season up until his injury, with 11 saves and a 1.08 earned-run average. The faster he gets back up to par the better for the Blue Jays as the 28-year-old is expected to be one of Toronto’s better trade chips heading into the July 31 trade deadline.

With the four-game set against the Angels mercifully completed, the Blue Jays will now embark on a six-game American League East divisional road trip, starting with a weekend series in Boston followed by a three-game trip to New York.

With starter Edwin Jackson having conveniently landed on the injured list with a bad back after his last shelling on Monday in a 10-5 L.A. win, the Blue Jays have yet to announce who will start in place of him for what would have been his next scheduled start on Saturday in the second game against the Red Sox.

Toronto manager Charlie Montoyo said the team has options. But he said the decision will be based on what unfolded in Thursday’s game and whatever might happen on Friday. 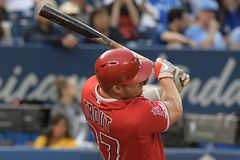 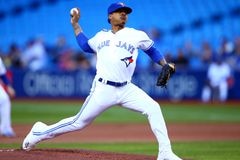 Edwin Jackson gets torched as Toronto Blue Jays fall to Los Angeles Angels
Subscriber content
June 17, 2019
Follow us on Twitter @globe_sports Opens in a new window
Report an error Editorial code of conduct
Due to technical reasons, we have temporarily removed commenting from our articles. We hope to have this fixed soon. Thank you for your patience. If you are looking to give feedback on our new site, please send it along to feedback@globeandmail.com. If you want to write a letter to the editor, please forward to letters@globeandmail.com.
Comments