Toronto Blue Jays president Mark Shapiro has been so consistently murdered since he arrived here four years ago there ought to be a scientific inquiry to determine how he is still alive.

In his opening news conference, Shapiro did everything wrong. He kicked off with a ‘tough-times-coming’ approach just after a playoff run. He claimed to love the city, then could not list a single specific thing he liked about it. After functionally firing the GM, he wondered why the media kept asking him about it – “We’ve talked about moving forward.” Nobody was sure who the “we” was.

That first impression set the tone – the fan base would agree not to like Shapiro very much; and Shapiro would avoid talking to the fanbase as best he could.

Shapiro is like other modern sports executives, but much more so. He is a process-driven man, whether or not the process works. He believes in numbers and systems, because those can be spun out to tell any story you’d like to hear.

But if other guys are backroom wonks, Shapiro is the Robert McNamara of Major League Baseball. There is a plan. He does not deviate from it, even as the losses pile up.

On Thursday, Shapiro came out again to explain what the club is up to. And by “explain,” I mean to create a wall of jargon so high and thick that you could not get over it with a helmet and a cannon.

He began by saying he could understand the “frustration” felt after a trade deadline, and then explained why he couldn’t.

“There are things I’m thinking about and seeing that are not as tangible as what you’re looking at,” Shapiro said.

The intangible things are, well, intangible. There are the pitchers who are not yet in the major leagues, the theoretical free agents who might yet be signed and the inevitable leaps in quality that are just about to happen.

Fair enough. But this would have been a good opportunity to give people an estimate of when all that is solid really does melt into air. As in, when will all the magical things only Mark Shapiro can see result in a non-crappy baseball team that the rest of us can as well.

That’s where things get even more intangible.

“You have to understand that with human beings there’s no finite date that we can give, but we’re not going to set a limit to how soon that can happen and we hope that that can happen faster than anyone thinks is possible,” Shapiro said.

Imagine giving this answer if the question was instead, “When should I be expecting the rent from you?” And then imagine living at the bus station.

In trying to balance this philosophical see-saw – ‘We’re on the right track’ and ‘You never do know with tracks cuz they turn’ – Shapiro was a bit all over the place.

On the one hand, the Jays may be free-agent players this off-season. But on the other, “It’s going to be a tough environment [for buying] this winter.”

On the one hand, the Jays may be great, like, tomorrow. On the other, Shapiro’s vision for next season is to “continue the progression of our core competing to win.” In other words, to continue losing on the steady.

On the one hand, all their trades have been good ones. On the other, trades are impossible to judge until years later.

It’s becoming clear what the real goal of this rebuild is – pushing the end date of the rebuild into infinity. It’s a surprisingly simple thing to do.

First, never promise anything. Second, never care what people think of your non-promises.

Most sports execs have the first part down, but the second pains them. After a certain amount of public outrage, they crack, often in front of a microphone. After a while, they’re on a mission trying to get themselves fired.

In this sense, Shapiro is perfectly suited to his position. The less tenable his position becomes, the less likely he is to care what people think of him.

Every time he gets bricked in public, he pops back up with that same placid smile and circular talking points. I say this with no small amount of admiration – Shapiro may be the only person in sports who is truly immune to criticism.

Since actual baseball is off the table for the next while, this act has become the most interesting thing about the Toronto Blue Jays. How long can they keep this up? How long can they continue to convince people that everything is headed in the right direction, even if it never gets anywhere at all?

Shapiro has found a way around this problem: Never admit there is a problem.

As long as he is willing to straight-facedly tell people the good times are around the corner – not close, but around there somewhere – there isn’t much that can be done to refute him. Whenever you try, he goes back to the line about the intangibles that can only be perceived if you work at 1 Blue Jays Way.

The intangibles defence worked last year, it’s working this year and so there is no reason it can’t work every year from now on.

It will continue to work as long as Shapiro never shows a hint of doubt, because there is no arguing with a true believer. For them, plagues are just as much proof of the grand plan’s existence as miracles.

In the end, Shapiro may never give Toronto baseball fans what they (wrongly) believe they’ve been promised. But as long as he never concedes that possibility, the platonic ideal of a baseball team is always still coming. 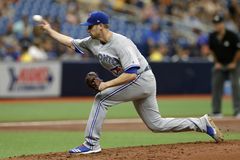