It is an interesting time of the year to be the general manager of the Toronto Blue Jays.

On one hand, you have the annual draft – three days and 40 rounds of crystal-ball gazing that finally ground to a halt on Wednesday, an arduous organizational process that Ross Atkins hopes will lay the groundwork for future success.

It is a time for long-range optimism and an opportunity for the American League club to display a touch of class. The Blue Jays selected Braden Halladay, the 18-year-old pitching offspring of Roy Halladay, in the 32nd round, the 957th player chosen over all.

There is just a bit of symmetry to the occasion as the elder Halladay, of course, popularized No. 32 as he became the most beloved pitcher in Toronto history during a memorable 12-year run. He died in a plane crash off the coast of Florida in 2017 at the age of 40.

Drafting his son was purely a symbolic gesture by the Blue Jays as Braden Halladay has no intention of walking away from a U.S. college commitment this fall where he will continue to chase his baseball dreams.

“We obviously know the family well, know him well, and spent time with them,” Atkins said on Wednesday. “He’s headed to Penn State, and we’re glad to have drafted him.”

Then there’s the more pressing realities of trying to navigate the choppy waters of this season, as Atkins and manager Charlie Montoyo struggle to remain relevant in the competitive Toronto sporting market during a rebuild.

Tear-downs are never easy and heavy losses were anticipated, but the Blue Jays were especially brutal heading into their current home stand against AL East divisional rival New York Yankees.

Toronto (23-38) has at least displayed something resembling a pulse in the first two games at Rogers Centre against the front-running Yankees (38-22). The Blue Jays churned to an exciting 11-7 win on Wednesday, their second win in a row over the Bronx Bombers.

Trailing 7-6 heading into the eighth inning, it was super rookie Vladimir Guerrero who clinched a back-and-forth affair, nailing a Zach Britton offering over the wall in centre for a three-run shot that lifted Toronto in front.

Guerrero’s homer, his first game-winner, was his seventh in the 33 games he has played since getting called up from the minors.

It was one of three homers the Blue Jays had in the eighth. Randal Grichuk, with his third HR in two days, and Brandon Drury had the others.

The Blue Jays had slunk back into town after going 0-for-6 on a disastrous trip through Tampa Bay and Colorado. And that was on the heels of a 2-5 disaster against Boston and San Diego at Rogers Centre where the Blue Jays were outscored 55-36 while being outhit 85-54.

While it certainly looked as though the players were about to wave the white flag early in the season, Atkins begs to differ.

“We certainly never expected to have a road trip where we don’t win a game and don’t expect to have these lulls,” Atkins said. “At the same time, understand they’re a possibility. It’s not affecting our players in a negative way where they are going to become comfortable with losing.”

The GM said he was surprised by the hefty losing record the team carted into Wednesday’s game. “We didn’t expect to be where we are,” he said. “We thought we’d be in a better position at this point.”

Atkins didn’t even seem to be phased by the comments last week of demonstrative starter Marcus Stroman, who groused after a loss to the Rockies that the atmosphere surrounding the team is about as fun as tax time.

“Marcus is a very honest and up-front person who wasn’t feeling that it was positive at the moment,” Atkins said. “Our group, our core group … they’ve been steady and the atmosphere has been steady. Charlie’s done an incredible job of staying exceptionally positive and we’ve obviously had a tough stretch.”

The Yankees started James Paxton, a native of Ladner, B.C. They were hoping the lefty might be able to weave some of the magic he spun the previous time he faced the Blue Jays, May 8 of last year at Rogers Centre when he tossed a no-hitter when he was still a member of the Seattle Mariners.

Paxton did not quite have the same experience, getting knocked around for four runs off four hits over 4 2/3 innings. He departed the game in the fifth with the score 4-4. 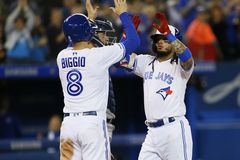 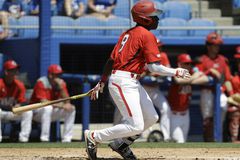 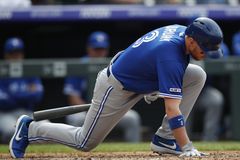