The American League’s most-valuable-player in 2015 was reportedly traded on Friday night to the Cleveland Indians.

The move, which had not been officially announced by the American League club, will no doubt be galling to supporters of the team as Donaldson will be joining Edwin Encarnacion, another former franchise icon who left after the 2016 season.

It is not yet known which players the Blue Jays received for the third baseman, but Donaldson’s once sky-high value had diminished significantly the past two years after a string of injuries kept him off the field for long periods.

Donaldson only cleared waivers Friday afternoon, meaning the Blue Jays could freely negotiate with any team.

But in order for Donaldson to be able to play in the postseason, the trade had to be made final before 11:59 p.m. (ET) as per Major League Baseball guidelines.

The news of the trade broke around 9 p.m.

The Blue Jays will play host to the Indians for a four-game set at Rogers Centre beginning Thursday.

The team reportedly made another deal, sending veteran outfielder Curtis Granderson to the Milwaukee Brewers for Demi Orimoloye, a minor league player.

Donaldson has been on the disabled list for Toronto since May 29 dealing with a strained right calf muscle. Players can only be traded once they are deemed healthy, the MLB guidelines say.

The third baseman only played in his first rehab game on Tuesday night in Dunedin, Fla., for Toronto’s Class-A affiliate. It was widely reported that the club then placed him on revocable waivers on Wednesday afternoon, a process that lasts 48 hours.

Donaldson was slated to play in another rehab game that night but rumours surfaced he was sore after his game on Tuesday and would not play. It was a moot point as the game was rained out.

On Thursday night, in the first game of a doubleheader, Donaldson started his second rehab game at third and hit a home run in his first at-bat. He played six innings and went 1-for-3.

Donaldson’s waiver period ended Friday afternoon, giving the Blue Jays scant hours to try to scrabble a deal together ahead of the looming deadline.

And given that Donaldson has been injury prone the past two years and is still owed around US$4-million of his US$23-million 2018 salary, the open-market value for the American League’s 2015 most-valuable-player had plummeted.

Although he only played in Toronto for four seasons, Donaldson has undoubtedly secured his position as one of the best Blue Jays to play third base.

Donaldson came to Toronto in November, 2014, in a trade by then general manager Alex Anthopoulos, that is regarded as being lopsided in the Blue Jays' favour.

After helping to lead the Oakland Athletics into the postseason the previous three seasons, Donaldson was shipped to Toronto for Brett Lawrie and three minor-leaguers – second baseman Franklin Barreto and pitchers Kendall Graveman and Sean Nolin.

Lawrie, also primarily a third baseman, is currently out of the game; Nolin has not pitched in the majors since 2015; Graveman underwent Tommy John surgery earlier this season and is out for at least a year; and Barreto has played in just 23 games for Oakland in 2018.

In Donaldson’s first year with Toronto, he hit a torrid .297 with 41 home runs and 122 runs batted in. That helped the Blue Jays reach their first AL East Division crown since 1993.

For his efforts, Donaldson was chosen the AL’s most valuable player, just the second player in franchise history to get the award. Outfielder George Bell won in 1987.

Donaldson enjoyed another solid season in 2016 and helped the Blue Jays to a second consecutive playoff appearance before injuries started taking a toll.

After missing a combined total of just 11 regular-season games through his first two years in Toronto, injuries limited Donaldson to 113 games in 2017 and just 36 this season.

It was felt that the Blue Jays would try to deal Donaldson after last season, when his value was still relatively high. But the club made the gross miscalculation that it would be a contender this year and decided to roll the dice that the third baseman would return to form.

When that didn’t happen, and Donaldson was joined on the sideline by shortstop Troy Tulowitzki, whose ongoing foot issues prevented him from playing a single inning, Toronto’s hopes of challenging faded early.

Still, the Blue Jays felt that trading Donaldson now, even at a bargain-basement rate, was better than the other options

If he were not dealt, Toronto could have let Donaldson walk away for nothing.

Or, the Blue Jays could have offered him a qualifying offer for the 2019 season, which will probably be in the vicinity of US$18-million.

If Donaldson were to decline such an offer and opted to test the free-agent market, the Blue Jays would at least get a draft pick when he signs with another club.

The danger in this scenario is that Donaldson would accept the offer which is not something the Blue Jays reportedly would like to happen.

Given his age, Donaldson is not seen as a part of a rebuild the club is embarking on. And they already have one of baseball’s top offensive minor-league prospects in Vladimir Guerrero Jr. waiting to step in at third next season. 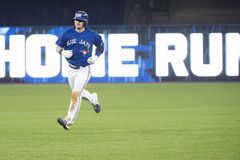