However bad you feel right now, take comfort in this: You are not Justin Morrow.

Morrow has been a low-profile constant for Toronto FC during the Major League Soccer team’s renaissance. There was a moment in the city when this team was, like Obi-Wan Kenobi, its only hope.

Morrow wasn’t a bold-face part of that, but he is an important one. An under-the-radar guy. A critical piece.

He’s had two really big individual moments with the team, which on Sunday lost the MLS Cup final 3-1 to the Seattle Sounders.

Morrow’s first big moment cost Toronto FC a championship in 2016. After a grinding final against Seattle, one in which Toronto had been far the better team, he hoofed a penalty kick against the underside of the crossbar. And that was it.

Toronto won the title the next year. Indirectly, that victory presaged the Raptors NBA championship run and the Maple Leafs’ return to relevance. It proved Toronto could win things, that that was allowed. It was a seminal moment.

On Sunday, after a few years of keeping his head down and plugging away, Morrow resurfaced in the national highlight reels.

This final was much like the one three years ago. Toronto was by far the better side. Seattle wasn’t just ineffective, it was disengaged. It was as though the players had pooled their money on a prop bet that the game would end without a goal after regulation.

In the 57th minute, against the run of play, Seattle accidentally found itself in the Toronto end. Kelvin Leerdam took a speculative shot that was going well wide. Morrow had already made one mistake – failing to move up with his line of defenders and thereby playing Leerdam onside. Then he made a far worse one – extending his front leg as the ball approached him. The shot caromed off his knee and into the Toronto goal.

And that was it again.

The game didn’t flip, so much as somersault. For the remaining half-hour, Seattle battered Toronto. The Sounders scored two more goals. The game ended 3-1.

Thirty minutes. That’s how long you can leave a dream postseason run on the counter before it goes bad.

It is hard to remember now, but there was a time when this city could claim to be the only one that cared about Major League Soccer.

Not care as in ‘know a soccer team exists somewhere in this municipality’. But care care. Show up win or lose. Force people who do not like soccer to reckon with soccer.

That blueprint has been replicated in Seattle, Portland, Atlanta and other places. Even ones that didn’t care until quite recently.

It will be replicated again in the five new franchises that join the league in the next few years. MLS cities that put soccer at the centre of their sports culture are now the rule rather than the exception.

If MLS can be considered a success, two things made that possible – David Beckham and Toronto FC.

They had deservedly been to the top and, as always happens, gravity was carrying them back to the middle.

Two unremarkable regular seasons followed the championship one. The fervency of the climb was wearing off. People still cared, but a bit less. The other teams in Toronto had got better. The team’s pillar, captain Michael Bradley, was nearing the end of his road.

Toronto FC was returning to its natural place – fourth or fifth in the civic pecking order. A good team, but not a great team. Just barely a postseason team.

Then, out of the nowhere, this month-long gallop through the playoffs. It would have been unlikely under any circumstances, but it was close to miraculous considering that the only guy on the team who can make his own luck near goal, Jozy Altidore, was out injured. Every one of the three wins en route to the final was a scrambling, last-minute affair.

Toronto FC was notching another first in recent Toronto sports history – a team that really shouldn’t win, but does so anyway. But that’s the thing about luck – it turns on you.

The first 60 minutes of Sunday’s final may have been Toronto’s best combined effort of the year. Until they weren’t.

Morrow just happened to be the guy in luck’s way when it swung. Let’s hope fate is done with him now. Nobody deserves this much attention.

At the end, as Seattle celebrated, the camera cruelly focused in on Morrow. He looked beyond despair.

It’s been reported that Bradley has a clause in his contract that would have re-upped him for another year at US$6.5-million had Toronto won this game. He wouldn’t talk about it, but he certainly played like it.

In the aftermath, he looked the least disconsolate of all. Instead, he seemed defiantly upbeat. He made a great point of saluting Toronto’s travelling support in the audience.

If this was it for Bradley in Toronto, it’s a good way to go out – refusing to be bowed. There may never have been a pro athlete in Toronto who so embodied the value of treating every game as though it were his last. He was the heart of it all.

So it’s hard to feel bad about the way it turned out. Toronto FC was born in disappointment. For a long time, losing was the team’s identity. Now the team has learned to lose with something like valour. There’s no shame in that. Quite the opposite.

After a defeat like Sunday’s, you begin your Intro to Philosophy 101 section of the sports curriculum.

Is it better to lose when you are expected to do so, or do so right at the end after you’ve raised expectations?

It’s always the latter. Because the goal of sports may be winning, but the point of it is in creating expectations. 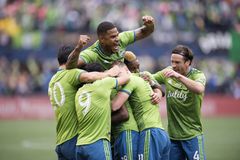