A chill Brad Gushue is a problem for opposing teams at the Canadian men’s curling championship.

Gushue and his team from St John’s, N.L., seemed to channel The Dude from “The Big Lebowski” en route to winning the Tim Hortons Brier in Regina in 2018.

Having won it for the first time in 2017 after so many years of trying, and in Gushue’s hometown no less, the pressure in Regina felt light by comparison.

“I hope so,” Gushue told The Canadian Press. “There hasn’t been many teams that have won it back-to-back and to have done that gives us a little bit of house money to play with.

“When you play as many as I did without winning and having come as close as we had for a number of years and not winning one, the pressure became borderline uncomfortable. When you finally get that monkey off your back, it certainly freed us up. It did last year and I anticipate it’s going to be similar this year.

“If we don’t win, we’ve still won twice. On the other side, we certainly feel like we’re capable of winning and if we perform well, we should be there at the end of the week.”

The Brier returns to Brandon for the first time since 1982, when Northern Ontario’s Al Hackner beat B.C.’s Brent Giles for the title.

Edmonton’s Brendan Bottcher and Toronto’s John Epping square off Friday in the win-and-get-in, wild-card game for the 16th and final berth in the main draw.

Gushue and company can join Alberta’s Randy Ferbey (2001-03) as the only teams in history to win three straight titles.

Gushue isn’t preoccupied with the prospect, but the man making his 16th Brier appearance is aware it’s a talking point around his team.

“I do know Randy is the only team to have done it,” Gushue said. “I’m not going to lie and say it wouldn’t be nice to have, but it’s not something I think about on a daily basis.

“I’m sure I’ll think about it a lot Friday because I’m going to get asked the day before it all starts.”

If there are people who think Ferbey’s three-peat deserves an asterisk because Kevin Martin, Jeff Stoughton and Kerry Burtnyk boycotted national playdowns those years to push a Grand Slam series and wrest more financial benefits out of Curling Canada, Gushue isn’t one of them.

“The whole asterisk thing, I don’t believe there should be one there,” Gushue said. “Obviously not having some of the Slam teams there, that changed things, but it’s still hard to win no matter who is there.

“You’ve got to give Randy and his team credit. They won the Brier, they won it fair and square and beat all the teams.”

The 2019 field contains many of the usual suspects in elite Canadian men’s curling, albeit in some different combinations.

Brandon native McEwen was throwing fourth stones and vice Carruthers calling the shots to start the season, but McEwen has taken over as skip of the host province.

Northern Ontario’s Brad Jacobs is back with the same foursome that won the 2013 national championship and an Olympic gold medal in 2014.

After wins in 2010, 2014 and 2016, Alberta’s Kevin Koe can join Ferbey, Martin and Saskatchewan’s Ernie Richardson as the only skips to win four Canadian titles.

“Scott McDonald has a top-10 team this year on tour and have worked their way up to the Grand Slams,” Gushue observed. “Any team that can do that is certainly capable of winning the event.”

This is the second year of the most recent format devised by Curling Canada for the national men’s and women’s championship.

The 16 teams are divided into two pools. The eight teams with the best records after Wednesday advance to a championship round. The top four from that group advance to the Page playoff.

The winner of the March 10 final wears the Maple Leaf at the world men’s curling championship March 30 to April 7 in Lethbridge, Alta., returns to the 2020 Brier in Kingston, Ont., as Team Canada and wins $70,000 in prize money. 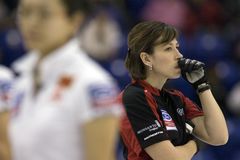 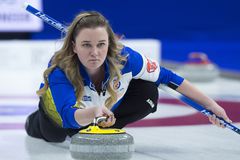