While cheering his fellow swimmers in the Tokyo Olympics pool this week, 37-year-old Brent Hayden tweeted a photo of himself with the caption, “Feeling like a proud grandpa.”

But he’s not old old.

The 6-foot-4, 190-pound swimmer from Mission, B.C. – the bald one, the only guy without a cap – will swim the 50-metre freestyle in Tokyo on Friday, his only individual event of these Olympics. At the Canadian Olympic trials, he was the country’s top swimmer in the event, clocking the second-fastest time in his career – 21.82 seconds, just shy of his own national record of 21.73, which he set in 2009. He’s keeping pace with his much younger self.

Hayden doesn’t have a lot of miles on his body like many athletes would at 37. That’s because he took seven years off from the sport after he made the podium at the 2012 London Olympics, before deciding to plunge back in and try to make a comeback for Tokyo – his fourth Olympics.

Suffering with agonizing back pain and crushing depression, he stepped away immediately after racing to bronze in the 100-m freestyle in London, announced his retirement publicly and suddenly, right there in Canada House.

“That whole last year leading up to that medal was just so awful, with my depression and just dealing with my injuries, I just couldn’t keep going forward,” Hayden told The Globe and Mail in an interview before the Olympics while still in Canada. “I wasn’t enjoying it, like I hated swimming.”

In the years since, he married singer Nadina Zarifeh, he focused on helping her further her career, and they spent time in Egypt. Together they created a swimming curriculum to teach to swim clubs across Canada. Being in a pool himself wasn’t enjoyable, but finding another way to give back felt good.

Eventually as their business succeeded, they decided to film a teaching video they could put online. Doing that, at a stunning pool in Beirut in the summer of 2019, he rediscovered his passion for the pool again. And much to his surprise, he was still fast. He ran the idea of a comeback past some other swimmers before he contacted Swimming Canada, then his old coach, Tom Johnson.

“He was able to articulate fairly well that he felt like he had moved beyond those points, and he has lots of good things in his life, from his marriage to his business,” Johnson said during the Canadian Olympic trials. “It’s kind of like you’re talking to a mature individual now. … When Brent makes up his mind and he wants to do something, he’s a pretty determined guy, and he’s one of the most natural racers I’ve ever coached.”

Before the COVID-19 pandemic hit, Hayden had a fantastic meet in Des Moines, Iowa, swimming the 50 metres in 21.97, under the FINA standard, and the 100 metres in 49.46. His times were internationally competitive and Johnson was convinced “this comeback is real.”

When COVID-19 restrictions shut down pools across Canada, he got a wetsuit, got over his discomfort with swimming in large dark bodies of outdoor water (as a little child, he says, his sister scared him into thinking the Ogopogo lake monster would get him off the dock). So he began regular open-water swims in the cold British Columbia waters of Sasamat Lake at Port Moody. He came to enjoy it – the other outdoor swimmers, the freedom to swim whatever direction he wanted, and the company of birds flying overhead. He swam in his parents’ backyard pool, too. That commitment to outdoor swimming – even in the freezing cold lake – convinced his coach he was driven.

As his training resumed in Vancouver-area pools, his coach could tell he was serious as he travelled in from New Westminster to the University of British Columbia. He even decided to swim in the International Swimming League last fall, a new co-ed team-based pro swim league. He swam for the Toronto Titans as the team competed in Budapest for five weeks, not allowed to leave the competition’s bubble on the Hungarian capital’s Margaret Island because of health-safety protocols. The passionate photographer brought his Hasselblad camera along to focus on his love of capturing photos.

He took the time during COVID-19 to build a dark room in his parents’ basement so he could develop his photos the old-fashioned way, just like he used to in high school.

“Photography for me is, it’s kind of an escape from everything else,” Hayden said. “Actually seeing my photos framed and mounted actually hanging up in someone’s home where they can enjoy it. Yeah. That is the best feeling.”

His other passions give him better balance in life than he had back when swimming was making him miserable. At last month’s Canadian Olympic trials, after he won the 50-m freestyle to book his spot for Tokyo, he said, “I’ve never been this excited to make an Olympic team.”

He won’t swim the 100-m freestyle in Tokyo – he and his coach decided to scratch that race at the trials because his back was on the verge of spasms, and he wanted to play it safe so close to the Olympics since he had already qualified in the 50-m. (“In my previous life with him, I would have pushed him through it,” Johnson said.) The 50 metres is all raw power and speed; he won’t need to worry about endurance.

Earlier this week in Tokyo, Hayden swam leadoff for the Canadian men’s 4x100-m freestyle relay team, which finished just off the podium in fourth place – a surprise in the powerhouse men’s field. Along with Yuri Kisil, Josh Liendo and Ruslan Gaziev, they swam in 3:10.82, shaving more than a second off the Canadian record.

Hayden has been a leader to Canada’s younger swimmers – many of whom weren’t born when he made his first national team in 2002, including 18-year-old Liendo.

He is the oldest swimmer Johnson has coached. Johnson utilizes a book called Play On, which has tips on how the superstar athletes – such as Tom Brady or Roger Federer – recover and train into their older years.

“He continues to believe in me and I continue to believe in him,” Johnson said. “I think he’s got more life experience now and an ability to realize that he can control those things, where in the past they would control him. He’s got other things that are part of who he is, and he’s not so overly invested in only one thing.”

Hayden has been joking about his age on social media a lot during the Tokyo Games, this week posting a photo of an old grey-bearded man with the caption, “I’m in my prime.”

“To everyone who thinks 37 is old,” he wrote. “#ageisjustanumber.”

From dresses and skorts to hijabs, badminton’s women Olympic athletes wear what they like in Tokyo
Subscriber content
July 28, 2021 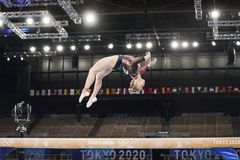 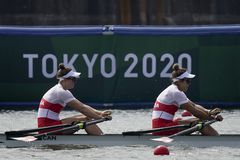