Though you may not have heard of him yet, you are going to love Teofimo Lopez.

Lopez, a 23-year-old contender, combines those circus attributes that typify the greatest boxers – he is simultaneously the lion and the ringmaster.

Lopez is a lightweight possessed of uncommon power. He is so talented, he devotes most of his energy to tinkering with his hype machine.

Every knockout (and there have been a few) is followed by a standing backflip. When asked to compare himself to his predecessors, he name-checks Albert Einstein.

Lopez is fun without being clownish. He is fierce without being monstrous. He is a human meme so well-suited to the age you wonder if he was designed rather than born.

All he has to do now is what he’s repeatedly promised – beat the best boxer in the world on Saturday night.

That would be Vasyl Lomachenko. There are a very few athletes you remember like grade-school crushes – you fell hard the first time you laid eyes on them. The Ukrainian is that for me.

Lomachenko fought on the undercard of 2015′s Manny Pacquiao-Floyd Mayweather tilt – the fight of the century (so-called). I was sitting bored out of my mind in the media tent bidding adieu to my East Coast deadline when Lomachenko came on. I’d never heard of him and didn’t much care. But once he went to work, you could not look away.

Lomachenko is most famous for his footwork. Footwork is to boxing what foundations are to architecture – nobody plans their vacations around a foundation, but without it, there is no Duomo.

His signature move is a quick hop he uses to get inside on opponents. It doesn’t sound like much when you read it here, but when you see it done you are left wondering if Newton got this whole physics thing wrong. The Ukrainian seems to teleport around his man, stepping inside or around his defence, and at ridiculous speed, firing off a shot or two and then retreating. It’s most impressive when Lomachenko suddenly appears – ha HA! – beside the other fighter.

Many people consider the 32-year-old – like many post-Soviet boxers, a professional late bloomer – the best fighter at work. Some rank him as the best alive. Either way, Lomachenko is the most artistic.

On that basis, what we have on Saturday night is Caravaggio versus Rembrandt. A prodigious genius versus the master who reinvented technique.

It’s the fight of the year. Given the circumstances, it might be the sporting event of the year. Because while all other sports right now are happening in spite of the pandemic, this one is taking place because of it.

The way boxing works these days, great fights do not happen. The sport is structured to thwart maximum entertainment. Either the bigger fighter has too much to lose, or the promoters hate each other, or the money isn’t right (and for someone, the money is always wrong).

We waited so long for Pacquiao-Mayweather to happen – years past either man’s prime – that when it did come off, the only impression left was a depressing reminder of what might have been.

You could run down a long list of modern boxers who should be on Wheaties boxes, but aren’t because they never found the will or a way to fight the right people at the right time.

By those rules, Lomachenko-Lopez should not be happening.

Lomachenko doesn’t need to take this risk. He has his belts. He can book safe fights forever, pocket a few million each time, and know that his place on the pound-for-pound rankings won’t suffer. Losing to Lopez torpedoes his ‘best ever’ ambitions.

Ditto Lopez. He is too new in his career for this gamble. A wiser businessman would coast for a few years on ambient buzz and pick off the Lomachenkos of the world when they are nearer the end. A loss now puts Lopez LLC at risk of bankruptcy.

The money was, of course, a problem. It became a bigger problem when COVID-19 eliminated paying audiences. Both fighters took pay cuts.

Pay-per-view was an issue. So they agreed to stage the fight on ESPN. It will be broadcast in Canada on TSN (10 p.m. Eastern Time). When was the last time you got the fight of the year on cable?

And personalities are a big problem. These two guys hate each other’s guts.

In the final press conference – a weird, physically-distanced affair, the two men in street clothes and easy chairs – Lopez was asked about something he’d once said, that he “looked through” Lomachenko.

Lopez puffed up instinctively. He looked over Lomachenko and said, “We gonna do this right now?”

Lomachenko’s English isn’t the greatest. He glanced off-stage and asked a translator what Lopez had just said.

His reaction was a marvel of barely suppressed rage – head lowering, eyes narrowing, mouth widening. Lopez was unmanned by that stare. For the entirety of his dissembling answer, he couldn’t lock eyes with Lomachenko. “Through him,” indeed.

Because he’s the lesser known and the challenger, Lopez started this bad blood. The origin story of this feud sounds so silly, it has to be true. According to Lopez’s father (who is also his trainer), Lomachenko snubbed him years ago as they passed each other in a hotel lobby.

How a fighter of world renown can be expected to know every trainer of every colleague out there, and to treat all of them with exquisite graciousness in spite of the fact that his alarm didn’t go off and now he’s late for lunch, I’m not sure. But if that gets us from there to here, I’m cool with it.

Lopez has taken this thin narrative gruel and made a tasting menu out of it. Apparently, the Handshake That Never Was absorbs his thoughts from sun up to sundown.

In recent days (bad sign?), Lopez has backed away ever so slightly from the importance of The Snub, but in a way that suggests he is in on the con.

“[My father] made this bigger than it needs to be,” Lopez said. “I think everyone needs to congratulate him on that part.”

Yes, do that. In his thin-skinnedness, your father has done all fight fans an enormous favour.

Before it’s been played, it’s impossible to say if any sporting event will rise to the level of a classic.

But this fight can guarantee one thing – at the end of it, someone of enormous talent and ambition will have comprehensively lost. Lost their dignity, their legacy, their place at the top of the food chain.

You won’t get that return from Week 6 action in the NFL. 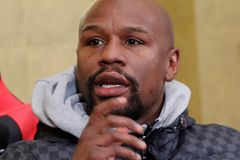 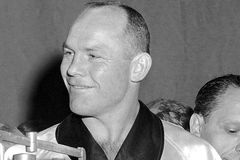