At halftime of Sunday’s Buffalo-New England NFL game, they married a couple at the 50-yard line.

The pair entered a contest billed as the “wedding of a lifetime.” They – and I’m using this word advisedly – won.

It was incredibly tacky, bizarrely touching and a journo sitting a few seats down from us in the press box yelled, “I am NOT crying” when she was.

Even a few weeks ago, asking someone to marry you at a Bills game would be the sports metaphoric equivalent of suggesting, say, the morgue. Or a slaughterhouse.

But things are better these days. Now it’s just reasonable legal grounds for your future divorce.

Because the Bills are suddenly amazing.

They did lose on Sunday. But this was Tom Brady and it was close. Buffalo even had the second-half momentum until its new cult hero, quarterback Josh Allen, had his bell cracked at midfield. His backup was (checking the stats line) terrible. It ended 16-10.

So, if not amazing, not bad. Perfectly acceptable against what has been and still might be the greatest NFL outfit in history.

The Bills are 3-1 on the season, and it was the one loss, rather than any of the wins, that may have convinced you they are for real.

“We have to get back to work. Try to do a lot better than that,” Brady said afterward, sounding relieved. Nearly grateful.

For a long time now, even if you know nothing about football and have never watched the NFL, you have known the Bills are the worst. For one generation, they are visual shorthand for the choke. For the next, they represent a special kind of sports hopelessness that is beyond losing. The Bills represent total surrender.

They haven’t won a playoff game for as long as you are alive.

That may or may not be true. I don’t know you. But it sure feels true, doesn’t it?

How little have the Bills mattered lately? They still have O.J. Simpson’s name up on their Wall of Fame and no one has bothered to boycott them.

How bad has it been to be a Buffalo Bill at any point during the past two decades? One of Bills’ head coaches quit to take a job as an offensive-line coach. In Jacksonville, Fla.

Have you been to Jacksonville? Then you know what I’m saying.

In the weird way of these things, the worse the Bills got, the more committed their fans became.

Canada has its role in this. You’re very welcome.

In the 1990s, when things were rolling, Ontario was home to every Johnny-come-lately, front-running Bills fan on Earth. Just about every single one of them began abandoning the team 10 seconds after the ball went wide right. Most have spent the intervening years pretending the nineties didn’t happen.

A few years later, as the team foundered, Toronto began wooing the team. It invited the Bills up for a visit every year. Although every one of those visits was an unmitigated disaster, it started flirting with the idea of making that arrangement permanent.

When it came out that Jon Bon Jovi was the prime mover behind the incipient Toronto bid for the team, that concentrated minds.

Because it would be one thing to lose your NFL team. It would be quite another to lose it to a man who thinks a 50-year-old can wear leather chaps.

Toronto did Buffalo the favour of reminding everyone what it had.

Now that it’s (relative) boom times in B-Town, the energy around the field feels a little different. Just as hyped up, but with less of a Mad Max meets Leaving Las Vegas vibe than it had in the past.

At 10 a.m. on Sunday, the parking lot was already boozier than Fleet Week, but it was a fun drunk. Lots of kids and families.

The aspiration of the fancy dress is all-world. It’s funny how the more macho the sport, the more camp it is as well. Something about safe spaces, one supposes.

The team took longer than the crowd to settle. New England went up 13-0 early. The Pats were a few feet from making it 20-zip. But then the tide shifted.

Brady has won more games in Buffalo over the past 18 years than any Bills quarterback. Let that one wash over you. Buffalo has for a long time.

But, by Brady’s standard, he was fully contained on Sunday. The Buffalo defence was stiff. The offence was varied and occasionally efficient. No one did anything incredibly stupid.

Buffalo looked like a team that, were you to see it in the postseason, you’d think, “I’d prefer not to play against it.”

The Bills haven’t won a playoff game since Bill Clinton was U.S. president. Think about how long ago that feels. So this is a change. It’s fun to see all that civic pining finally rewarded with competence.

An hour after the game ended, the couple who’d married were back on the field. The groom was throwing the bride passes into the end zone (she remained in a wedding gown and heels; he was doing her no favours with leading passes; she caught more than a few).

And you know how you know the Bills are good again?

Everyone sat there grinning goofily as they watched them, and not one person thought to make a joke about signing them up. 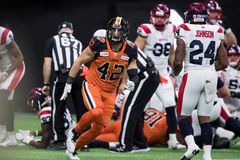 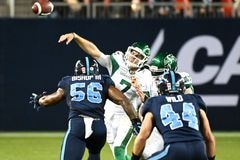 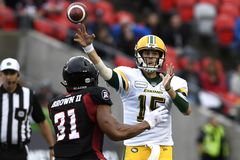