Calgary Cavalry is the first Canadian Premier League club through to the third round of the Canadian championship with a 2-1 win Tuesday over Hamilton Forge.

Calgary won the two-leg series on aggregate. Calgary and Hamilton tied 1-1 in the first leg June 4.

Cavalry FC meets Major League Soccer’s Vancouver Whitecaps in the next round of the domestic tournament to determine Canada’s representative in the CONCACAF Champions League.

The Canadian championship is the highest domestic competition for clubs vying to play in the Champions League and potentially the FIFA Club World Cup.

The arrival of the seven-team Canadian Premier League this year swelled the number of teams competing for the Voyageurs Cup from six in 2018 to 13.

With five different leagues represented, it’s a similar dynamic on a smaller scale to England’s FA Cup that runs the gamut from Premier League giants to nonleague minnows with the odd newsworthy upset.

Defending champion and 2018 MLS champion Toronto FC received a bye to this year’s semi-final round, while the Whitecaps and Montreal Impact and USL’s Ottawa Fury got byes to the third round.

Calgary will host the Whitecaps in the first leg July 10 at Spruce Meadows before travelling to Vancouver for the second match July 24.

“It’s just a soccer game in the end, right? It’s 90 minutes, they have two legs, two feet just like us.”

Other second-round winners will emerge Wednesday from CPL matchups.

Winnipeg Valour is up 2-1 at home to Halifax Wanderers, while York 9 leads 3-1 heading into an away match with Edmonton FC.

The winner between York 9 and Edmonton on Wednesday faces Montreal, while the Winnipeg-Halifax victor advances to meet Ottawa in the next round.

Each two-legged round is settled by aggregate score. If tied, away goals decide the winner and if still deadlocked, the second game goes to penalty kicks.

Cavalry downed Victoria’s Pacific FC in the first round.

The two-match championship is Sept. 18 and 25th.

Sergio Camargo pushed Calgary ahead 2-1 in the 51st minute Tuesday at Spruce Meadows.

Camargo finished a feed from Nico Pasquotti, redirecting the ball between Forge keeper Triston Henry and his left post.

Dominique Malonga drew the hosts even with a header in the 41st minute.

“That might have gotten to us a little bit in the first 20 minutes, maybe the occasion and knowing what lies on the other side of this game if we got through,” Trafford said.

“We took our foot off the pedal and let Calgary back in the game,” Bekker said. “Calgary has been brilliant all season.”

The conclusion of Tuesday’s match in Calgary wasn’t as dramatic as the first-leg fireworks in Hamilton.

His team up 1-0 on an Emery Welshman goal, Forge keeper Quillan Roberts was shown a red card in extra time for tripping Malonga.

Hamilton had no more substitutions. Midfielder Alexander Achinioti-Joensson was tasked with stopping Malonga’s penalty shot, which he didn’t in the final minute.

Pushing and shoving erupted at the whistle. Cavalry players alleged they heard racist comments from the other side.

While the CPL said it would investigate, both clubs face possible disciplinary action from Canada Soccer for failing “to ensure their players and/or officials conducted themselves in an orderly fashion.”

Potential sanctions include fines, point deductions and disqualification from the competition.

Canada Soccer also said Cavalry forward Jordan Brown and Forge forward Tristan Borges would face a disciplinary committee to answer for their conduct in that confrontation.

With Roberts serving the first of his two-match suspension Tuesday for the red card, Henry drew into Hamilton’s goal Tuesday. 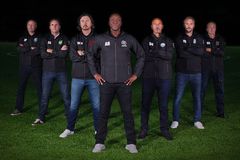