Rocked by the deaths of six horses last week, the Calgary Stampede has agreed to a fresh assessment of the safety of chuckwagon racing.

Warren Connell, the Stampede’s chief executive officer, said Tuesday that the organization examines each of its rodeo disciplines each year, but on this occasion chuckwagons will be more heavily scrutinized.

“The biggest difference is that we are undertaking a thorough review of everything,” Connell said. “We are going to look at all of the practices associated with the Rangeland Derby.

“We don’t have any preconceived notions of what the outcome will be. We are open to absolutely everything that comes out of it.”

Three chuckwagon horses were euthanized after they sustained injuries during Sunday night’s final round of the Rangeland Derby. Two were put down after being hurt during preliminary events earlier in the week and one died from a heart attack. A handful more were injured.

“Our whole organization is pretty much deeply saddened,” Connell said.

The sport has long been opposed by animal-rights groups that believe it too dangerous. Stampede officials made modifications to the track following an incident in 2007 in which three horses died and a driver was hospitalized. Four died in 2009, six in 2010 and four were euthanized in 2015 after suffering leg injuries.

Races are contested with chuckwagon teams of drivers and horses completing a figure eight around two barrels and then dashing in close quarters down a half-mile track. The sport’s history can be traced back to the Stampede in 1923. Each race typically involves three or four teams, and begins with outriders tossing two tent poles and a barrel representing a camp stove into the back of each wagon.

There are two major racing circuits with events mostly in Alberta and Saskatchewan. The prize money offered for chuckwagon racing at the Stampede this year was $1.45-million, by far the most in the sport. The Rangeland Derby is staged over nine days and draws sellout crowds of 20,000 people each night.

Connell called the chuckwagon races “part of the fabric” of the Stampede, but said it “clearly needs a review” after the deaths of six horses.

“Like with every sport, we have people who support it and others that don’t,” he said. “The Stampede is committed deeply to the safety of the animals and it is embedded in the culture of our organization.

“We try to control the variables to the best of our ability, but despite our best efforts there is an element of unpredictability and injuries can occur.

The Stampede’s Chuckwagon Safety Commission, formed 12 years ago, took the step of disqualifying a driver from the Rangeland Derby for the first time in history last week as the result of a safety infraction during Thursday’s races.

Chad Harden was also fined $10,000 for causing an accident that race judges and the safety commission deemed avoidable. Officials found that Harden impeded a wagon driven by Danny Ringuette, which in turn caused it to collide with a team of horses driven by Evan Salmond. One of Salmond’s horses died and three were injured.

Harden was also ordered to pay $10,000 to Salmond for the cost of the horse that died. Harden is currently banned from competing again at the Stampede, although there is possibly a route for him to be reinstated.

Salmond, a 38-year-old from Hudson Bay, Sask., also had three horses die as a result of Sunday night’s incident. According to a news release issued by the Stampede, his right lead horse sustained a fractured left hind cannon bone while running. As a result of that, two other horses on the team sustained injuries. Veterinarians examined all three immediately on the track and found there was no option for treatment.

Salmond, who has raced for six years within the World Professional Chuckwagon Association, declined to be interviewed for this story. He said he was deeply grieving the deaths of all four horses.

The Calgary Police Service said any investigation into animal cruelty would have to show criminal intent and thus did not consider pursuing charges in any of the horses’ deaths.

In an e-mail, Brad Nichols, the senior manager in charge of animal cruelty investigations for the Calgary Humane Society, said each death was assessed on a case-by-case basis.

He found that the incident involving Harden warranted a preliminary investigation because it was caused by driver interference. After consulting with the Crown Prosecutor, however, he said it was decided not to pursue charges because even the provoked incident likely did not contravene Alberta’s Animal Protection Act.

Ed Wittchen, the president of the Alberta-based World Professional Chuckwagon Association, said consultation has already begun between his organization and Stampede officials.

“I am sure that Calgary will be sitting down with us to discuss if there are things we could prevent,” Wittchen said.

Dennis Ringuette, the head of the Canadian Professional Chuckwagon Association, likewise expects to participate in a safety review. The drivers for the Rangeland Derby are drawn from both circuits. There are fewer than 100 chuckwagon drivers in Canada.

“Perhaps there are a few things that can be done,” Ringuette, who is based in Saskatchewan, said. “We always welcome the discussion.”

Five minutes to showtime at the Calgary Stampede
July 12, 2019 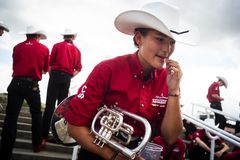