The Canadian Press
Published October 7, 2019 Updated October 7, 2019
For Subscribers
Comments
Please log in to listen to this story. Also available in French and Mandarin. Log In Create Free Account

Former Canada captain Gareth Rees can’t escape the memory of getting sent off at the 1995 Rugby World Cup.

People often bring up the volcanic 20-0 loss to host South Africa in the so-called Battle of Boet Erasmus, named after the stadium in Port Elizabeth where the fight-filled game took place.

Plus, Irish referee David McHugh, who also ejected Canadian prop Rod Snow and Springboks hooker James Dalton, gave Rees the red card he brandished after the game’s infamous second-half brawl. The card, framed in a picture of Rees and Snow with a note from McHugh, is on display in Rees’s home.

“It’s funny, for all the rugby I played, it’s the one [game] most people know me for or remember,” said Rees, currently serving as media manager for the Canadian team at the Rugby World Cup in Japan.

“I’m not proud of being sent off but I don’t regret my actions. ... I was the captain and that [Canadian] group was very much one in, all in,” he added.

The Canadian men, ranked 22nd in the world, face No. 5 South Africa on Tuesday in Kobe in just the third-ever meeting between the two countries (the visiting Canadians lost 51-18 when the two played in East London in June, 2000).

It was a historic time.

Rugby was on the cusp of going professional. And South Africa was transforming under Nelson Mandela. As captured in the film Invictus, Mandela found a way to use the Springboks’ World Cup campaign as a unifying force in a country that had been pulled apart by apartheid.

The Canadians were well aware that the spotlight was on the tournament.

“We were really juiced to play South Africa – in South Africa, in a World Cup, with the political climate as it was. Everything was on the line in this game,” said forward Al Charron, like Rees a member of the World Rugby Hall of Fame.

There was drama from the get-go as the stadium floodlights failed seconds before kickoff. With the stadium dark, the teams returned to the dressing rooms. The game eventually got under way 45 minutes late.

Knowing its lineout would not stand up to the Springboks, Canada elected not to kick for territory and kept the ball in hand. The bad blood surfaced early.

Charron calls it “probably the dirtiest, hardest game I was ever in.”

Canadian fullback Scott Stewart was taken out in the air twice.

“We were a proud team, proud players,” said winger Dave Lougheed. “We weren’t going to give up anything to the South Africans. And that’s the way we played.”

Neither team backed off an inch.

“Had it just been a clean rugby game, I think South Africa is the easy winner on the day,” Snow said. “But for whatever reason – I think it has a lot to do with the kind of South African rugby mentality – they thought ‘Well winning the game is not enough. We want to bully the guys and beat them up as well.’

“And I think that played into our hands because we knew we couldn’t keep with them on the skill level. But if turned into a wrestling match, we had a good chance. And that’s basically what happened. We more than held our own from that perspective.”

Video highlights do not do the game justice, according to Charron.

“There was stuff going on in that game that the referee wasn’t dealing with properly,” he said. “Then we started taking things into our hands, sort of.”

“It was pre-digital so there weren’t 42 camera angles,” Lougheed said.

Under pressure in the scrum, Canada trailed 17-0 at the half after conceding a penalty and two pushover tries. A Joel Stransky penalty made it 20-0 early in the second half.

And then the fun began.

A flowing Canadian attack sent the ball wide to the right. Centre Christian Stewart passed to winger Winston Stanley, who lost the ball at the sideline, only to be hit out of bounds by Pieter Hendriks.

Then two tussled, grabbing fistfuls of each other’s jersey at the advertising hoarding. Then Stewart raced in like a guided missile, barrelling into Hendriks – which in turn prompted Dalton to enter the fray.

After spotting Stewart getting pulled out by two Springboks and getting sucker-punched from behind, Rees launched himself into the fray.

“I’m not known for my fighting skills,” Rees said with a laugh.

Charron remembers Rees swinging and missing, falling to the ground with several Springboks advancing on him. Looking to protect his teammate while not instigating matters, Charron jumped on top of him.

Snow ran into the ball of players was grabbed from behind by giant South African lock Hannes Strydom. Remembering his wrestling background, Snow managed to roll over the big man.

“At that stage, you feel like you’re fighting for your life,” Snow said.

Strydom was left bleeding above the eye.

When order was restored, McHugh consulted with his touch judges.

“Of the 30 guys on the field, he probably could have picked 18 to 20 guys to send off,” said Charron. “How he ended up picking Dalton, Gareth and Rod, I don’t know.”

The three ejections were a record in a rugby test match.

Charron and some of his teammates were unhappy at the way the game was covered in the media, with British newspapers referencing Canada’s hockey mentality.

“It takes two to tango and I think we were the ones who were asked to the dance. And we eventually accepted,” Charron said with a wry laugh.

Charron also believes the game was closer than the score would indicate. Needing points, the Canadian passed up on several penalty kicks to go for tries.

Ironically, Port Elizabeth had opened its arms to the Canadian team, which played all three of its pool games there. The Canadians had raised funds for local townships and forged friendships.

After the South Africa game, the Canadians ran around the field with a banner thanking Port Elizabeth for its hospitality.

Both Hendriks and Dalton were subsequently banned from the tournament, which allowed winger Chester Williams, a black sporting icon in the country, back into the Bok squad after initially missing selection due to injury.

Rees and Snow were suspended for 30 days and Stewart 60 days for their part in the brawl, but their tournament was already over.

Snow remained in South Africa after the tournament to play for Eastern Province in the Currie Cup. He says such rugby flashpoints were common there.

“It was the Wild West,” he said. “The game is played differently down there. So it might have been something new for the rest of the world in the sport of rugby to see, but the South Africans would have seen lots of that.”

In fact, the same stadium had been the scene of an infamous game between the British Lions and Springboks a decade before.

In 1974, the British Lions claimed their first series victory against the Springboks in 78 years by winning the no-holds-barred third test of the four-match series 26-9 in Port Elizabeth.

Famously one punch resulted in South African Johan de Bruyn’s glass eye flying out, causing a delay as players searched the mud to find it. After it was located, de Bruyn replaced it and kept playing. 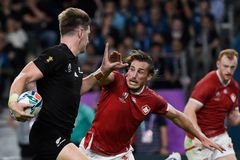 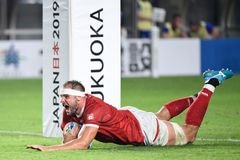