The last time Ben LeSage played for Canada, he broke his hand. And kept playing.

It happened four minutes into Canada’s opening match at the 2019 Rugby World Cup, a 48-7 loss to Italy on Sept. 26 in Fukuoka City. He tackled an Italian, whose knee landed on his hand as he went down.

“I knew right away that something was wrong with my hand but, as you do, you just get back into the play and wait for the next stoppage,” the Toronto Arrows centre said.

That came at the eight-minute mark when Italy scored its first try of the game, allowing LeSage to try and flag down a physio for some attention.

“The physio just sprinted straight past me to Nick Blevins who 30 seconds beforehand had gone head-on-head and broken his jaw. He was standing there holding his jaw. So all the attention went to Blevins, and understandably so, to be honest,” LeSage said.

Blevins was replaced by Ciaran Hearn. LeSage, knowing the substitute back options on the bench has been thinned, gritted his teeth and kept going.

“I could tell it was broken [and] if this is was going to be my only World Cup game, then I might as well try and get 80 minutes out of it,” he said. “So I just got it taped up a bit more at halftime, took the painkiller and just tried to embrace the moment.”

He later found out he had broken the third metacarpal bone in his right hand.

The 25-year-old LeSage pulls on the Maple Leaf jersey again Saturday when the 23rd-ranked Canadian men take on sixth-ranked Wales at Principality Stadium in Cardiff. (The game will be shown on DAZN beginning at 10 a.m. Eastern Time). Canada faces No. 3 England at Twickenham on July 10.

“What a challenge to have to get up for. [I’m] really excited about it,” LeSage said of facing such elite opposition in Canada’s first games since the World Cup.

Rumball will captain Canada with LeSage serving as vice-captain.

While Wales has lost 10 players to the British and Irish Lions tour of South Africa, coach Wayne Pivac is fielding a lineup that includes veterans Jonathan Davies (88 caps) and Leigh Halfpenny (95). Pivac has named two uncapped starters with three more on the bench.

“I don’t expect anyone from our team expects to be going out for a training run or anything like that,” LeSage said.

“You either go into your shell or really embrace that challenge and understand the opportunity in front of you,” he added.

Canada’s starting 15 on Saturday includes the uncapped Braude, Vikilani, Quinn Ngawati and Cooper Coats, with Rowland, Donald Carson and Michael Smith set to make their debut off the bench.

Saturday’s attendance will be limited to 8,200 at the Principality Stadium.

After the Italy game at the World Cup, LeSage flew back to Vancouver to undergo surgery. After getting three screws put in to align the bones, he flew back to Japan to join friends and family who were taking in the tournament.

“I figured rather than sit on the couch at home watching, I might as well go rejoin then,” he said.

It proved to to be an emotional roller-coaster for the Calgary-born LeSage, who missed out on facing the All Blacks and eventual world champion South Africa.

“It goes without saying that professional sports can be quite cruel sometimes, and rugby particularly so,” he said. “I probably felt sorry for myself a little bit there, for sure, and was a bit down after the [Italy] game. But [I] kind of understood I’d be back and hopefully there’s more World Cups in my future and it is what it is.

“I really made the best of it and, to be honest, the travel afterwards was one of the best travel experiences I’ve ever hard,” added LeSage, who spent time in Asia with a few Canadian teammates after the tournament.

LeSage, who has won 16 caps for Canada since making his debut in November, 2016, still has the screws in his hand.

The six-foot 215-pounder holds a degree in mechatronics engineering — a subset of mechanical engineering that focuses on robotics — with a minor in commerce from the University of British Columbia where his international rugby career took off.

LeSage represented Canada at the under-18 and under-20 level, but rugby was put on hold for a year when he suffered a torn anterior cruciate ligament in his knee while living and playing in New Zealand after his first year at UBC.

Living in New Zealand was another life experience. He shared a home with fellow Canadian rugby players Matt Mullins and Djustice Sears-Duru. LeSage and Sears-Duru, who is set to earn his 53rd Canada cap Saturday, worked on a dairy farm when not playing rugby.

Away from rugby, he works for a British company named Omnipresent that specializes in helping businesses with human resources around the globe. Being a part-time engineer isn’t really viable, he said.

LeSage and the Arrows have called Marietta, Ga., home since mid-March with the Toronto squad opting to share facilities with Rugby ATL this season owing to pandemic-related travel restrictions.

Despite “a few gashes to the face and stitches,” LeSage has been ever-present in the Arrows’ lineup this season. He split open his forehead in the first game of the season, prompting him to wear protective headgear. The first game he took that off he caught an elbow that opened another gash below his right eyebrow.

He reckons he had 22 stitches to repair the cuts.

“That’s the running joke internally that I’m near the top of the league in stitches this year,” he said. 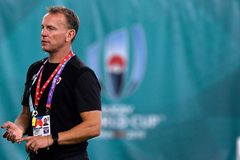 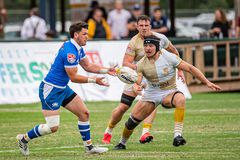 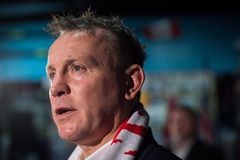