Vanessa Borovilos started hitting golf balls when she was 3, but quickly outgrew the backyard at her family’s Toronto home.

“When I started hitting them over the net and right up to the fence, my dad started taking me out to a nearby driving range,” the 12-year-old says. “I played the mini-putt course there, too, and then we just kept going to bigger places.”

In her brief but meteoric golf career, the Grade 7 student has not only travelled throughout Canada and the United States to play elite-level tournament golf, she’s also reached one of the game’s most hallowed grounds – Augusta National, the private club in Augusta, Ga., that plays host to the first men’s major tournament of the season, the Masters.

Vanessa has competed at Augusta three times in the annual Drive, Chip and Putt, a skills competition for junior golfers aged 7 to 15. She’ll make a record-tying fourth appearance this Sunday (only Americans Treed Huang and Megha Ganne have played as many) and will be trying to win her age division for the second consecutive year. She was the champion in the 10- to 11-year-old category last year.

Not bad for someone who didn’t really understand what she was getting into when she made her first attempt to qualify for Drive, Chip and Putt as an eight-year-old. “My dad just wanted me to try it,” she recalls. “I didn’t know what it actually meant to make it there. I didn’t know what the Masters was.”

Like the tens of thousands of other North American juniors trying to make it to Augusta every year, Vanessa had to pass through three qualifying stages to reach the final field of 80. She booked her spot in the 2019 field by winning her age category at the third and final stage of qualifying last fall at Winged Foot Golf Club in Mamaroneck, N.Y.

Despite all her success and experience at Augusta, she knows she can’t rest on her laurels. So she’s intensified her practising, under the tutelage of instructor Doug Lawrie, to focus especially on the short-game elements of the competition.

“I’ve been practising my landing spots when I’m chipping,” says Vanessa, a self-described intense competitor whose stroke-play success includes winning the U.S. Kids Golf World Championship twice. “On my putting, I’ve been practising just lagging the ball up to the hole. The greens are really fast there so I’m trying to be ready again for that."

Canada’s other four entrants won’t have the luxury of knowing what to expect. Nicole Gal of Oakville, Ont., Anna Jiaxin Huang of Vancouver, Andy Mac of Candiac, Que., and Carter Lavigne of Moncton are all making their first appearances.

Nicole (girls 14- to 15-year-old category), Andy (boys 10-11) and Carter (boys 7-9) also passed through Winged Foot en route to Augusta, while Anna (girls 10-11) gained her berth in a third-stage qualifier at Chambers Bay Golf Course in the state of Washington. They’ll join 75 Americans in the competition that helps launch Masters week.

Augusta National, in conjunction with the United States Golf Association and the PGA of America, started Drive, Chip and Putt five years ago to stimulate interest in golf at the junior level. The event is televised and some of the professionals entered in the Masters join the gallery, along with the competitors’ family members, and hand out prizes.

“It used to be, ‘Oh, it’s just a nice little tournament and they have kids there at Augusta,’ ” Ann Carroll, a Toronto-area teaching professional who has worked with Nicole for about a year and a half, says of Drive, Chip and Putt. “Now, it’s huge. I think it’s so great. Nicole has learned a lot about herself through the process. I think all the kids do.”

Carroll’s initial impression of the event was that it might not identify the best overall golfers because it features three isolated skills. But she changed her mind after watching past editions on TV, concluding the juniors’ composure alone on a big stage shows their mettle.

“These kids are good golfers. … They’ve persevered to get there. In Nicole’s age group, I believe it went from 20,000 [first-stage entrants] to eight [finalists], which is just crazy. You have more chance of winning the lottery.”

Like Vanessa, Carter’s origin in the game included mini-golf. “I remember my first golf experience was when I was 2 and I played the mini-putt course at Crystal Palace [an amusement park that has since closed],” he told golfnb.ca in his home province. “I was scared and I couldn’t play the hole with pirates on it.”

But also like Vanessa, he has come a long way quickly. He started playing regular golf at 4 and beat his father, Darsey, for the first time at 6. “People don’t ask [who beat who] anymore,” Darsey says.

For Nicole, 14, her challenge is to manage the excitement of being at the site where her golfing hero and 2015 Masters champion Jordan Spieth, among others, have made golf history. Even an accomplished golfer with victories at significant tournaments, including the Canadian Junior Golf Association World Junior Challenge in Florida in 2016, understands the stakes.

“I will be more nervous and excited for Augusta because, one, it is at Augusta and, two, it’s on TV,” she says, speaking from Florida, where she goes in the Canadian winters occasionally to train. “And some pros will probably be there. It’s Augusta. It’s going to be so cool.”

But she remains undaunted and says she can lean on a couple of her secret weapons – her driving consistency (the competition measures both accuracy and distance) and her good-luck charm, a yellow ring she wears while competing. The silicon ring stencilled with the infinity symbol is a progression from the yellow nail polish she wore on a whim last year in winning the Winged Foot qualifier and shooting a then-best 75 in a different competition.

Regardless of the outcome, she’ll be living a dream she’s had for many years, perhaps a common one for the other 79 Drive, Chip and Putt entrants.

“I’ve always wanted to go and watch the pros at the Masters,” Nicole says. “My grandparents get tickets every year because they won the lottery. [Augusta National rations the supply of Masters tickets partly through a lottery.] I thought maybe for this year they would give them to me for Christmas or something. But then I did end up qualifying [for Drive, Chip and Putt]. Now I can compete there. Even better.” 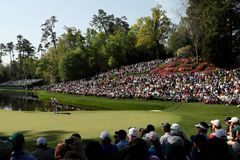 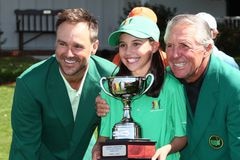