But first the 23-year-old from White Rock, B.C., is focusing on his rugby education. And Smith is learning from the best at the San Diego Legion alongside the likes of former England captain Chris Robshaw, a fellow flanker.

Smith is still pinching himself.

“Getting an opportunity to learn from someone like that is incredible,” he said of Robshaw, who is coming back from a dislocated shoulder suffered in his MLR debut in April.

“Just having him as a resource to watch film with, ask questions, be friends with as well being able to chat with him about life beyond rugby and what it’s like to be a pro and an international player,” he added. “There’s so much you can learn from someone off the field as well. He’s certainly a big part of that, too.”

The 35-year-old Robshaw won 66 caps for England, captaining the side 43 times. But he isn’t the only big name wearing San Diego colours.

“I grew up going to the Vancouver Sevens tournament and seeing [South African speedster] Cecil Afrika on the World Sevens Series,” Smith said. “And then before you know it, he’s my roommate on a trip and we’re hanging out together.”

The 33-year-old Afrika was named World Rugby’s World Sevens Player of the Year in 2011, won a bronze medal at the 2016 Olympics in Rio and retired from international sevens as South Africa’s all time leading World Series scorer in June, 2020.

For Smith, whose previous international experience was representing Canada at the second-tier World Rugby Under 20 Trophy in 2018 in Romania, it’s a unique opportunity to listen, watch and learn.

Smith and the Legion play the Toronto Arrows in a battle of 4-6-0 teams Sunday in Marietta, Ga. Toronto has been sharing Rugby ATL’s training facilities and stadium during the pandemic.

“I’ve played with and against a lot of those guys, for a while now,” Smith, who attended Canada’s high-performance camp in November, said of the Arrows.

He will see more of them in the future. Smith and 13 members of the Arrows are on Canada coach Kingsley Jones’ extended 40-man roster for July and fall test matches.

Other Canadians on the Legion roster include fellow backrower Travis Larsen, whose brother Josh captains the New England Free Jacks, and centre Josh Thiel, whose parents both played for Canada and whose twin brother Jake has represented Canada in sevens.

Toronto was beaten 14-12 last time out at New England and has lost three of its past four. San Diego has won its past two, including a 39-11 victory over the Houston SaberCats last weekend.

The Legion started the season in Las Vegas owing to pandemic-related restrictions in California, but have been able to move back home. They play just south of the city at the Chula Vista Elite Athlete Training Center.

“It’s pretty nice to finish training in the evening and go straight to the beach and catch some waves,” Smith said. “It’s not bad.”

The 6-foot-2, 220-pounder played rugby at University of British Columbia, helping the Thunderbirds to the national championship in 2017 and ’18. He was named captain in 2019 and, in April, 2020, earned the Bobby Gaul Memorial Award as UBC’s outstanding graduating male athlete of the year.

With the 2020 university season shut down owing to the pandemic, he started training last September at the Rugby Canada National Development Academy in Langford, B.C. That earned him an invitation to Canada’s high-performance camp in November.

Jamie Cudmore, the former Canadian star forward who now oversees the academy, knows Legion co-head coach Scott Murray. After watching film of Smith, the MLR team offered him a contract. While Smith signed in late December, he missed the start of the season because his visa didn’t arrive until late March.

Once the red tape was sorted and he had secured the required negative COVID-19 test, he was on a plane to the U.S.

He made his debut off the bench April 24 in the dying minutes of a 45-17 loss to the L.A. Giltinis at Los Angeles Memorial Coliseum. There was another appearance as a replacement against New England before Smith made his first start May 9 against the Seattle Seawolves, with subsequent starts against NOLA Gold and Houston.

“I’m glad I’ve gotten the game time to show I can have a consistent performance. But at the end of the day we have good players coming back in, like Chris Robshaw will likely be back in soon from his injury. And I need to keep up those performances if I wanted a spot on the starting roster or on the bench.

“That’s one of the reasons why I love this league too, is you’re always competing for those spots. And that makes you a better player on and off the field.”

Smith started off playing hockey but was introduced to rugby by Adam Roberts, head coach at Earl Marriott Secondary in Surrey, B.C. That led to playing representative rugby at the youth level, first for B.C. and then Canada.

Having earned a bachelor of science in pharmacology, he has been accepted into UBC’s med school. He plans to start the program this fall on the university’s satellite campus on Vancouver Island so he can continue training with Rugby Canada’s academy.

He says he is in discussions with the Legion coaching staff about his future with the team and hopes that he can combine rugby with his schooling. The club has been very supportive, says Smith, who cites the Kansas City Chiefs’ Canadian lineman Laurent Duvernay-Tardif as a role model.

Tardif balanced football and med school, sitting out the 2020 NFL season to work at a long-term care facility in Quebec

“It’ll take some sacrifices and it’ll be a lot of hard work. It’s definitely no the easiest route to do,” Smith said. “But ultimately I choose both and I want to make it work the best I can.”

His family has sports ties that go back a ways with UBC. His father played volleyball there and Michael’s younger sister, Rachel, and cousin Halle Smith currently play rugby there. 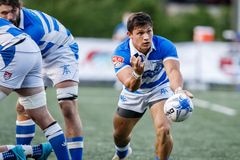 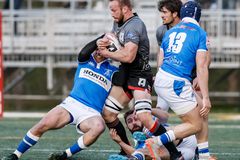