Thinking she had won all three rounds Thursday night, Canada’s Myriam Da Silva had an air of triumph as she raised her right hand high in the air after fighting American Oshae Jones.

Da Silva’s coaches also looked confident as they awaited the decision. The knowledgeable crowd at the Miguel Grau Coliseum had been won over too, with spectators even chanting “Ca-Na-Da” late in the bout.

Jones swept the scorecards for the victory in the women’s 69-kilogram final in a decision that surprised most in attendance at the 2,400-seat venue.

“They saw that I gave everything and I did my best in that ring,” Da Silva said. “I left my heart there.”

Emphatic boos and whistles filled the venue when the announcement was made.

Jones egged on the crowd with some emphatic dancing in the ring — even ‘flossing’ at one point — before doing what she called the ‘stanky leg’ move as she walked down the steps.

The crowd was having none of it.

“I was very shocked,” Jones said. “That’s the first time I ever got booed in my career.”

Four judges scored the fight 30-27 for the American while the other gave her a 29-28 edge.

“Right now it’s bittersweet,” Da Silva said. “But I think I delivered the best performance that I can give. That’s the most important thing.

“For me right now, I gave it my all in the ring. I did my best and I have no regrets.”

The crowd roared as the Canadian walked back to the locker-room. She acknowledged the support with a wave and took a few pictures with fans.

Afterwards, the 35-year-old from Chambly, Que., took the high road when asked about her opponent’s unusual celebration.

“I don’t really have an opinion on that,” she said. “Everyone has their own reaction to a victory.”

The final fight on a seven-bout evening program, Da Silva looked focused and loose as she walked out to “Radioactive” by Imagine Dragons.

The three-time national champion used an effective right jab early and kept her distance from her opponent’s solid left hook.

Da Silva counterpunched nicely and wouldn’t bite on the American’s feints. Jones, a southpaw, often worked the midsection in a round where both fighters seemed to feel the other out.

The Canadian used combinations early in the second round and started to find holes. Jones was forced to her heels and many attempts forward were rebuffed.

Da Silva was on the offensive in the final round. She mixed in more hooks with her jabs and delivered a late flurry of punches to Jones’s head in the dying seconds, capping the effort with a thundering roundhouse right.

“Myriam offered a great performance tonight,” said coach Joao Carlos Barros. “She followed the gameplan and landed clean punches. She did much better than in their previous faceoff (a Jones win last April) and as coaches, we believe she did everything to win tonight’s bout.”

Jones grimaced when the final bell sounded and jogged back to her corner. She felt the opening round could have been scored either way but that she won the fight from there.

“I adjusted to her in the second and third round,” Jones said. “I think I got it good.”

She was elated with the decision and it wasn’t long before the celebration was on.

“I was excited and ecstatic that I had won,” she said. “I feel like if I feel good, I want to make everybody else around me feel good. So I try to put on a little show every time.”

Boxing’s seven-day run in Lima will conclude Friday. Results do not have an impact on the qualification process for next year’s Tokyo Olympics. 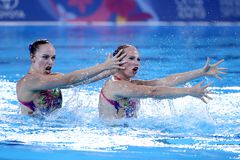 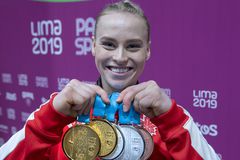 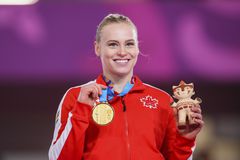