John Moonlight, a rugby icon who led Canada to some of its greatest sevens triumphs, is retiring to become a firefighter in his native Pickering, Ont.

The 30-year-old Moonlight leaves as Canada’s all-time caps leader in sevens. He played in 65 World Series events, scoring his 116th career try in Hong Kong prior to representing Canada earlier this month at the Commonwealth Games in Australia.

“I’m excited,” Moonlight said in an interview. “I’m so privileged in the fact that I had an unreal rugby career. I travelled the world representing Canada for so many occasions. And I get to switch from that career right into probably one of the next best careers that you could have — in my hometown — and finally be able to give back to the community.”

Moonlight starts his new career May 7, kicking off a seven-week training period before joining the regular rotation.

“As much as I love rugby and I love wearing that (Canada) jersey, I have to focus on preparing myself for the rest of my life and setting myself up,” he said.

Devoting himself to a sport well down the Canadian pecking order, Moonlight may be better known outside of our borders despite a gritty hard-nosed playing style that embodies the Maple Leaf.

“World rugby will lose one of its great warriors,” Canada coach Damian McGrath, an English native, said by email from Singapore where Canada is preparing to defend its lone World Series title.

“In my almost 30 years of professional coaching he stands among a small group of players I’ve come across I would call ‘greats’ ... He epitomizes Canadian rugby,” McGrath added. “He is driven, he has true grit and has made the best of his talent. I wouldn’t say he’s the best at any one thing but he’s the best at putting everything together.”

A longtime captain and co-captain of the sevens squad, Moonlight is a physical specimen with a seemingly bottomless gas tank. Whether he had the ball in hand or was hunting down an opponent who had it, the six-foot-one, 226-pound Moonlight left a mark.

But what set Moonlight apart was his toughness and work ethic.

“He would do anything for the team,” said former sevens teammate Sean Duke, who scored 124 tries for Canada. “The amount that guy works is insane. And he’s always been that way.

“He’s one of the toughest players I’ve ever played with. Probably the toughest. He will put his head anywhere. He’s not afraid of anything.”

Duke noted how Moonlight would always be the one sprinting towards an opposition try-scorer, busting a gut to deny an easy conversion from under the posts.

Moonlight played in a Canadian-record 318 matches on the World Series, 14th on the all-time list, and scored 580 points.

Moonlight was the longtime Canadian skipper but shared the captaincy recently with Nate Hirayama and Harry Jones after missing time with the team to take a firefighting course in Texas.

“John’s a phenomenal person, first and foremost,” Middleton, a native of Zimbabwe who has coached around the world, said in 2015. “He’s one of the most exceptional people I’ve met in my rugby career. Fantastic leader, a guy of high great integrity. Huge work rate.”

After becoming a carded athlete, Moonlight honed his body in the weight room. Watching him run, it was hard not to marvel at the muscles in his legs.

Moonlight does not expect to continue playing rugby at club level but hopes to stay involved in the sport, helping young talent develop. And while he has experienced both the highs and lows of Canadian rugby, he is optimistic about the future of the sport here.

“I see there’s some good people, especially in the sevens program, trying to do good things,” Moonlight said. “If we get the (talent) development right, I think Rugby Canada is going to get themselves back on track.”

His next goal is to compete in an Ironman triathlon.

Quiet by nature, Moonlight led by example, according to Duke.

“That’s the best way to do it,” Duke said. “You can’t talk the talk without walking the walk. And he definitely walked the walk.”

Moonlight, who also won 23 caps for the 15s team including three games at the 2015 World Cup, counts the 2017 Singapore win as one of his career highlights.

“(It was) huge for me,” he said. “One of the things I always said in my career was I wanted to lift a cup before I ended (playing).”

He also pointed to the roar that greeted the Canadian team when it ran out in the inaugural Canada Sevens tournament at Vancouver’s B.C. Place Stadium in 2016.

“To be able to represent our country in our country and have so many people cheering for us. That’s one of those moments I’ll never forget. It was so loud in there.”

Moonlight repaid the favour, bulling his way over for the decisive try with no time remaining to complete a 19-17 comeback win over France in the Bowl final.

And he recalled winning the inaugural Pan American Games rugby sevens gold in Guadalajara in 2011 — sharing a post-game celebratory pizza in the stadium next to Hirayama and Duke, whose fresh stitches were still leaking blood.

“One of my favourite memories,” said Moonlight.

In 2015, when Canada won Pan Am gold in Toronto, he was named Canadian men’s sevens player of the year for the fourth straight year.

Moonlight took up the sport in Grade 9 as a back. But after Googling the different positions, he decided the hard-nosed world of a flanker sounded more his style.

He also played hockey, football and volleyball, but started focusing on rugby when Paul Connelly, who taught and coached at Uxbridge Secondary School, told him he was good enough to play for the Canadian under-19 side.

Moonlight made the Ontario team — he had been cut the year before — and earned a spot on the Canadian under-19 squad the next year. His cousin David Moonlight, a former Canadian international and sevens player of the year, also encouraged him.

Moonlight sees similarities between rugby and firefighting in terms of the team approach to both.

“We talk about having trust in each other on the field all the time and trusting that the guy beside you will do his job when you need him to. Well it’s the same thing in firefighting. You’re always working in pairs and you’re always working for the team ... You’re successful together, much like on the (playing) field.” 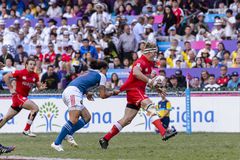 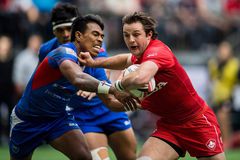 Canada at another rugby crossroads in bid for World Cup berth
February 2, 2018 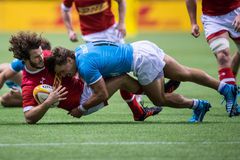