More than a century after it had been created, Diego Maradona invented soccer. Because while others played the game, Mr. Maradona briefly perfected it.

There was not one facet of the sport – technique, dribbling, tactics, instinct, on-field IQ, viciousness, nose for goal – he did not do as well or better than anyone had before or has since.

It was said that during the Argentine’s first practices for Barcelona, one of the biggest clubs in the world, his new teammates would stop what they were doing so they could stand there and watch him.

“We all thought ourselves privileged to be witnesses of his genius,” one of them, Lobo Carrasco, said later.

In his day – and he had more than a few of them – Mr. Maradona could not be touched. Few athletes have had such mastery of their craft. It was everything else in life that Mr. Maradona had a tough time figuring out.

He died Wednesday of a heart attack, after a recent brain surgery. He was 60 years old.

During decades of hard living, Mr. Maradona had been declared near death several times and subsequently recovered. But this time, the Almighty had finally snuck the ball through his legs.

In Argentina, the news was received like a national disaster. The President interrupted live broadcasts to address the country. News anchors cried on air. Such was his stature that the government declared three days of national mourning.

“He leaves us, but does not leave,” his sporting heir, Lionel Messi, said. “Because Diego is eternal.”

Even in Brazil – a country he occasionally professed to hate – the country lamented him. He was that good.

Mr. Maradona had in his final years become something of a punchline. But now that he’s gone people are freed to remember him at his best, which may have been the best ever.

Mr. Maradona’s rise to global superstardom had the beats of a fairytale. Born into poverty; spotted by chance; an early blossoming (he made his debut as a pro at 15); recognition at home; an explosion of international interest after appearing in his first World Cup; expectations of great things to come, many of which he accomplished.

These sorts of stories abound in sports. Had Mr. Maradona kept to the road he seemed headed down in his early 20s, he would be considered a pro’s idea of what a pro should look like.

It would have been a formidable legacy, but Mr. Maradona refused it. He was a great one for screwing up good things, then arriving at something more interesting.

At 21, he joined Barcelona for a world-record fee. It didn’t go well. Mr. Maradona was often out injured. Whenever he was well enough to get on the field, his opponents spent most of 90 minutes trying to reinjure him. In fairness, it was the only way they could stop him.

After one particularly irritating shift, Mr. Maradona snapped. During a melée he’d started, he knocked an opponent unconscious by kneeing him in the head. Afterward, he was forced to apologize to the king of Spain, who’d been in the crowd. And that was that for the Diego Maradona era in Barcelona.

His next stop was a step down: Napoli.

The Italian club had a reputation as a team of working-class strivers more interested in getting in fights than winning them. Mr. Maradona was perfect for them. On the day he was unveiled, 75,000 Neapolitans showed up at the stadium.

During his eight years in Italy, Mr. Maradona came to define the club and the city in a way few pros have ever defined any place. Although Naples was not him, Mr. Maradona became Naples.

Freed to play in the way he preferred – as the focus of every move coming from any direction – he dominated Serie A, then the best league in the world.

Even by soccer standards, Mr. Maradona was a small man – 5-foot-5 – but he was built across like a refrigerator. His legs were short, lowering his centre of gravity. His speed, agility and compact body made it nearly impossible to knock him off the ball.

Although mercurial by nature and immaculately skilled, he was also a tireless worker. He generally played in the No. 10 position – a forward playmaker. But he also pulled duty as a striker, a holding midfielder and, in emergency situations, a defender. Often, all in the same game.

This sort of preposterously skilled all-rounder didn’t exist before him and hasn’t since. It’s not that others haven’t tried. It’s just that none of them had Mr. Maradona’s engine powering them.

He would eventually drive Napoli to its first Italian championship. The city was so overcome that the traditional night of wild street partying extended a full week.

But Mr. Maradona’s career zenith came in the 1986 World Cup. The Argentine national team was good, but not great. So Mr. Maradona was forced to win the tournament on his own.

You could summarize his lasting appeal taking just five minutes out of one of those games: the quarter-final against England.

In the 51st minute, he rose to head a ball near the English goalmouth. His hand was held up alongside his head as he nodded at the ball. Although it wasn’t clear from the replay, it certainly appeared that he’d punched the ball into the net. In any case, officials missed it. Mr. Maradona celebrated like an innocent man.

Four minutes after scoring the most notorious goal in history, he would score its greatest. Picking up the ball in his own half, Mr. Maradona spun around and began picking his way through the English midfield. After 20 yards, he was in full flight. Englishmen converged on him – a half-dozen of them – but Mr. Maradona slalomed through them. His final feint took the goalkeeper off his feet and left the net empty. FIFA later chose the tally its “goal of the century.”

Afterward, people only wanted to hear about the handball. Mr. Maradona impishly attributed it to his own head and “the hand of God.”

In that moment, he became not just the most famous athlete on the planet, but its most notorious person.

This duality – the brawling aesthete and the cheerful cheat – was the crux of Mr. Maradona’s appeal. He could be so good and yet so bad. The effect on the public was narcotic.

Which brings us round to the next phase of Mr. Maradona’s career. His fame in Napoli drew in the vultures, many of whom were mixed up in organized crime. He became addicted to cocaine. The happy home life that had given his life ballast hit the rocks.

Things got so bad that Napoli bosses provided Mr. Maradona with a prosthetic penis in order to thwart drug testers. He’d fill the genital ringer with clean urine, which he passed off as his own.

Everything began to collapse at once. Constant partying and private turmoil ruined him as a player. Despite the bathroom hardware, he began to accumulate drug suspensions. He became morose and fat. By the early 1990s – still in his early 30s – Mr. Maradona was effectively done as a player. In the end, he was run out of Naples on a rail.

Once a quiet man, he became a loud one. He picked fights wherever he went, in particular with the entire country of Brazil and its favourite son, Pele. He got in tax scrapes, legal scrapes, medical scrapes and every other sort of scrape known to man. Riding his reputation, he coached in many places and nowhere well.

By the last World Cup in Russia, he was reduced to the role of a drunken jester making a regular fool of himself in the stands. But no one had the heart to deny one last party to the best in history. He hadn’t lived his best life, but he’d lived one hell of a one.

I saw him up close only once, at a media conference during the 2010 World Cup in South Africa. He was then the manager of Argentina and not doing a great job at it.

But I remember that presser – held in a low, concrete dungeon under Loftus Versfeld Stadium and so oversubscribed you needed a ticket to get in – better than any game.

When Mr. Maradona arrived, it was to the keening of middle-aged men. They’d put up crash barriers at the front of the room, which journalists proceeded to crash against. The whole production was ridiculous.

Mr. Maradona’s Spanish was so rapid-fire that I gave up on transcribing and began repeating what I was hearing on the translation headphones directly into my mini-recorder. A geriatric Argentine reporter sitting behind me slapped me in the head. When I turned to punch him in the face, he shushed me. No talking in the Church of Diego.

I had never before seen such reverence for a celebrity, especially one so famously dissolute. But every bit as much as his style of play, that was the key to Mr. Maradona’s hold on the imagination.

He was, as soccer’s poet laureate, Eduardo Galeano, once put it, “a dirty God, who looks like us.” 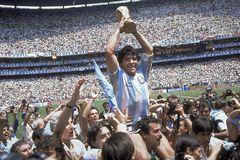