From Brooke Henderson to Bianca Andreescu to Kia Nurse, the Canadian sporting landscape is jam-packed with female stars.

But women’s stories are often secondary behind the virtual blanket coverage of men’s sports.

“[My daughters] don’t relate to female athletes on TV except for maybe during the Olympics when a Penny Oleksiak shows up out of nowhere and you’re like ‘Wow!’ She’s a star for a certain period of time,” Wilson said. “By us trying to build some momentum and some volume where people can start seeing and hearing from and listening to women’s sporting heroes, of which Canada is loaded with some right now – loaded! – we can play a good social role for young girls.”

CBC Sports announced Friday a commitment to providing gender equal coverage in its original content, which Wilson knows won’t be an easy task, but will be a huge improvement. According to Canadian Women & Sport (formerly CAAWS), only 4 per cent of sports programming on Canada’s national networks feature women’s sport.

“And we’re going to make sure that when you look across our entire CBC sports ecosystem over the course of a year, that we’re covering as much women’s sport as we’re covering men,” Wilson said.

CBC made the announcement two days before International Women’s Day, and in conjunction with its “I Commit” campaign, which features Canadian athletes such as sprint star Andre De Grasse committing to supporting girls in sport.

Wilson said while CBC’s commitment to balanced coverage is the “right thing” to do, there’s also a bigger appetite for women’s sports coverage than ever before, and would position Canada’s public broadcaster as a leader in women’s sports.

He pointed to CBC’s coverage of the recent women’s Olympic basketball qualifying tournament. The biggest audience – an average minute audience of 110,000 – tuned in for Canada’s final game versus Japan, despite the fact Canada had already clinched an Olympic berth the game before.

“We’ve just decided that it’s one of the best ways for us to differentiate ourselves ... because we, as a public broadcaster, have different measurements and different sorts of commitments to audience and a different mandate,” he said.

“For us to make that commitment, even though it’s not a slam dunk, we’re in a perfect position to be the leaders in that space, and make sure that women’s sports stories are not in a special section, they’re just ubiquitous among everything that we do, whether it’s on television or on our streaming or written articles or in our podcasts, that we always just have this lens of decision-making that it’s got to be equal.”

“Part of the benefit of this gender equal coverage is to make sure that young girls across the country have the same opportunity to see themselves represented as athletes and see women’s sporting heroes, so that they can imagine themselves doing the same thing,” Wilson said.

With the proliferation of men’s professional sports, and zero major women’s leagues in Canada, Wilson said CBC’s commitment to 50/50 coverage won’t be easy.

“And that’s the conversation we’ve been having is if we say it, we now have to do it,” he said. “The Raptors and the Leafs and all that, obviously, we do feel a need as a news service to cover the biggest stories. But we also know that NHL, NFL NBA is well-provided for by others in our space. And so our strategy, being all about differentiation, I’m not sure that CBC Sports can be different by covering those sports robustly.

“Big stories that affect Canada or Canadians, you know, national events of importance, when the Raptors go on a [championship] run like they did, of course we’re going to pay attention to that. But on a regular Thursday night, regular-season game, it’s got enough coverage.”

Wilson said, without the volume of women’s leagues, the coverage might be presented “in a series of stories, or promoting women’s sports in other ways.”

He added that while CBC’s strategy will also focus on increasing the number of women behind the camera, and “having a voice in covering those on the screen as well as behind.”

Wilson said CBC has been working with Canadian sports journalism programs to help increase the number of female graduates.

“Because part of the problem is when you post a job, you have 60 applicants, of which 55 of them are men,” he said. “It’s sometimes hard to improve your ratios out of those schools. And so we tried to take it one step below and work with a few of the schools in town. And I know that we’re not alone in that, Sportsnet and Bell are also talking about ways that we can increase the general diversity going into those schools, so that the pool for everybody gets better.” 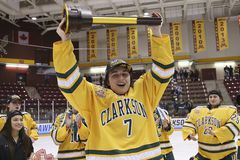 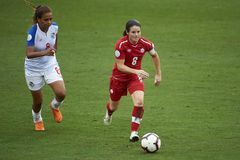