The union representing CFL players blasted the league’s request for a multimillion-dollar bailout from the federal government on Wednesday, saying it wasn’t consulted on the proposal and that the focus should be on “all the workers” who keep the game running, from the players to the parking lot attendants, rather than on a select group of club owners.

“We were not privy to the package,” Brian Ramsay, the executive director of the CFL Players’ Association, said in an interview with The Globe and Mail, referring to the proposal by CFL commissioner Randy Ambrosie for an immediate $30-million in federal assistance, with up to a total of $150-million in relief if the entire 2020 season is scrapped.

“We’re disappointed in learning the CFL’s approach to the federal government. They went to the government with a single face of Canadian football, and we are much bigger and diverse than that. It’s the wrong focus," Ramsay said. “Support for the CFL should not be about nine owners, it should be about the thousands of workers who earn a living wage in our industry."

He added that the CFLPA and the league had been engaged in conversations about contingency planning around the COVID-19 crisis until about two weeks ago, when discussions stopped.

Ramsay is not the only one concerned by the league’s bailout request, as a University of Toronto professor said the league’s “lack of transparency" was a red flag.

On Wednesday, the CFL said in a statement it would legitimately “earn any funding – and pay taxpayers back – by using all the tools at our disposal, including community and public-education programs across the country, the use of our digital channels, stadiums and broadcasts for advertising and promotion, and tourism initiatives surrounding the Grey Cup and other CFL events. We want to be accountable.”

Prime Minister Justin Trudeau acknowledged the federal government was in discussions with the league. “We know it’s important to them and important for many Canadians, and those discussions are ongoing,” he told reporters Wednesday.

But the league refused a request from The Globe to elaborate on its need for assistance, or the nature of the promotional efforts it envisions using to earn the federal funds.

“In my mind, $150-million is ridiculous,” Richard Powers, an associate professor at the University of Toronto’s Rotman School of Management, told The Canadian Press. “Without any transparency, we have no idea what that money would be used for.”

The league’s 2020 season, originally scheduled to begin June 11, is officially on hold until at least July. If the season is scrubbed in its entirety – which Ambrosie this week called a “worst-case scenario,” but which seems increasingly likely, given the pronouncements of public-health officials – it is unclear what costs the league might incur that would necessitate a high-priced bailout.

An individual familiar with the business operations of the CFL – whom The Globe is not identifying because they are not authorized to speak about league operations – said in an interview on Wednesday that the league would not likely be required to pay players, most of whom would be eligible for employment insurance and the Canadian Emergency Response Benefit. The league would also not have in-game management or officiating costs. The clubs would likely be able to renegotiate their lease agreements, as commercial tenants are doing across the country.

In its Wednesday statement, the CFL said that it is a “unique” league whose players “are what you might describe as ‘working class heroes’” who do not pull in the kind of paycheques of other major-league athletes. “One superstar in some other U.S.-based leagues might make as much as the rosters of several CFL teams combined. We are a Canadian league without access to giant TV markets in places such as New York and California.”

CFL clubs depend more than most major-league sports operations on revenue from ticket sales and other game-day revenue, rather than sales of TV rights. In 2018, gate receipts accounted for 38.3 per cent of income for the Edmonton Eskimos, according to the club’s annual report, with concessions and other game-day revenue accounting for an additional 16.2 per cent. Only 17.4 per cent of its revenue – or about $4.4-million of its $25-million total revenue – came from what are known as CFL Distributions, the bulk of which comprises revenue from the league’s TV contract.

That may help explain why Ambrosie, in an interview on Sportsnet Radio this week, all but ruled out playing games without fans, which is an option that some other leagues are exploring.

TV rights to the CFL are held exclusively by Canadian broadcasters TSN and RDS.

U.S. and European leagues can command enormous rights fees from broadcasters. On Wednesday, Amazon said it had sealed a three-year renewal of its contract for a package of NFL games. Under its previous terms, which are believed to have increased for the new deal, Amazon is estimated to have paid US$65-million annually for 11 games a year: about US$5.9-million a game, which is more than CFL clubs make on broadcast rights in an entire 18-game regular season, plus playoffs. Last month, the NFL said it had sold the broadcast rights to two new wild-card games next season for more than US$140-million. 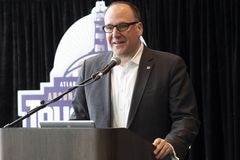 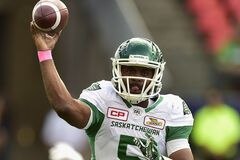