Chase Outlaw has the perfect cowboy name and the rugged features of a motion-picture bronco buster. A hard jawline and a penetrating gaze. The only evidence of the bull-riding accident he suffered last year is a slight bit of muscle weakness below the left eye.

It is the exact spot where his head slammed against the base of one of War Cloud’s horns. His face exploded inside itself. Thirty bones shattered.

He is 5 feet 6 inches and weighs 150 pounds. For a living, he rides whirling, bucking beasts that weigh nearly a ton. He is in Calgary for the next week competing at the famous Stampede. Heading into the event, he is the third-ranked bull rider in the world.

He had recently returned from having both shoulders rebuilt when the violent blow to the face occurred. It took 12 hours of surgery, and another seven hours at a later date, to fix.

“Quitting never crossed my mind,” says Outlaw, 27. He is from Arkansas and has a syrupy Southern accent. “It is what I love to do. If you had an accident going to get groceries, you wouldn’t decide not to get groceries again.”

He had facial-reconstruction surgery, and it kept him off bulls for only 75 days. He has made only one concession since he returned: he wears a helmet now when he rides.

“You always know the risk and the danger is there,” Outlaw says from his home in Hamburg, Ark. It is also the hometown of NBA great Scottie Pippen and the site of a summer armadillo festival. “Being able to come back and face that giant is what separates the men from the boys.

“You have to be very strong mentally and block out negative thoughts. You use whatever fear there is inside you and turn it into fuel.”

The accident happened on July 23 during a Professional Bull Riders rodeo in Wyoming. In a matter of seconds, War Cloud lurched backward and threw Outlaw forward. They smacked heads and he fell off.

He laid in the dirt stunned, and then staggered to his feet. He walked out of the ring on his own, blood splattered across his cheeks.

“I just thought my nose was broke,” Outlaw says.

William Wyatt was at the show as an on-call physician. The doctor saw the accident and immediately examined the rider in a trailer that was being used by the tour’s sports-medicine team.

“I felt his nose and could see that his cheeks were pushed in, but I still did not realize the extent of his injuries,” Dr. Wyatt says. “He was alert and said it felt like his nose was swelling. Then he blew it and blood filled his sinus cavities and ran into his eyes.”

The doctor sent him by ambulance to the Cheyenne Regional Medical Center and met him there. Outlaw’s wife, Nicole, and sister, Brittany, were also waiting when the ambulance arrived.

“When we got to see him, one eye was black and swollen and there was a tiny cut at the top of his nose,” Brittany says. “I thought his nose was probably broken and they would tend to that and we would be out of there pretty quick. “You couldn’t really see that much was wrong.”

Dr. Wyatt ordered X-rays and was shocked by what he saw.

“He was pretty close to having a pan-facial fracture, which is when all major bones are broken in your face,” the physician says. “On a scale of one to 10, he was a nine.”

As luck would have it, Dr. Wyatt is a reconstructive surgeon. Within an hour, he was operating. It needed to be done immediately to control the bleeding and keep the swelling to a minimum.

“I will never forget the doctor sliding his glasses down to the end of his nose and looking at us as he spoke,” Brittany says. “He said, 'Girls, what we are about to do to him is very extensive.’

“Then he showed us the X-rays. Nicole and I tried to stay strong for Chase, but we had tears in our eyes.”

Over the course of the next 12 hours, Dr. Wyatt inserted 68 screws, 11 titanium plates and four pieces of mesh into Outlaw’s face.

“That is a lot of hardware,” the surgeon says.

Outlaw had 15 fractures on each side of his face. The broken bones included bilateral bony orbital rims, bilateral floor orbit blowouts, naso-orbital-ethmoid fractures, open nasoseptal fractures, a bilateral maxillary fracture, broken nasomaxillary buttresses and both cheek bones. His eye sockets were broken, as was his nose.

It was an extremely complicated and delicate procedure because of the number of bones involved. Before he started, Dr. Wyatt estimated the operation would take 6½ hours. It nearly lasted twice as long. Essentially, the framework of the cowboy’s face had collapsed and needed to be rebuilt.

“The first thing I did was wire his jaw shut because that sets the width of your face,” the surgeon says. “Once that is done, you start building from there.”

The multiple fractures caused extensive bleeding. The only way to make it stop, Dr. Wyatt says, is to put the bones back in place.

“You have to be very accurate,” he says.

Cheek bones were put in position, and then Outlaw’s orbit bones were fixed. Then his nose was patched up. A piece of bone cut from his skull was used to graft the top.

“It is a long haul, but you focus and get it all done,” Dr. Wyatt says.

Dr. Wyatt’s hospital care was also expensive. Health insurance paid most of the bills, but it didn’t come near to covering the cost. Friends even set up a GoFundMe page to help with his medical expenses and raised US$43,000.

Brittany, who is four years older than Chase, talked to him about the possibility of giving up bull riding as he recovered in the hospital.

“I would have been okay if he had decided not to get back into it,” she says. “I told him, ‘If you don’t want to do it any more, don’t worry about how you are going to provide for your family. We will all work together and take care of that.’

“When I said it, he looked at me like I was crazy.”

Bull riding is easily the world’s most dangerous sport. Head injuries are frequent and increasing, in part because bulls have been bred to be bigger and more athletic. The G-forces riders face as they are whipped around surpass those experienced by fighter pilots and astronauts.

Outlaw says the accident evolved so quickly that he never had a chance to worry.

Tanner Byrne, a fellow bull rider, was watching a live-stream broadcast when Outlaw cracked heads with the bull.

“I have seen a lot worse-looking wrecks where guys get up and are absolutely fine,” Byrne says.

He sent text messages and called to check on him, and was stunned when he heard how serious the injuries were.

“Chase is about the only bull rider in our generation that would use it to fuel his drive to a whole new level.”

Outlaw returned to riding in October and was better than before. He came out of the chute and completed eight successful eight-second rides in a row.

He was 87th in the world when he came back and within three weeks was in the top 35. In November, he finished 16th at the Professional Bull Riders (PBR) world championships in Las Vegas. After that, Dr. Wyatt performed seven additional hours of surgery, removing and replacing some of the plates and screws in his face.

“It was just a little touch-up,” Outlaw says. “If I hadn’t had it, some of the screws would have eventually come out.

“Everything is back to normal.”

Well, almost. His face itches, and he occasionally suffers from nerve pain.

“I drink something hot and it suddenly feels like someone is sticking a needle under my eye,” he says.

He is now in the midst of the best year of his career He has won six PBR riders events and has already earned more than US$210,000 in prize money. On Canada Day, he delivered two flawless rides to win a PBR event in Cluny, Alta.

He has never won the Stampede but must be considered among the favourites. He trails only Jose Vitor Leme of Brazil and American Jess Lockwood in the world standing.

“It is astonishing what all he has overcome,” Brittany says. “It makes my head spin.”

Outlaw has had other setbacks in his life. Along with serious injuries to his shoulders, groin, pelvis and hand, his grandmother and mother have died. Bull riding has also killed two close friends. One of them, Mason Lowe, died in a bull-riding accident earlier this year at a PBR event in the United States. He was tossed from a bull, which stomped on his chest and caused fatal damage to his heart. Chase was at his side as he lay on the dirt in the arena and was with him at the hospital later that night when he died.

“I tell myself that all of the loved ones I lost are watching me ride,” he says. He has deep religious faith, and believes it has played a part in his comeback. “What it boils down to is everybody’s prayers and your faith in God. I have been touched by his healing hand.” 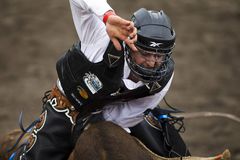