China is serious about winning Olympic curling medals on home ice in 2022, and the country has enlisted a bunch of Canadians to help.

China has recruited Canadian expertise before, but the size of current intake is eyebrow-raising. Mike Harris, Dan Rafael, Carolyn Darbyshire-McRorie and Perry Marshall are all coaching the Chinese this season.

Calgary’s Darbyshire-McRorie, who won an Olympic silver medal in 2010 playing second for Cheryl Bernard, is working with four of China’s top women’s teams.

Montreal’s Rafael is coaching in the men’s national program. Toronto’s Marshall is involved in the junior ranks.

“I’m working with the entire program,” Harris told The Canadian Press. “They’ve obviously got a big focus for 2022 as they’re hosting the games. They’re trying to make sure they’re covering all the bases.”

Harris, who skipped Canada to Olympic men’s silver in 1998, is a television commentator in addition to his Chinese job, which he says is a four-year commitment.

Beijing will host the Winter Games in less than four years, and the host country wants to win a lot of medals on home ice and snow.

While that ups the demand there for international expertise across all sports, Harris also forecasts a curling explosion in China.

“I heard they’ve mandated, which only they can do, that 130 million in the next 10 years are to start winter sport,” Harris said. “Even if only one per cent of that is curling, that’s over a million curlers.

“There’s not enough granite to make that many curling rocks.”

Rafael coached China’s Bingyu Wang to Olympic bronze in 2010, but this is Darbyshire-McRorie’s first international coaching assignment after working with Canada’s Casey Scheidegger.

“I stepped back just because the team was needing something else other than me,” Darbyshire-McRory said.

“That’s what happens when you coach. You tend to coach yourself out of a job. They grow so much that they need somebody else.”

The Canadian contingent succeeds Edmonton’s Marcel Rocque, who coached China at the 2014 and 2018 Winter Games and joined Rachel Homan’s rink this season.

“What I like about it is instead of having one person looking after the whole program, we do have myself in the women’s, Dan in the men’s, Perry with the juniors so that you’re not spread so thin,” Darbyshire-McRorie said.

She and Harris work with Chinese teams when they come to North America for World Curling Tour events and training camps. Darbyshire-McRorie has travelled to Beijing this winter more than Harris.

“I’m enjoying it because I’m giving back to curling,” she said.

The market for Canadian curling coaches abroad has expanded as more countries get serious about contending internationally.

That was evident at the 2018 Winter Olympics in Pyeongchang, South Korea. You couldn’t spray a handful of bird seed at the Gangneung Curling Centre without hitting a Canadian wearing another country’s colours.

Canada’s failure to win a medal in men’s or women’s team curling prompted hand-wringing over whether helping other countries in the sport comes at the expense of Canadian teams.

The same sentiment was expressed in hockey circles after Canada didn’t win a men’s hockey medal in 1998.

But demand drives the market for foreign coaches and not just in curling, Harris pointed out.

“I think everyone is panicking because of what happened in Korea, which is silly,” he said. “We have Austrian ski coaches in the (Canadian) program.

“If you are serious about your sport, you kind of go ‘where are the best practices?’ and that’s not unique to curling. If someone is good at a sport, I think you’ll go there first for help.”

“They pay,” Harris said. “If we stayed here in Canada, it depends on the arrangement you have with a team, but it’s not a salary.” 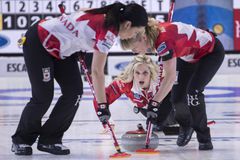 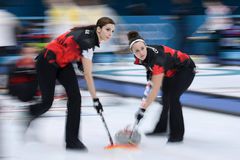