If nothing else in this pandemic-ravaged winter, coaching tenures appear to be thawing in Montreal.

For the second consecutive day, one of the city’s professional sports teams was left to deal with a transition in the head-coaching ranks.

But while Claude Julien’s firing on Wednesday was entirely the Canadiens’ doing, for the newly rebranded CF Montreal – formerly the Montreal Impact – of Major League Soccer, Thierry Henry’s departure was entirely his call.

With the team preparing for the start of training camp on March 8, the French World Cup winner flew home to London two weeks ago to be with his children, who club president Kevin Gilmore said had been “struggling” since Henry returned to Montreal in late January.

And with the pandemic forcing the three Canadian MLS clubs to begin their seasons in the United States, just as they did for the majority of 2020, Henry decided to put family first. He told Gilmore and sporting director Olivier Renard last Thursday that he was leaning toward leaving, before finalizing his decision on Monday.

“Unfortunately due to the ongoing restrictions and the fact that we will have to relocate to the U.S. again for several months [this year] will be no different,” Henry said in a statement. “The separation is too much of a strain for me and my kids. Therefore, it is with much sadness that I must take the decision to return to London and leave CF Montreal.”

After surviving a suitcase existence last year to lead Montreal to its first playoff appearance in four seasons, along with a trip to the quarter-finals of the CONCACAF Champions League, he leaves with the club’s full support.

“Is it perfect timing? Absolutely not,” Gilmore said on a Zoom call Thursday. “But like I said, there is no deadline or prescription date on personal decisions and we fully understand where he’s coming from, the situation he needs to address personally and we’re going to move forward and do what we need to to make sure this club is ready for the start of the season.”

Renard said the process of finding a replacement will begin immediately, with assistant coach Wilfried Nancy taking over the day-to-day operations of the playing staff until that hire is made.

Although Henry’s departure is a loss from a leadership and coaching standpoint, it is arguably an even bigger one from a marketing point of view. The club spent a considerable amount of time and owner Joey Saputo’s money to rebrand the franchise as Club de Foot Montreal last month.

The club unveiled a new snowflake-styled crest, team motto and club colours (Impact Black, Ice Gray and Sacré Bleu). It has also been busy this off-season on the roster front, acquiring a host of new players, such as Argentine midfielder Joaquin Torres and former Whitecaps forward Erik Hurtado.

But on the global scale, it was Henry who really put Montreal’s MLS franchise on the soccer map. Case in point was Thursday’s Zoom call, which featured journalists from English Premier League broadcaster Sky Sports, as well as British soccer magazine FourFourTwo. By contrast, Greg Vanney’s departure from Toronto FC last month barely made a ripple on the round-ball Richter scale.

“Of course it impacts us,” Gilmore said. “We knew when Thierry came on board that not only did he come because he was Olivier’s first choice as a coaching candidate, but he also came with a presence and a reach that would only help us.”

The timing of Henry’s departure also followed hot on the heels of reports in the British press that he was set to take over at AFC Bournemouth in the English Championship, a team challenging for promotion back to the EPL. But that position was filled by former England international Jonathan Woodgate last weekend.

Gilmore said the connection was “nothing but a rumour” and that no one had contacted Montreal asking for permission to speak to the former Arsenal and Barcelona striker. However, given the recent speculation linking Henry with a job back in England, Montreal has made sure it will receive some sort of compensation if he does take another position in the near future.

“I’ll tell you right now, there’s nothing on his mind with respect to what he’ll do next,” Gilmore said of Henry. “Right now his sole and only focus is his children and his family.”

For Montreal, the focus is now on finding an appropriate replacement who is able to continue the work Henry started. Both the Frenchman and the club hierarchy shared a mutual affinity for possession-based soccer, had started acquiring players to bear out that vision and had hoped the team would be playing that way for seasons to come.

“The connection that I had with Thierry was more than positive,” Renard said. “What we want to do now that he’s left is we want to find the best coach to follow the philosophy of Thierry and my philosophy.” 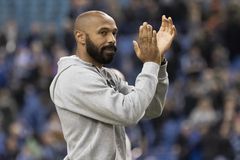