It has been nearly three weeks since the Vancouver Canucks played and the COVID-19-stricken team still has no idea when it will be able to resume practice or play its next game.

With the rest of its season seemingly hanging in the balance, members of the club’s medical staff were scheduled to meet on Friday with public health authorities in British Columbia and officials from the NHL.

Twenty-one players and four members of the Canucks coaching staff have tested positive for the novel coronavirus, and a number have become ill. One additional player is in isolation because he may have been exposed to the respiratory illness that has killed more more than 23,000 Canadians and 2.9 million people worldwide.

Jim Bovard, the team’s physician, said earlier in the day that a variant caused the virus to spread rapidly among individuals. Genome-sequencing tests are still being conducted to identify which variant is involved.

None of the players has needed to be hospitalized, the doctor said. The infection rate has begun to wane, although family members continue to get sick.

“What’s happening with us is just a microcosm of what is going on within the community,” Bovard said during a video call with journalists. “We have had a whole range of what we have seen in COVID-19 cases for the last year. There has been nothing unusual.”

The first case among a team member came about as a result of community transmission, the doctor said. He said it occurred even though health and safety protocols were being followed.

“There is no culprit other than the virus itself,” Bovard said.

The Canucks have not played since a March 24 game at home against the Winnipeg Jets. They have had six games postponed thus far, and have games in Edmonton on Monday and Wednesday that are also expected to be scrapped. Their next potential opponent after that would be the Maple Leafs in Vancouver on April 17.

If that game is played, it would be Vancouver’s first in 24 days. It has 19 games left in an abbreviated 56-game regular season, with the last scheduled for May 8. Although the league could extend the season by a few days, that would still leave the Canucks with a very tight window to see it through to the conclusion.

“I think for the most part that our players are on the other side of this,” said Jim Benning, the club’s general manager. “The conversations that I have had with the league is that we are expected to resume playing games, and complete a 56-game schedule.

“Our first order of business is getting our players healthy, and them ramping up to practices and playing games. As we go through it, we’ll learn more. This is new to everybody. We’ll see where it goes.”

The team has not played up to expectations and is not among the leaders in the NHL’s all-Canadian seven-team North Division. The top four advance to the playoffs.

Bovard said he believes the team has experienced a peak in cases.

”We are moving into a phase from a period of new infections to dealing with the cases and then moving through that into recovery,” he said. “We are taking it day-by-day and managing every one of them step-by-step in order to get them back to health and back to doing their jobs.

“It has been a difficult week. These are tough guys and tremendous athletes and they have become fathers, sons and brothers suddenly [challenged] by their health. It is a very human situation.”

A handful of teams have got sidetracked by COVID-19 this season, but none more than the Canucks. Unlike the other major pro sports leagues, the NHL has a number of Canadian franchises. That has complicated matters in numerous ways. While players on some U.S.-based teams have been able to get vaccines, those in Canada have been unable because of a slower rollout and age restrictions.

“The biggest concern is not getting the vaccines that are necessary,” Darryl Sutter, the Calgary coach, said this week. “We should be getting ours like everyone else in the world.”

Mark Giordano, the Flames captain, said Friday that he is keeping close tabs on the evolving situation. The Flames were in Vancouver on March 30 for a game when it was cancelled at the last minute.

“It hit close to home,” Giordano said. “You hope for the best for the other guys and their families. To have that many cases … it just ran right though them. I have two young kids at home and worry about them. I worry about my wife. I’m sure those guys [in Vancouver] are the same way.”

British Columbia announced a record 1,293 cases on Thursday. A workplace closure order is set to go into place on Monday for businesses with three or more employees diagnosed with coronavirus.

What influence that will have on the Canucks, who are hoping to resume normal operations, remains to be seen.

“Health authorities are looking very closely at us,” Bovard said. “We’ll restart work only when we are given the guidance to do so. They have to declare that it is safe.

“You don’t want to get this virus. It is tricky, and it is changing. We could go back and look and find a lot of what-ifs. We have to learn from that. If we knew what was going to happen next, it would be a lot easier for everybody.” 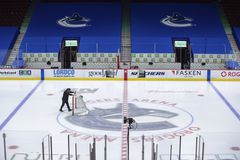 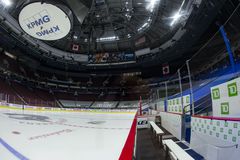 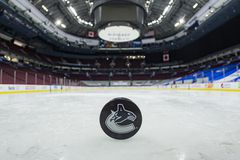