The head of Curling Canada is bullish about its financial position.

And that’s with a TV contract about to expire.

Henderson, who took over as CEO from Greg Stremlaw in 2016, confirmed 2020 is last year of the current television rights contract with TSN.

She won’t comment on extension negotiations. But she’s confident enough in Curling Canada’s bottom line to pump up prize purses at the men’s and women’s national championships, the Canada Cup and Continental Cup by 43 per cent to a total of just under $1.1 million.

“The organization has been doing quite a bit better financially over the last few years,” Henderson told The Canadian Press. “What we were able to do is to sit down as a team and start to prioritize investment.

“We’re in the not-for-profit business, which doesn’t mean we don’t make a profit, but we have to invest it back in the sport.”

Next month’s Scotties Tournament of Hearts in Moose Jaw, Sask., will be the first to offer the same prize money as the men’s Tim Hortons Brier to the tune of $300,000 per tournament.

“The bigger the carrot, the harder people work,” Henderson said. “I think it improves the product. When the stakes are high, it’s just a little more exciting.”

Prize money is the buzz in Curling Canada’s recent announcement of a $3.5-million investment in high-performance because the women’s Tournament of Hearts money lagged behind the men for so long.

“It’s not quite at the gate there, but in terms of the audiences and it’s prestige and it’s value to sponsors, it’s very much getting there. As a female who has worked in sports for a number of years, that felt emotionally like a really good statement to make. But as a business person, it actually felt like a better statement to make to say ‘I’ve improved the business proposition of both these things.“’

According to Curling Canada’s 2019 annual report, the organization’s accumulated year-end surpluses increased almost $2 million between 2017 and 2019 jumping from $4.89 million to $6.84 million.

“I say it with no disrespect to the people that came before me because the organization was healthy,” Henderson said. “We made a number of fundamental business changes when I arrived.

“We took a look at a price-up, spend-up strategy. You make the investment to improve the product, right? Then people value it more and are willing to pay a little bit more for it. They’re more entertained, they’re having a better time.

“We were able to invest a lot in our financial resiliency, which is our reserve. We’ve diversified our revenue a little bit. We’ve got some incremental money coming in that maybe we haven’t had before.

“We’ve done some licensing deals and some merchandise deals. All of these things add up so pretty soon, you’ve just got a healthier bottom line.”

So investing in their prestige not only for fans, but also for the participants competing in them, was important for Henderson.

“We have to make sure when the athletes get there, it’s not just watering and feeding them, that they have a quiet place to sleep, a gym to work out in and they’ve got a place for a team meeting,” she explained. “We try to provide an atmosphere that gets the best possible performance out of the athletes.

“No one is being picked up in limousines. We’re not the NHL or the NFL, but they’re all well taken care of.”

The organization’s mandate is also to attract and retain curlers, assist curling clubs and develop the next generation of Team Canada.

“We’re not the NHL. We’re more like Hockey Canada,” Henderson explained. “We’re very responsible for funding a lot of grassroots type of programs and recruitment programs to get more curlers in, try to make more curlers curl better, have fun and stay with us for longer. That keeps clubs healthy.

“We’re constantly having to balance off with what it is that we do with how we share the spoils of what we do.”

A couple of Tournament of Hearts stalwarts return to next month’s Canadian women’s curling championship in Moose Jaw.

They’ll join defending champion Chelsea Carey of Calgary and Lori Eddy’s foursome from Nunavut among the early entries into the 16-team field Feb. 14-23 at Mosaic Place.

Erica Curtis beat Mackenzie Mitchell 8-2 in Tuesday’s final in St. John’s to earn the right to represent Newfoundland and Labrador next month.

All provincial women’s playdowns will be wrapped up by Feb. 2.

It’ll be clear then which teams meet in the Feb. 14 wild-card game to gain entry into the Hearts field.

The top two women’s teams in the Canadian Team Ranking System (CTRS) that didn’t win their province or territory will duke it out in an elimination game on the eve of the main draw.

Tracy Fleury from Sudbury, Ont., who was the Hearts runner-up in 2018, is currently ranked No. 1 over 100 points up on No. 2 Kerri Einarson of Winnipeg.

But just under 12 points separates Einarson, who lost last year’s wild-card game in Sydney, N.S., to Casey Scheidegger, from fellow Manitoban Jennifer Jones at No. 3.

The organization is revamping its junior program and will start holding junior nationals later in the curling season starting next year.

The victors of the 2020 championships starting Saturday in Langley, B.C., will represent Canada in February’s world juniors in Krasnoyarsk, Russia. 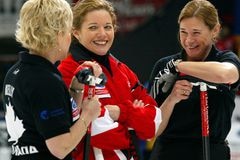