Nicolas Deslauriers is known as a grinder and an enforcer, not a goal scorer. But the Anaheim left wing put himself in the Ducks’ record book in a way he least expected.

Deslauriers scored the fastest hat trick in franchise history as Anaheim rolled to a 5-2 victory over the Ottawa Senators on Tuesday night.

“It’s pretty weird, to be honest with your guys. Just scoring a goal is something special,” Deslauriers said about his first hat trick in 375 NHL games. “It might take me another five games to put a puck on net. It is something special and fun to do at home.”

Deslauriers completed a natural hat trick 11:49 into the game with a wrist shot from the left circle that went off Ottawa goaltender Marcus Hogberg’s glove and shoulder to give the Ducks a 4-0 lead. It was his second goal in 32 seconds, after he scored on a one-timer from the slot.

“To see a guy get rewarded like that scoring goals when that’s not something he’s known for, it makes for a great night,” Anaheim coach Dallas Eakins said. “The guys were so excited for him on the bench. That was probably the biggest smile I’ve seen from Des, as well.”

Deslauriers – who came into the game with four goals – got his first of the night at 2:45 after he took a cross-ice pass from Carter Rowney and beat Hogberg to the short side with a wrist shot. Jakob Silfverberg opened the scoring 43 seconds earlier when he deflected Rickard Rakell’s shot into the net on a power play.

Deslauriers’ hat trick was the third completed in the first period in the franchise’s 26-year history. Teemu Selanne held the previous Ducks mark for quickest hat trick at 12:58 in 1997.

“These are the moments that you remember that make the game special. A guy like that who might not have a hat trick in his career, to do it in 12 minutes is pretty special,” said teammate David Backes, who had two assists.

Anaheim – which has earned a point in four straight games – was outshot 42-15 but scored on five of its first eight shots. Rakell had a goal and an assist, and Rowney also had two assists.

Ryan Miller made 40 saves, marking the 20th time in his career he stopped 40 or more shots in a game.

“As much as you would die for a lead like that, it throws the game totally off kilter,” Eakins said. “When you get up like that you lose your focus. Our 5-on-5 game was not good.”

Brady Tkachuk and Colin White both had a goal and an assist for Ottawa, which had won four of five. Hogberg stopped 10 shots.

“It would be pretty cool to have a natural hat trick,” Tkachuk said of Deslauriers. “He played well tonight. He was all over the ice. He’s physical, too.”

Tkachuk put the Senators on the board 6:06 into the second when he took White’s pass and beat Miller to the short side for his 21st. Rakell put the Ducks back up by four with their second power-play goal of the game three minutes later.

White had the only goal in the third when he put a wrist shot by a screened Miller.

Miller has 387 wins, two behind Dominik Hasek for 14th place on the NHL career list. ... Rakell has seven points in the last four games (two goals, five assists). ... Rowney is one point shy of his career high of 20 set last season. ... Ottawa is 3-6-4 in the first half of back-to-back games.

Senators: Remain in Southern California to face the Los Angeles Kings on Wednesday.

Ducks: Host the St. Louis Blues on Wednesday in a game that was stopped and rescheduled after Blues defenceman Jay Bouwmeester suffered a cardiac episode 12:10 into the first period on Feb. 11. The game will be a full 60 minutes and begin with the score tied 1-1, as it was at the time of the postponement. 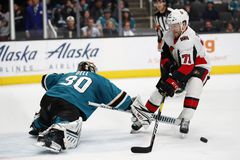