Toronto FC believes it can see light at the end of the tunnel, both on and off the pitch.

The hope is that with vaccination numbers going up and Ontario slowly re-opening, the MLS team can return home to play at BMO Field sooner than later. And despite an underwhelming 1-5-2 start, coach Chris Armas and the players are confident they can recalibrate as needed on the field.

“We need these points,” he added.

Gonzalez believes a win Wednesday can kick start the season – and get TFC back on track.

“We know who we are,” he said. “We know we have the team that’s capable of getting it right and capable of going far this season. We aren’t counting ourselves out. And I don’t think anybody should. We have a very talented group and we’re just still figuring it out.

“We’ve got a new coach, new ideas and finally have a healthy group, which is great. Obviously we’re still missing some guys but I think as disappointing as the loss was last game, there’s a lot of good things to build off.”

The positive news back home about the fight against COVID-19 has created “a little bit of buzz” in TFC ranks, according to Gonzalez.

Saturday’s 3-2 loss to Orlando saw Toronto fight back after conceding two goals in the first eight minutes, only to give up an 84th-minute winner.

Nashville, meanwhile, is coming off a 2-0 loss Friday at the New York Red Bulls.

Toronto has lost three straight and is winless in four games (0-3-1) since notching its lone victory of the MLS season, 2-0 over Columbus on May 12. While the team had a disjointed preseason owing to the pandemic and has had to deal with the absence of key personnel, many of the on-field problems have been self-inflicted – from set-piece breakdowns to conceding goals after turnovers.

Beyond the blunders, Armas sees a team that is making headway.

“I can see it happening for large stretches of the game,” he said. “And probably more importantly, I think the players can see that. So it becomes something real, not just a coach or [something] on a tactics board talking about a theory.”

“It’s all correctable,” said Armas. “And I think that gives the guys confidence, that when we put it together, we all of a sudden become really, really hard to play against and really hard to beat … There’s work to do and we put it to the test [in] 24 hours or so.”

Toronto faces a Nashville team that saw its seven-game (2-0-5) unbeaten start to the season snapped in the loss at the Red Bulls. Like TFC, Nashville is happy to get a chance to rewrite its narrative.

“It’s always nice to play games in such quick succession because you can kind of forget about it and focus on the next one,” said Nashville goalkeeper Joe Willis. “We looked at video of the New York game and then put it in the past. Now we focus on Toronto.”

It’s the first meeting between the two since Nov. 24, when a 108th-minute goal by Daniel Rios lifted expansion Nashville to a 1-0 win in East Hartford, Conn., that ended TFC’s season in the first round of the playoffs. Toronto, second in the Eastern Conference, had finished 12 points ahead of Nashville in the 2020 regular season.

“They’re a good team,” Willis said. “They have a lot of attacking pieces that can hurt you. So defensively we’re going to have to get back to what we’re used to, in keeping clean sheets and staying organized. They’ve had an up-an-down year. But teams like that are especially dangerous because they’ve got to go for it at this point and they’ve got to start throwing caution to the wind and try to score goals.”

Nashville established itself last year as a well-organized defensive unit that didn’t score much (24 goals in 23 regular-season games) but conceded even less (22 goals). It ranked third in the league in defence last season, conceding 0.96 goals a game on average.

“There’s a lot to their team, maybe more than most realize,” Armas said. “But we have a lot of respect for that team.”

Nashville fullback Alistair Johnston finds himself going up against TFC players he lined up with for Canada during the recent international break.

“There was a lot of smack talk going on … I was pretty happy going in there saying we were undefeated,” he said. “No matter what the record was there were no [losses] in the [win-loss] column at that point.”

Nashville coach Gary Smith says star defender Walker Zimmerman, who came back from U.S. national team duty with a minor injury that curtailed his time against the Red Bulls, has trained well since then. Forwards Rios (groin) and Dom Badji (ankle) and midfielder Brian Anunga (quad) are close to returning.

Forward Jhonder Cadiz, one of Nashville’s designated players, is away with Venezuela.

HOME SWEET HOME: Wednesday’s game is the first of five straight at home for Nashville, who will entertain CF Montreal, Philadelphia and Atlanta after Toronto. Nashville (2-0-3) is unbeaten at home this season. 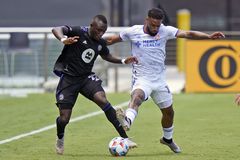 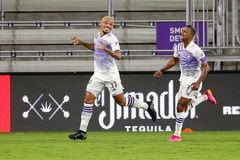 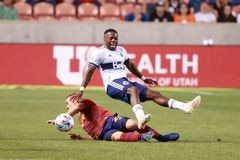