A tennis player’s off-season is unforgivingly brief. Yet Denis Shapovalov enjoyed his to its fullest, vacationing in Greece and tinkering with his new hobby – rapping.

The 19-year-old Canadian star finished his first full season on the ATP Tour at the end of October ranked No. 27 in the world and was off to the Bahamas on Wednesday to start conditioning for the 2019 season. His short downtime included family time in Athens, a charity gala in Toronto and studio time with Canadian hip-hop artists to learn about the craft.

“I’ve been writing lyrics for about a year now, and it’s just a fun new hobby, but I’ve always wanted to be an artist, always had this inner thing inside me that I want to release,” Shapovalov said. “I showed a couple of little recordings I’d done to my coach, and it was just inside my team before, and I would never share those with anyone. But he said, ‘Why don’t you actually go in a studio and try something?’ "

Shapovalov’s new coach, Rob Steckley, connected the young tennis player with some Toronto musicians he knows, including Marcus Haran and Armando, to get him in the studio and behind a microphone. They posted some highlights on Instagram.

“I was so nervous they’d judge me and tell me I’m no good at it, but they were super chill and helped me,” Shapovalov said. "It’s something I’ve wanted to do for a while, so when I had a few weeks off, I said, ‘Let’s go for it.' Once I pick up the racquet again, that’s it. I won’t be thinking about music anymore.”

Shapovalov’s last day in Toronto was spent at a charity gala at Hotel X on Tuesday. The event included an exhibition match between Shapovalov and Canadian Davis Cup captain Frank Dancevic before a crowd inside the hotel’s luxury athletic club, followed by music and dinner. He headlined the event, which raised funds for the Lights Foundation, a charity that works with Community Living Toronto on supportive housing for people with intellectual challenges. The charity is a passion project for Mary Pat Armstrong, a founding director of Toronto’s Ronald McDonald House and a well-known philanthropist, who, along with her husband Bob, began helping Shapovalov with his tennis expenses through their charitable foundation when he was climbing the junior ranks.

Shapovalov did a handful of interviews during his last day in his hometown, now wearing his usual shaggy blond hair in a much shorter cut. He says he’s ready for hard, physical off-season training that will carry him through to January, when the tour resumes play at an Australian Open tune-up tournament in Auckland.

In the Bahamas, where he keeps a home, Shapovalov will first train in the resort community of Albany. Then he’ll move to Bradenton, Fla., to resume work alongside many of his tour counterparts at Nick Bollettieri’s IMG Academy.

Shapovalov earned US$1.46-million in prize money in 2018, compiled a 35-28 record and made three semi-finals – in Tokyo, Madrid and Delray Beach. He ended the season with first-round exits in Basel and Paris. Then he withdrew from the Next Gen ATP Finals in Milan, held for the tour’s top eight players under the age of 21, citing exhaustion.

Shapovalov said he’s feeling healthy and rested. He parted ways with Montreal coach and former long-time Davis Cup captain Martin Laurendeau, who struggled with his own back pain last year.

“Marty had the problem with his back, and that took a little bit for him to recover. I also thought I should have a coach who has been there with a top player and has that experience, so it was a business decision a little, too,” Shapovalov said. “But Marty and I still remain very, very close. He did so much for me, and he was amazing.”

Steckley, a Canadian, was alongside Shapovalov in the final months of his 2018 season and has also been coaching Lucie Safarova. The 31-year-old Czech WTA star, a former world No. 5 and French Open finalist, has announced she’s retiring after the 2019 Australian Open. That made Steckley available to join Shapovalov’s team, coaching in tandem with his mother, Tessa Shapovalova.

"My mom is working with Rob in terms of what I need to work on, and he’s been a great asset to my team so far,” Shapovalov said. “He’s a great coach and so fun off the court, too.”

Steckley has a talent for creating videos and has a company called Tennis Cool Productions. He posts short videos on social media, taking viewers behind the scenes as his team explores cities such as Tokyo, Stockholm and Paris while playing on the Tour.

“Everyone on my team has a real artistic side. Rob is phenomenal with his videos and his editing, my physio [Stefano De Pirro] takes amazing pictures and Monday morning videos. I have my music,” Shapovalov said. “We love to pitch artistic ideas to each other while we’re travelling – ‘Hey, let’s take that photo or write a song about that’. There can be a lot of dead time when you travel as much as we do, and being creative like this makes it so much more fun.” 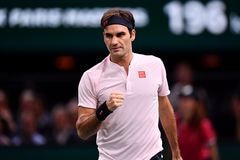 Denis Shapovalov withdraws from Next Gen Finals due to exhaustion
October 31, 2018 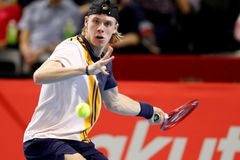 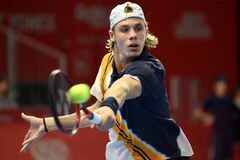