Sabres captain Jack Eichel deflected the credit, saying this was hardly his best game despite sealing Buffalo’s 3-2 overtime victory over the Oilers by scoring on a penalty shot Thursday night.

Edmonton captain Connor McDavid, on the other hand, was hardly in a talkative mood following an outcome in which he was one of two Oilers beaten by Eichel on the play leading to the decisive goal.

The two players forever linked after being selected first (McDavid) and second (Eichel) in the 2015 draft were once again centre stage in their ninth NHL meeting.

“By no means is it me beating him,” Eichel said, of splitting McDavid and defenceman Oscar Klefbom at the Oilers blue line, before being hooked by Klefbom on his way to the net. “I wasn’t very good tonight. I don’t know if you noticed. But our team played a great game.”

McDavid simply shrugged during a brief appearance in the Oilers’ locker room.

“I don’t know. He’s a good player. Makes a good play,” McDavid said. “I’m trying to defend it. Ref makes a call and that’s the way it goes.”

Eichel then secured the win 1:09 into overtime by breaking up the left side and sneaking a shot inside the far post behind Mike Smith. It was Eichel’s 26th goal of the season — two short of matching a career-best already — and seventh career overtime goal to break the franchise record he shared with Thomas Vanek and Derek Roy.

Sam Reinhart and Curtis Lazar also scored for Buffalo, which snapped a four-game skid and improved to 2-6-1 in its past nine.

Frustration set in with the Oilers, who came up short in a game Riley Sheahan and Ryan Nugent-Hopkins staked them to a 2-0 lead seven minutes in.

“Not too sure,” McDavid said of Edmonton’s collapse, which came two days after the Oilers nearly blew a 6-0 lead in a 7-5 win over the New York Rangers.

“It’s kind of the same story. We’ve got to find a way to defend a lead better,” he said. “It’s frustrating.”

Oilers coach Dave Tippett didn’t question the officials’ decision to issue Eichel a penalty shot, by saying Klefbom got in too tight on the Sabres’ captain.

Tippett was more unhappy with how Edmonton didn’t build on a fast start in which the Oilers were out-shooting the Sabres 9-1 before Lazar scored from the top of the crease 8:39 into the game.

“Decent start but our coverage in front of the net was not adequate tonight,” Tippett said. “The game just kind of went along and we didn’t grab it.”

Smith stopped 23 shots and dropped to 0-4-1 in his past seven appearances.

The Sabres bounced back from a 6-4 loss to Tampa Bay, in which Buffalo squandered a 4-1 lead.

The outcome, coupled with Buffalo’s slump, led to general manager Jason Botterill shaking up the lineup by completing two separate trades within 45 minutes of the puck drop.

First he relieved a logjam at the blue line and freed up salary-cap space by trading defenceman Marco Scandella to the Montreal Canadiens for a fourth-round draft pick. Botterill then sent the newly acquired selection to acquire veteran forward Michael Frolik from the Calgary Flames.

Botterill is counting on Frolik’s addition to improve Buffalo’s secondary scoring and its struggling special teams.

“We haven’t been very happy with the results at all,” Botterill said. “I would say since coming back from the break I think our team’s performed fairly well, but we haven’t gotten results. So, you’re always looking to try and find a fix.”

The only real setback for the Sabres was rookie forward Victor Oloffson limping off after helping set up Reinhart’s tying goal scored 3:53 into the third period. Oloffson, who began the day leading NHL rookies with 16 goals and 34 points, was alone and appeared to hit a rut in the ice behind the Oilers’ net.

Coach Ralph Krueger didn’t have an update on Oloffson status following the game.

Sabres placed LW Dalton Smith on waivers for demotion to the minors after he made his NHL debut on Tuesday. ... Oilers C Sam Gagner sat out for the fourth time in five games. ... Botterill said Frolik isn’t expected to join the team until this weekend due to visa-related paperwork that must be completed.

Neal, Nugent-Hopkins lead the way as Oilers hang on for 7-5 win over Rangers
Subscriber content
January 1, 2020 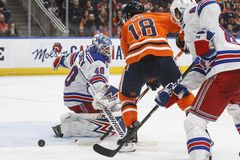