Two months later, the Italian rider left bitterness and his sprinting rivals in his wake to claim his first career stage win in the Tour de France after storming a bunch sprint on Tuesday with an impressive display of power and speed.

The 30-year-old track specialist, arguably the fastest man in the peloton this season, had left his home race empty-handed in May under controversial circumstances.

Viviani, who has now posted stage wins at all three Grand Tours, was stripped of a victory in Italy after the race jury ruled he had irregularly changed his line and blocked an opponent in the sprint.

There was no such hiccup on the finish line in the eastern city of Nancy, France, and Viviani was clearly the best.

The 2016 omnium Olympic champion was ideally set up by the Deceuninck-Quick Step lead-out train in the finale and made the most of the slight uphill finish to prevail. Viviani edged Alexander Kristoff and Caleb Ewan, claiming the fourth stage of the three-week race.

“It means a lot. Probably, I can’t believe it. It was a big goal of the year,” said Viviani, who dedicated his win to his fiancée and parents.

Team EF Education First rider Michael Woods of Ottawa was 64th in the stage, but moved up one spot to 10th over all. Hugo Houle of Sainte-Perpétue, Que., who rides for Astana, was 126th in Stage 4 and 84th over all.

The 213.5-kilometre flat route from Reims to Nancy did not pose any major difficulty and was a perfect opportunity for sprinters to get a stage win, a day after Viviani’s teammate Julian Alaphilippe seized the yellow jersey with a solo effort.

“My father and mother were on the finish line today, they were set to leave yesterday but finally decided to stay because the stage was for sprinters,” Viviani said.

Alaphilippe, the first Frenchman to wear yellow in five years, kept the overall lead, with no change at the top of the overall standings. Both men hugged warmly after their team produced a second straight stage win.

“I just need to thank the team, they were really unbelievable,” Viviani said.

The Italian speedster might soon be racing without his favourite teammates, however, amid reports he might join Cofidis next season as the French outfit seeks to replace its top sprinter.

Viviani said he has yet to make up his mind and that his Tour campaign will determine his future.

After Alaphilippe led the Deceuninck-Quick Step train to the front, Max Richeze and Michael Morkov set a very fast tempo to launch Viviani’s final acceleration. Kristoff opened up the sprint in the final stretch, but could not hold off Viviani on the left side of the road.

Alaphilippe was cheered throughout the stage. After several dozen fans greeted him at his team hotel in the morning, supporters lining streets across the small villages of eastern France wildly cheered him on, shouting “Loulou, Loulou!” – the Frenchman’s nickname.

Alaphilippe enjoyed a day free of pressure, well protected in the main pack by teammates, and then played a role in the final sprint to launch Viviani’s final effort.

Defending champion Geraint Thomas and other main contenders enjoyed a calm day, too, just making sure they rode at the front to avoid crashes or splits. Thomas and his Ineos teammate Egan Bernal remained seventh and sixth, respectively, in the overall standings.

“The team has been amazing. I haven’t had to do anything, just follow the wheels, and everyone has done their job perfectly. It’s been ideal,” Thomas said.

Under bright sunshine in Reims, three riders attacked from the off.

On long stretches of flat roads, Yoann Offredo, Frederik Backaert and Michael Schr built a lead that never exceeded 3 minutes 40 seconds as the peloton kept them on a leash before sprinters’ teams organized the pursuit and sped up the pace.

The trio was eventually caught with 17 km left, in the small Côte de Maron climb, leaving the spotlight on the fastest men of the peloton. 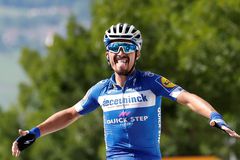 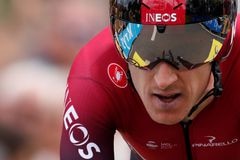