In order to run a sub-two-hour marathon, one must maintain a steady pace just over 21 kilometres an hour.

Most of us have been on a treadmill at some point. Six km/h is a nice, brisk walk. Anything more than eight km/h is jogging. Ten or so is running. Fifteen is running hard.

Twenty-one kilometres an hour is sprinting, close to the maximum speed of the average person in a short burst.

If you tried to run 21 km/h for two hours, nothing bad would happen to you. Because you couldn’t do it. More than 100 billion of us have lived and died in the time homo sapiens have walked the Earth, and we can say, at nearly a certainty, none of them have done it.

Until Eliud Kipchoge did it on Saturday.

There is a theory – the endurance-running hypothesis – which suggests human physiology developed as it did so we could run down our prey over long distances. Moreso than any other species, evolution designed humans to run. This is why someone who’s never attempted a half-marathon is able to do so without benefit of training (albeit, painfully).

While not all of us can box or play shortstop or swim, every able-bodied man and woman can run. And none of us has run better than Kipchoge.

As such, there is now good reason to think of the Kenyan distance runner as not just the greatest athlete alive, but perhaps the greatest in human history.

Kipchoge did not set a world record for the marathon (which he already holds) over the weekend. His quest to get under two hours required major tweaking, which would not be possible in a sanctioned race. As such, the result gets no official recognition.

The event was organized by a British chemical company rather than an athletic body. The course in Vienna was chosen for its optimal conditions.

Instead of the usual three pacesetters for a marathon, there were dozens. They dropped in and out of the race, forming a ‘V’ pattern around Kipchoge that protected him from headwinds. A car travelled just ahead of the pack, keeping them on schedule.

So none of this will go in the books. But Kipchoge’s time of 1 hour 59 minutes 40 seconds becomes to this century what 3 minutes 59.4 seconds (Roger Bannister’s time when he was the first man to run a mile in under four minutes) was to the last. It is an arbitrary mark that draws a tangible line across what human beings consider themselves capable of.

“Today we went to the moon and came back to Earth,” Kipchoge said afterward. And though that analogy has been used before after remarkable feats, this time it doesn’t feel like hyperbole.

At the first Olympic marathon, just one competitor finished in under three hours. By the late 1960s, they’d got down under 2:10. But there was a broad consensus in the running community that, while theoretically possible, sub-two hours was not a practical goal.

Then Kipchoge arrived. The age given on his passport is 34, but there are rumours he is a good bit older, perhaps as much as 40.

During the early part of his career, he ran middle distances. He was excellent at it, but not legendary. He won a gold in the 5,000 metres at the 2003 world championships and a bronze the next year at the Athens Olympics.

In 2013, he switched to the marathon. Since then, he has ruled over the discipline.

He’s lost only once – finishing second in his sophomore race behind a man who eclipsed the then-world record. In losing, Kipchoge posted a time that would have been the best only six years earlier.

From that point on, he was untouchable.

Despite the wealth he’s accrued through athletics, Kipchoge lives a life of unusual austerity in Kenya. He spends most of his time at a remote training camp, where everyone takes turns cooking and cleaning. He is said to have a gentle, thoughtful demeanour and is fond of aphorisms (“No man is limited”; “Don’t chase two rabbits at once”).

After a steady period of dominance, Kipchoge’s focus drifted from gold medals to the two-hour mark.

He first attempted to break through it in 2017, but flagged at the end. He came up 25 seconds short.

A team of scientists was drafted in to engineer Saturday’s second and, according to Kipchoge, final attempt. They sought to ensure every aspect of his race – shoes, weather, aerodynamics, mid-course diet, altitude – was perfect.

But Kipchoge still had to run it himself.

One of the things Kipchoge rued about his first try was that it was undertaken in near-total silence on a closed track. It was completely unlike a normal race. This time, he wanted an audience pushing him forward.

Thousands of Viennese and running aesthetes gathered on the route. Kipchoge ran the final stretch pointing to each section of the crowd like a politician greeting his supporters. Even at the end, his gait was so fluid it seemed as though he were being carried forward on a gale.

As he crossed the finish line, Kipchoge picked up speed and threw himself, rather than collapsed, into his supporters’ arms. After 42.195 kilometres, he looked ready to run another.

Now, very near the end of his career, Kipchoge becomes one of the most famous people alive. It’s likely that his marathon at next summer’s Tokyo Games will be his last. Afterward, he has said he would like to devote himself to good works.

Once he’d finished on Saturday, Kipchoge reached back to Bannister for a point of comparison.

“It has taken 65 years for a human being to make history in sport,” he said.

Three months after Bannister broke the four-minute mile in 1954, two people (including Bannister) did it in a single race. Many hundreds have done it since. So it is in the way of things that Kipchoge’s mark will not stand for long. He said so himself on Saturday.

That hardly matters. What the Kenyan has done is more important than a number. It is the thing that connects a few great athletes with visionary geniuses in other fields.

Eliud Kipchoge has redefined what is possible in the hope that, having seen that it can be done, others will follow. 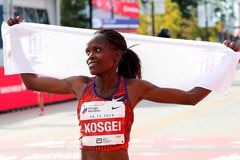 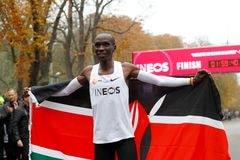