Johnny Carson once said that the least-used phrase on Earth is, “That’s the banjo player’s Porsche.”

England had got that far three times in previous World Cups. Each one was an abysmal failure. Each of them left scorch marks on the national memory.

Each of them also ruined the reputations of good players, who forever after had an asterisk appended to their professional achievements – “Yes, great player, but remember how he fluffed it against Germany/Argentina/Portugal.”

So in finally managing it on Tuesday, England not only advanced to the quarter-finals of this iteration of the world championship, but also put to rest the longest-running punch line in soccer.

That wretched baton gets passed to Colombia, and in particular onto the deeply unfortunate personage of Mateus Uribe.

Colombia had never taken part in a World Cup penalty shootout. With his team up 3-2, Uribe was the only man of 10 who missed the net, hitting a crossbar. It was the matter of an inch. Perhaps two. That miss tilted everything the other way.

The 27-year-old Uribe is not a player of much renown. His English-language Wikipedia entry is short, only a few sentences. Within minutes of England’s eventual 1-1 (4-3) win, someone had made an addition to it: “He is normally known for his cool-headed penalty taking on the world stage.”

When you consider that the last Colombian player who cost his country a game at the World Cup ended up murdered shortly thereafter, the gag loses a little of its zing.

Tuesday’s match was not a particularly memorable one – the chippiest affair yet at this tournament, full of whinging, diving. Players from either team spent so much time chasing the referee with their hands in the air they looked like a troupe at the Bolshoi.

England went up midway through. Colombia pulled it back right at the death. The extra-period was a half-hour of speed-walking to nowhere. Both teams feared losing it more than they wanted to win it.

England rode its luck, Uribe’s miss and a subsequent Jordan Pickford save to something that must feel like glory.

The result will be celebrated in England like a modern V-E Day. Not because the English won, but because they lifted a curse.

It will be rued in Colombia for a generation. Its best player, James Rodriguez, was injured and watched from the stands. The draw had opened up in front of the Colombians – get past Sweden and the winner of Russia/Croatia and they’d have been in the final. And then, who knows? It was the clearest path forward in decades, and not likely to be repeated.

What if Rodriguez had played? What if Colombia had won in the extra period? What if you could just go back and take those kicks again? Colombia is the home of magical realism and Colombians will never stop discussing those alternate realities in Bogota.

The misery for the losers here, and in every shootout, is that no professional soccer player misses a penalty in practice. If you have ever stood by at the end of a session, you’ll have seen the most leaden man on the roster bang them in with metronomic accuracy. Most pros could put it through a swinging tire.

But add in a few wrinkles – a crowd, the noise, a half-billion people watching, the World Cup on the line – and the surest foot goes wobbly. The worst part must be knowing that not only should you score, but that you must score.

Athletes usually have some face-saving wiggle room for failure – “I misread it” or “it got away from me a little” – but it doesn’t work with penalties in soccer.

Few will recall the open-net misses that preceded the final act. But no one forgets the guy who sliced it over the bar on a gimme at the end.

Roberto Baggio was the best player in the world until he missed like that in the 1994 World Cup final. Then he was a goat, forever.

“I still dream about it,” Baggio said, 20 years later. “Losing that way isn’t right, and neither is winning that way.”

Of all the reliably rewarding bar arguments in sport, this one is an original VW Beetle. It will run forever.

Baggio’s right. Losing on penalties isn’t fair. France’s Christian Karembeu once likened them to “loading a bullet into the chamber of a gun and asking everyone to pull the trigger.”

In other words, they cannot be won by a tremendous act of skill. They must, by definition, be lost by a single player’s mistake. The best-case scenario is that several takers screw up, and the blame gets spread around a bit.

The other options would be a period of extra time that does not end until a goal is scored or, if you are truly old school, ending in a draw and replaying the game.

That would be fairer, but it would also rob the World Cup and sport in general of its most dramatic scene.

There’s something about the dissonance between the game itself (where play never stops) and penalties (when the pauses stretch out forever) that is impossible to look away from.

If you are in a half-empty bar, it will fill during penalties at the World Cup. Offices come to a standstill. In the most soccer-mad parts of the world, the streets will empty.

People who do not care will drop everything so as not to miss a global moment. It’s one of the few times in life you can feel yourself truly connected to every other wired human (so, just about all of them) in the world. It’s a good bet they’re all watching.

There are plenty of winners and losers in life. Moon landings aside, we have very few of those moments. They are too precious to forego. Penalties aren’t a fair way to end it, but they are a great one.

Much of England would not have agreed with that idea yesterday. Today, they probably still don’t.

But now that they’re no longer the unlucky loser, they’ll be too busy trying to figure out if that means they’re on course to become the unlikely winner. 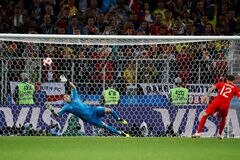 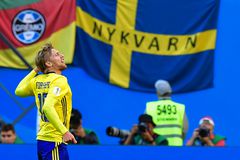 Sweet bedlam: Portrait of a Toronto soccer bar during the World Cup
July 3, 2018 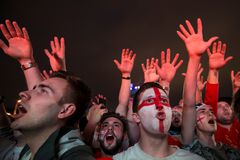