In an effort to penetrate beyond the sport’s traditional power bases, rugby took a risk in awarding the 2019 World Cup to Japan.

The country has a long history in the game which, unfortunately, hasn’t translated into being much good at it. Japan had won only one outing in its World Cup history.

The nadir was a 145-17 defeat to New Zealand at the 1995 tournament. The All Blacks didn’t bother putting out their best team. The encounter is still viewed like a game of Red Rover between the Chicago Bears and a Chicago boy-scout troop.

You can’t even call the final tally a “basketball” score. One-hundred-and-forty-five is a Yahtzee score.

The loss was so crushing to the Japanese rugby psyche that the sport dropped off the radar in that country for several years. The Japanese have required a quarter-century to build it back up. That sort of thing happens a lot to international rugby’s many also-rans after a World Cup.

Heading into this tournament, the fear was that matters might go wobbly for Japan again. Once the hosts go sideways at a major international, the occasion deflates.

The World Cup is a tune-up for Tokyo 2020 next summer, sort of the predrinks before everyone else shows up to the party. It was important that Japanese rugby not pop the balloon a year early.

On that basis, so far, so good.

Japan opened the tournament on Friday against Russia. It won 30-10 – a historically atypical result with a more typical scoreline. It doesn’t really matter what Japan does now. First impressions are lasting.

Now that at least one delightful underdog story has been recorded, we can get serious.

Owing to its physical rigours, the Rugby World Cup is awfully long – six weeks from start to finish. We’ll begin it in shirt sleeves and end it in parkas.

Who’s going to win? New Zealand will. New Zealand always wins. That’s the basic premise you should work from.

When you think about the national teams that define a sport – United States and basketball; Canada and hockey; Brazil and soccer – none come close to New Zealand and rugby.

It’s more than wins – and the All Blacks have won the past two World Cups. It’s myth building.

Somewhere between the haka and “sweeping the shed,” New Zealand’s national rugby roster began to define the archetype of team. In their monkish head-to-toe black uniforms, they even look the same. Different races, different sizes, but a profound uniformity nonetheless.

The team has its stars, but the players are interchangeable and produced predictably. New Zealand has its disappointments, but it doesn’t have down years. It purrs along at the greatest rate of average output in sports history.

It’s the sort of team admired by people who have never watched it play. You just know in your bones the New Zealanders deserve your respect.

On Saturday, they will play South Africa in their opening match. It is very possible this is a preview of the final.

Years ago, I thought it would be fun to watch a South Africa-New Zealand rugby match in a Johannesburg bar. We were already there for the soccer World Cup, so it seemed fitting to get the other half of the national sporting obsession. The game was played in Auckland.

The place we were told to go opened at dawn for the match after what must have been an eventful night. The floors were so covered in broken glass that the barman was sweeping it up with a shovel. The crowd looked as though they were all on work release. By the half, everyone was blind drunk. We tried to look small and Canadian.

New Zealand won by some stretch, but the mood in the room never darkened. There was no shame in losing to the best.

New Zealand has never lost a pool match at a World Cup. No team that’s lost its first game has ever won a World Cup. So there’s something at stake in Saturday’s game beside southern hemisphere bragging rights.

On the flip side of that, some observers have suggested that losing this game has an advantage, in that it puts the second-best team on an easier path through the knockout rounds.

It is curious this school of thought still gets any play. How often in your life have you thought, “Maybe by blowing this job interview, I will find myself in position to get a much better job.” And when did that work out for you? Elite athletes think about doing that sort of thing much less than the rest of us. They’re designed to try.

If you’re watching the big Kiwi-Springboks tilt, I salute your courage. It goes off at 5:45 a.m. ET. Much of this tournament will be played in the dead of night in North America.

By the time you read this in the newspaper, you’re going to have a good idea of where we’re at in this tournament, who’s the hare, who’s the hound and whether a great change is upon us.

Canada is in the same pool group as New Zealand and South Africa. Only two teams will advance from it.

So while every round-robin tournament features a Group of Death, this one has a Group of Certain Death. Canada is in Japan hoping to show well for itself rather than win anything.

This is the evergreen problem for Canadian rugby as well as every other second-tier national outfit in the world.

On the basis of pure athletics, you can get to a decent level of performance. You’re never going to have the grassroots organization of a country such as Wales or France, but you can find a few big, fast people and train them up to a respectable standard.

It’s the next level that’s hard. You need to start pulling the best competitors away from more popular sports. You need them to play professionally at the highest levels. And you need a bunch of them.

The only way to build that sort of team is to a) get very lucky or b) win things, even when you’re not supposed to. Success is inertial. The rich are always getting richer.

Rugby defies those sorts of Cinderella stories. All the power is concentrated at the top. Only four teams have ever won this thing. Only one of those – South Africa in the just-post-Apartheid 1995 World Cup – would be considered a truly unlikely champion. History won that tournament as much as talent.

More tellingly, just eight teams have made the World Cup semi-finals. This trophy is one passed around by England and a few of its former colonies. Canada isn’t one of them and probably never will be. It’s still fun to see them there.

This time around, there is a very slight sense of flux among the few aspirants to the throne. New Zealand hasn’t quite been up to a New Zealand-y level lately.

Ireland is the No. 1-ranked team in the world. It’s the first time Ireland has ever been best at anything that doesn’t involve storytelling or staying up later than everyone else. It is generally agreed the Irish can’t win which, if true, will allow the Irish to do the other thing they are world-beaters at – losing with a smile.

South Africa is the bookies’ second-favourite based on recent form. England looks solid. Australia doesn’t, but the Australians have a way of turning up when it matters. Wales is the contrarian’s pick. If you’re the type who always bets the longest shot on the board, Fiji might suit you.

But in the end, it’s probably New Zealand. The New Zealanders’ aura clears a path for them. Then you’re forced to stand there and watch them perform the haka. Then you’ve already lost.

I suppose the done thing is to say that it would be nice if this thing were actually up for grabs. That the sport needs to expand its base by sharing some of the spoils with the rest of the world.

But there is something comforting about a contest that heads toward a semi-predictable finish. It reminds us that being really good at something requires constant cultivation born of passion. That passion cannot be manufactured with money or infrastructure or by a bunch of guys with PhDs in sports performance. You can’t synthesize caring.

New Zealanders care more about rugby than any country on Earth cares about any pastime. That being the case, I’m happy to see them have it. 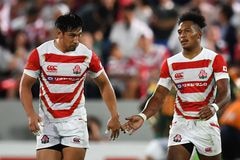 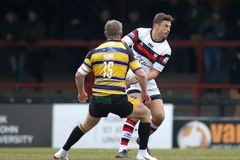