Now aged and decrepit, Brady has had another one of his comme ci comme ça seasons. The New England Patriots quarterback has only 12 wins. Only 4,000 yards passing. Only a 3-to-1 touchdown-to-interception ratio.

This is what happens when you are pretty provably the best to have played football. You’re constantly being held up against your perfect self and found wanting. At 42, Brady is not what he was at 30. He isn’t even what he was at 40. But he is still the most reliable winner in team sports. Now he has to prove it again.

Are you sick of Tom Brady? A lot of people seem to be. It isn’t his personality (he has none) nor his style of play (at his best, he makes football seem like a two-dimensional game of connect-the-dots). It’s his frustrating inability to be human. While all the rest of us are coming apart in mid-life like an airplane that’s lost a wing, he refuses to get any worse.

Brady’s longevity has become an affront to the natural order. He’s creating an expectation for the rest of us. And some people have grown tired of being shown up.

Having accepted that Brady is aging like a vampire, those people would like to see him move on. Brady can opt for free agency this spring, which would be a first in his impossibly long career. The Brady-Bill Belichick nexus would be broken and, presumably along with it, whatever magic it is that has frozen him in time.

All the talking heads are already cautiously mooting the moves he might make. To the Chargers, maybe? He is from California. Maybe he wants to die at home? Or the Broncos? It worked for Peyton Manning. Sort of.

Just about every NFL team is being pushed out there as an organization that wants or needs Brady.

All of this assumes the Patriots will lose in a wild-card game on Saturday to the Tennessee Titans.

Do you believe that’s going to happen? I don’t know you, but I know you don’t. You believe Brady’s Patriots can lose like you believe wind turbines and carbon taxes are going to solve all our problems. You would very much like to believe it, but you know in your bones it isn’t true.

There aren’t many articles of faith in sports fandom, but this has become one of them for the current generation – the Patriots don’t lose. Not in the first round of the playoffs. Not at home. And not when Brady is still ambulatory in the fourth quarter.

There’s something reassuring about this ludicrous run of quality. As long as Brady is at it, things remain the same. We don’t have to face whatever comes next. Not just in football, but in life.

The passing of an iconic player is a small death for the rest of us. Michael Jordan framed my youth. I was young when the Chicago Bulls star started and not young at all when he finished. All of us have that sort of player. Losing them isn’t about sports. Not exactly. It’s about ourselves. While we were watching, we were also getting old. As long as they remained on the field/court/ice, we could carry on pretending that hadn’t happened.

It’s possible no one will leave quite the same hole in this regard as Brady. He’s been the gold standard for two decades – a third longer than the distance between Muhammad Ali’s first and last world titles, a span that seemed to last forever.

As 21st-century athletes learn how to hold time in abeyance, this feeling intensifies. A kid who discovered tennis player Roger Federer in his mid-teens is now in his mid-30s. That’s the difference between the person you might be and the person you became.

Legendary athletes no longer feel like regular occurrences. They seem to come in one-man or one-woman waves. Once they’re gone, you haven’t the time or energy to replace them. That’s for the next generation to manage.

This has to end some time and Brady is getting close. His team has been rebuilt underneath him several times. This year’s version is the weakest in a while.

Brady aside, the 2019-20 Patriots are the generic brand of NFL products. They get everything you need done done, but you’ve never heard of most of them.

Brady put up respectable personal statistics despite the fact that his No. 2 receiver is a second-string tailback. Some decent offences are patchwork. Brady’s is just one guy furiously knitting for 60 minutes.

Nonetheless, the Patriots aren’t going to lose Saturday because Brady won’t let them. His aura alone is enough to discombobulate most NFL opponents. In the playoffs, the shine coming off him is magnified. He still wins games during the warmups. He wins because everyone on the field believes he will.

This spell won’t travel. Brady is never leaving the Patriots because his coach, Belichick, who is 67 years old, understands that his own legacy depends on an uninterrupted run with the player who defines his career.

Too many greats have made this mistake – accruing an immense amount of glory, then frittering away a bunch of it chasing one last title under the flag of a foreign power. You just have to picture Joe Montana in a Kansas City Chiefs uniform and how wrong that looked. What was the point of it? There was none.

Brady and Belichick are conjoined at this point. Team owner Robert Kraft is linked in there somewhere. A ship this redoubtable deserves to go down with all its captains still on board.

But that’s still a ways off. For now, the Patriots remain Super Bowl favourites until Brady decides he no longer wants them to be. There’s something comforting in that, especially for those who grew up with him.

Whenever it does end, the people looking to rush Brady into retirement or irrelevance will probably be the ones who miss him most.

The NFL has wrapped itself in Stars and Stripes
Subscriber content
January 3, 2020 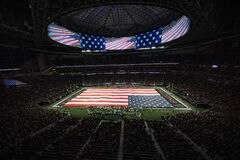 Opinion
NFL officiating won’t get any better when playoffs begin this weekend – because it can’t
January 2, 2020 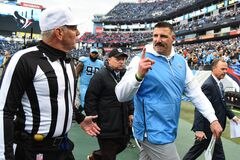 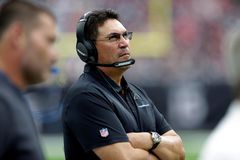