Roy Halladay, who prided himself on finishing what he started, was elected into U.S. National Baseball Hall of Fame on Tuesday night in his first year of eligibility.

The former Blue Jays stoic starter will officially be enshrined into Cooperstown in July. It is anticipated he will become just the second Toronto player in franchise history, along with second baseman Roberto Alomar, to enter the Hall wearing a Blue Jays cap.

He will join three other players who were also elected to the Hall on Tuesday in a vote by members of the Baseball Writers’ Association of America, including dominant New York Yankees closer Mariano Rivera who became the first entrant to ever be voted in unanimously.

Rivera, the game’s all-time saves leader with 652, was named on all 425 ballots cast. Fellow pitcher Mike Mussina and designated hitter-third baseman Edgar Martinez are also in the 2019 Hall of Fame class.

To gain election, a player must be named on 75 per cent of ballots cast and they remain eligible for 10 years.

“Of the countless players that have worn the Blue Jays uniform, few have done so with the determination and elegance of Roy Halladay,” Mark Shapiro, president and chief executive officer of the Blue Jays, said in a news release. “Today is a bittersweet day for our community and organization, as we remember a beloved pitcher, teammate, and family man, but we can take comfort in the boundless impact Roy had on Canadian fans nationwide and the game of baseball.”

Halladay, a native of Colorado, died in a flying accident in 2017 when he was 40.

“Doc was one of the greatest baseball competitors I have ever seen,” said Pat Hentgen, a former Blue Jays pitcher who now works for the organization as a special assistant. “His work ethic, mental toughness, professionalism and consistency on the mound were unmatched.

“Every fifth day that he pitched, he held an intense focus on one goal: to give his team the best possible chance of winning. Any player who had the honour of sharing a clubhouse with Doc will agree that they are better having known him.”

Halladay spent 12 of his 16 Major League Baseball seasons with the Blue Jays, where he will be recalled as one of the greatest pitchers in franchise history and of his era. He concluded his career with the Philadelphia Phillies.

Halladay finished with a 203-105 career mark with a 3.38 earned run average, not to mention 67 complete games. Sixty-one of those complete games occurred between 2003 and 2011, with his closest rival being CC Sabathia with 31.

He pitched more than 2,000 innings for a mostly losing team and won the Cy Young Award as the top pitcher in the American League in 2003. He won it again in 2010 with the National League’s Phillies, where he concluded his baseball career after the 2013 season.

Halladay’s Hall of Fame ticket was solidified on Oct. 6, 2010, when he threw the second postseason no-hitter in the history of the sport – in his first playoff appearance no less – when he led the Phillies to a 4-0 win over the Cincinnati Reds.

Larry Walker, a native of Maple Ridge, B.C., and in his ninth year on the ballot, finished with 54.6 per cent of the vote (232), a big increase from the 34.1 per cent mark the right fielder garnered a year ago. He will have one last chance at making the Hall next year.

Opinion
Roy Halladay was true-Blue, regardless of his jersey
January 21, 2019 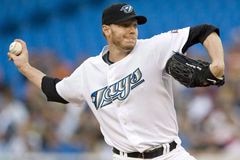 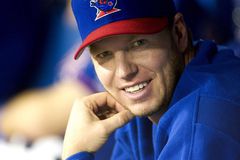