Boris Becker gained fame on the tennis court for his booming serve, six Grand Slam titles and stunning victory at Wimbledon at the tender age of 17. But off the court, Becker has been far less adept at managing his money and he’s now locked in a legal battle with creditors who are owed more than $80-million.

Becker’s financial woes stem from a series of bad investments and a history of poor judgment that has left him buried in debt and facing the humiliation of watching bankruptcy trustees sell off some of his prized trophies from Wimbledon, the U.S. Open and the Davis Cup.

The German tennis great now lives in London and he was pushed into bankruptcy last year by a High Court judge who chastised him for having “his head in the sand” when it came to paying bills. Since then, more creditors have surfaced, including Becker’s former business adviser, Hans-Dieter Cleven, who is owed €36-million ($55-million). In total, Becker’s liabilities stand at around £50-million ($87.5-million), while his assets amount to less than £500,000, according to court filings. That’s a stunning financial fall for someone believed to have pocketed around £100-million from his 15-year playing career.

Becker hasn’t been taking this lightly. He’s pushed back at the creditor claims and last week he took the bizarre step of invoking diplomatic immunity to try and stop the bankruptcy proceedings. Becker told the court that the Central African Republic, one of the poorest countries on Earth, had named him an attaché at the European Union for sport, culture and humanitarian affairs. According to Becker, the post shields him from all lawsuits unless the CAR consents.

In a statement, he said the bankruptcy process had “inflicted a whole heap of damage on me.”

“I have now asserted diplomatic immunity as I am in fact bound to do so, in order to bring this farce to an end, so that I can start to rebuild my life,” he added. “Once this gravy train for the suits has been stopped in its tracks, my lawyers will turn to the question of compensation. I will be coming after the people who forced this process through to hold them publicly accountable for their actions.”

His new-found ambassadorship hasn’t impressed the court-appointed bankruptcy trustees who’ve been trying to find, and sell, Becker’s assets to raise money for creditors. They said Becker has frustrated the bankruptcy process by withholding information about his holdings.

“Despite allowing Mr. Becker a number of opportunities to co-operate satisfactorily and provide information to the trustees, during the course of our appointment, he has failed to do this,” said Mark Ford, one of the trustees. “We welcome Mr. Becker’s appointment to promote sport in the Central African Republic. However, we believe that it has no material impact on Mr Becker’s bankruptcy.”

The trustees have already started unloading some of Becker’s cherished mementoes. Last week they put 81 items up for sale on an online auction site run by Wyles Hardy & Co. The items included miniature trophies Becker received after each of his three Wimbledon victories, as well as the tray he won for finishing runner-up in 1995.

Also for sale are Becker’s medals for making the semifinal at Wimbledon in 1993 and 1994; and replica trophies he received for winning the U.S. Open in 1989 and the Davis Cup in 1988.

Bidders can also buy a selection of Becker’s watches, including a “Top Gun Wrist Watch”; or bid on T-shirts, socks, a tennis racquet and even a pair of shoes he wore while winning the Australian Open in 1996. The auction is open until June 28 and some of the trophies have generated bids in excess of £10,000.

Becker’s financial problems go beyond the bankruptcy. In May, he split with his second wife, Dutch model Lilly Kerssenberg, setting up another hefty divorce tab. The couple had been married for nine years and they have an 8-year old son named Amadeus. Becker’s first marriage to Barbara Feltus ended in 2001 after he had a fling in a broom closet at a London restaurant with waitress Angela Ermakova while Feltus was in the hospital about to give birth. Feltus got £10-million in the subsequent divorce as well as the couple’s condo in Miami and custody of their two children. Becker also had to pay Ermakova around £3-million in child support.

His business interests, too, appear to be souring. German media have reported that Becker has not fared well from several Nigerian oil ventures, and a building project he backed in Dubai collapsed a few years ago. His sports website venture also failed, along with an organic food business. And he’s been hampered by a conviction for tax evasion in Germany in 2002 which dried up several business opportunities. That case led to a suspended jail sentence, a £315,000 fine and a bill for €3-million in back taxes and interest.

Then there’s his 62-acre mansion in Spain which he’s largely abandoned and had to remortgage twice to pay bills. The villa has been on the market for years and last month it was taken over by a group of squatters called the “Intergalactic Auxiliary and Rescue Command.”

Becker still has enough cachet from tennis career to generate some work. He’s a regular commentator on the BBC during Wimbledon and he’s a pitchman for PokerStars.com, a Slovenian mobile phone company and a tennis academy in China. He also spent three years as Novak Djokovic’s coach and the Serbian won six Grand Slams under the German’s tutelage. And despite all the legal tangles over debt, Becker has rejected suggestion he’s in dire straits. “It’s crazy to think I’m broke,” he told a Swiss newspaper last fall. “I have enough national and international deals to earn an income that will allow me to pay my staff on time and carry on my life as normal.” 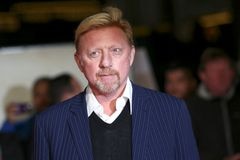