Lewis Hamilton comfortably won the French Grand Prix from pole position on Sunday to clinch a sixth victory this season and extend his championship lead over Mercedes teammate Valtteri Bottas to 36 points.

Hamilton is having a run of success as he chases a sixth Formula One world title. This was his fourth consecutive win and 79th overall — only 12 behind F1 record-holder Michael Schumacher’s tally of 91.

Bottas, who made a poor start from second on the grid, finished in second place. He was a massive 18 seconds behind Hamilton, who on Saturday took a record-extending 86th pole .

“I got into my rhythm and after that it was quite comfortable,” Hamilton said.

The bad news for Hamilton’s fading challengers is that he feels he’s just warming up.

“The car’s improving the more I get into the season,” he said.

“I gave it everything. Toward the end I was catching Valtteri. He was struggling a bit,” Leclerc said after his third career podium. “I saw an opportunity but unfortunately there weren’t enough laps left.”

It was a consistent race weekend from the 21-year-old Leclerc, who was third in all three practice runs and qualifying.

By the end, Bottas was relieved Leclerc ran out of time.

“It became a bit close with Charles,” the Finnish driver said. “Closer than we wanted.”

Red Bull’s Max Verstappen placed fourth ahead of Ferrari’s Sebastian Vettel, who took a point for the fastest lap in what was otherwise another disappointing performance from the four-time world champion.

Vettel, who started seventh after a poor qualifying stint, has not won for 16 races dating back to the Belgian GP last August.

When Hamilton won here at the same stage last year, he regained the championship lead from Vettel.

Now he leads third-placed Vettel by 76 points — 187 to 111 — in what looks like becoming yet another disappointing season from the German driver, who lost the last two titles to Hamilton due to mistakes under pressure despite leading both of those campaigns.

But aside from the heat, there was little for Hamilton to sweat about in what turned into one of the easiest wins of his career.

The British driver made a clean start, but he was not pressured by Bottas despite a long run into the first turn.

Bottas came in for his first tire change on Lap 23 of 53 and Hamilton changed his tires on the next lap. His lead was such that even after he came out of the pits he was still ahead of Vettel, who had yet to pit.

French driver Romain Grosjean’s poor form continued, and he retired on Lap 44. He has scored only two points so far and is fighting to keep his seat at Haas for next year.

He, like Vettel, will need to improve at the Austrian GP next weekend.

Mercedes has won all eight so far — the other two going to Bottas — while Ferrari has not won since former driver Kimi Raikkonen’s success at the United States GP last October. There are 21 races in the season.

Ferrari has not won the drivers’ title since Raikkonen in 2007 and clinched the last of its constructors’ titles in 2008.

The team brought some upgrades to the car for this race, which Ferrari was hopeful about, yet ultimately they didn’t make any difference.

“The biggest aim was to close the gap as much as possible and we failed,” Vettel said. “We have to understand why some of the bits we brought didn’t work. Hopefully we can try again, and the track layout in Austria next week will go our way.” 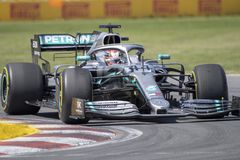 Lewis Hamilton wins Monaco Grand Prix in the spirit of Lauda
May 26, 2019 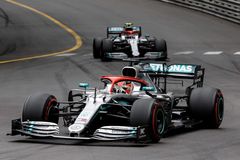 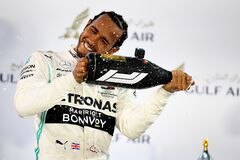