Before Bianca Andreescu was born, her mother, Maria, was employed at a bank in her native Romania. It was the early 1990s and, while she was busy working all day, she spent her nights with stacks of books – reading, studying and learning English, in mental preparation for a journey she had not yet taken.

“She was telling me for a few years that she wanted to go work in Canada," Maria’s mother, Ana, told a Romanian newspaper earlier this year. Recalling how the study light poured out all night from under a locked door, she said it spoke to how her daughter had droves of determination.

Nineteen-year-old Bianca beat Serena Williams in straight sets this Saturday to win the U.S. Open, becoming the first Canadian to win a Grand Slam singles title. Friends and family say her success stems from her hard-working parents, Maria and Nicu, who were were among an influx of immigrant professionals who took a chance to come to Canada from a country caught in post-Communist collapse.

Bianca Andreescu followed plan all the way to the top

Whether it was Maria’s hard-working intensity or Mr. Andreescu’s calm, calculating demeanour, ambition has always driven the Andreescu family. While Bianca was born in Canada, she was raised partly in Romania where she discovered her love for tennis, before returning to Canada to pursue the sport more seriously.

Her parents made the initial move to Canada in the mid-1990s, settling down in Mississauga and later Vaughan, Ont.

Maria has spent the past 10 years as chief compliance officer at a Toronto-area financial company, after getting a master’s degree in finance from the University of Craiova in Romania.

“I give a lot of credit to her mom," says Aref Jallali, a Toronto-area tennis instructor. "She guided her [Bianca] through the mental part.”

Having coached Bianca as she turned into a teenager, Mr. Jallali says she has a champion’s unique mental fortitude – and also a rare ability to envision success before she achieves it.

For example, he remembers a time when Bianca Andreescu wrote a positive message on her hand – “I won” – as she progressed deeper into her first major global tournament. The power of that positive thinking ended up paying off as she ended up winning Les Petit As, an elite French contest for players 12-14.

Mr. Andreescu got a mechanical engineering degree in Romania and has worked as a tooling engineer at a Toronto-area automotive company since 1996, according to his LinkedIn profile.

"[He] is very calm,” Yves Boulais, the director of the Ontario Racquet Club, said in an interview.

Because his own 19-year-old daughter played with with Ms. Andreescu growing up, Mr. Boulais got to know Mr. Andreescu. Today, he credits the father’s mental mindset for helping his daughter learn how to pick apart opponents – and get through stressful situations. “He’s really down to earth – not too excited,” Mr. Boulais says.

Ms. Andreescu’s Romanian grandparents are credited for helping raise her. Flipping through photo albums, three of these grandparents spoke at length to a local newspaper, Eveniment Valcean, in a 30-minute video posted to YouTube earlier this year.

When the Andreescu parents left Romania around 1995, “all they had was one bag and a frying pan. That’s all they could take with them,” said Grigore Andreescu, Bianca’s 81-year-old paternal grandfather.

Wearing a fedora and speaking in front of an Orthodox calendar, he credited Ms. Andreescu with sending him the expensive $1,000 hearing aides he now wears.

After her mother started a business in Romania, the family moved back for several years as Bianca started elementary school. But the business was short-lived and the family returned to Canada close to a decade ago. It was around that time that Bianca began to take her tennis more seriously.

“The thing that makes her unique is her determination,” said Mr. Jallali, her former coach. And, he added, “she is fearless.” 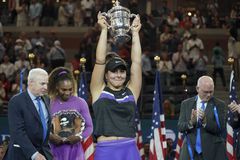 How Tennis Canada nurtured Andreescu all the way to the top
September 9, 2019 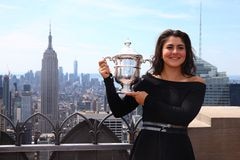 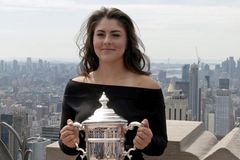