Coronavirus information
The Zero Canada Project provides resources to help you make the most of staying home.
Visit the hub
LAS VEGAS
The Associated Press
Published May 31, 2020 Updated May 31, 2020
Comments
Please log in to listen to this story. Also available in French and Mandarin. Log In Create Free Account

Brazilian heavyweight Augusto Sakai employed some unpunished gamesmanship to eke out a split-decision victory over Bulgaria’s Blagoy Ivanov in the penultimate bout of the UFC’s first show in its hometown since the coronavirus pandemic began.

The event was held without fans at the UFC Apex, a small gym with broadcast facilities on the promotion’s corporate campus. The UFC used minimal personnel to stage the fight, and the promotion said everyone involved was subject to strict health and safety protocols.

The 33-year-old Burns (19-3) dominated on his feet and on the ground, finishing his first main-event bout with likely the biggest win of his career and his sixth consecutive victory since July 2018, including four straight since moving back up to welterweight.

From a first-round knock-down to a strong finish, the Florida-based Brazilian soundly defeated one of the most accomplished welterweights in UFC history and made his case for a shot at champion Kamaru Usman, who happens to be his training partner.

“I trained so hard for this fight, and I knew I could do it,” said Burns, who entered the bout ranked sixth in the crowded 170-pound division. “I was calling these guys out for a reason. I’m coming to stay. That was a former champion right there. You saw a dominant performance against a former champion. I’m ready. I feel so good right now.”

“I love the champ, my training partner,” Burns said. “But come on, give me a shot. A lot of respect, a lot of love for you, but I think I’m next. … If they want to make a fight in July, come on. I don’t have a scratch.”

Burns came out with furious energy against Woodley, dropping the ex-champ in the opening seconds and gaining full mount. A gaping cut opened in Woodley’s left eyebrow in the opening minutes, and Burns again overcame Woodley’s famously strong takedown defence to drop Woodley again in the second round.

Woodley (19-5-1) hadn’t fought since losing his title in a one-sided thrashing from Usman in March 2019. Woodley had reigned atop the division for nearly three years, and the 38-year-old University of Missouri graduate said he dealt with depression while debating whether to stay in MMA or to pursue a music career.

Burns’ victory capped an entertaining show at the Apex, where the octagon is only 25 feet in diameter, compared to 30 feet in most competitive cages. The compact dimensions typically lead to more aggressive fighting, and this card featured six finishes in its 11 bouts.

Burns was fighting in a fan-free arena for the second time in 2 1/2 months. He stopped veteran Demian Maia in Brasilia on March 14 in the UFC’s final show before it halted competition.

After an eight-week break, the UFC returned to competition earlier this month with three shows over eight days in Jacksonville, Florida. With ambitions to hold near-weekly cards throughout the summer as part of its expansive broadcast deal with ESPN, the promotion relocated its operations to its own facilities after the Nevada Athletic Commission agreed three days ago to allow the return of combat sports.

Although this card was fairly light on star power, the promotion will stage UFC 250 next Saturday night from the same gym. Two-division champion Amanda Nunes’ featherweight title defence against Canada’s Felicia Spencer headlines the pay-per-view card.

UFC President Dana White continues to promise additional shows this summer from the so-called “Fight Island,” an undisclosed private isle where the promotion intends to host bouts between fighters who can’t enter the U.S. due to health restrictions.

Sakai escaped punishment from referee Jason Herzog in the third round when he blatantly grabbed the chain-link wall of the cage while attempting to avoid a takedown attempt by Ivanov.

Grabbing the cage is illegal and punishable by a point deduction, but Herzog merely warned Sakai verbally. The decision was met with audible disbelief by Daniel Cormier, the former UFC heavyweight champion working in the quiet arena as a colour commentator.

Strawweight contender Mackenzie Dern opened the main card by finishing Hannah Cifers with a knee bar that was the first leg-lock submission victory by a woman in UFC history. Dern (8-1) earned her first win since giving birth to her daughter last year. 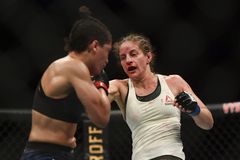 UFC 249 ushers in fan-free, mask-filled era of sports
May 10, 2020
Report an error
Due to technical reasons, we have temporarily removed commenting from our articles. We hope to have this fixed soon. Thank you for your patience. If you are looking to give feedback on our new site, please send it along to feedback@globeandmail.com. If you want to write a letter to the editor, please forward to letters@globeandmail.com.
Comments