In moving on Thursday to free owners of the OHL from treating their employees as such under law, Ontario Premier Doug Ford’s government congratulated itself on “protecting the long-term sustainability of local junior teams.”

The government’s news release on the matter referred to its support of “the People Protecting Amateur Hockey,” which would be a pretty good name for a secessionist group of Saskatchewan freedom fighters.

The upshot here is that Ontario Hockey League players are excluded from the Employment Standards Act. They exist legally under the slippery formulation of “student athletics.”

Despite performing in front of paying crowds, the OHL’s largely teenage workforce receives no wages. The players get small stipends based on seniority, are fed and watered by locals and enjoy a minor celebrity in whatever town they’ve ended up in.

The OHL generates tens of millions in revenue, yet the stars of the show only get one rung up Maslow’s hierarchy of needs. In circus terms, these kids aren’t the acrobats. They’re the elephants.

Keeping them penned up is great news for all of us. In future, the province’s other corporations might look forward to all the long-term sustainability that will be protected when they no longer have to pay their workers as well.

Your long-term sustainability might take a hit in the short term, but eventually you will find yourself enjoying the new company compound in Flint or Sarnia, the cozy company barracks and the fact that you can set your own hours, so long as they amount to 12 a day.

You can go home to visit family during the holidays. They’ll be glad to hear about all the sustainability you’re protecting.

But before we head down that road, the guys in the Tory war room will have to come up with something catchier than “indentured servitude,” a socially acceptable form of which Ford has just endorsed.

Teenagers who agree to this bargain have their eyes on a bigger prize – the NHL, or pro hockey somewhere in the world.

Nobody likes a whiner and nobody on Earth likes a whiner less than the people who run NHL teams. That understanding underlies all the tough talk about lawsuits, unions and workers’ rights.

If the players and their families are being taken advantage of, they are enthusiastically complicit in the swindle. Hope is a powerful incentive. The less likely the hope, the more alluring it seems.

Probably not, but it’s okay for you to think that.

The owners of OHL teams may be grifting the help, but, like jumping into a game of three-card monte outside a bus station, the help only has itself to blame if it turns out badly.

This financial ecosystem has its own logic. Outsiders and their opinions, no matter how well intentioned, are held in general contempt by both sides.

We’ve done it that way for a long time and though it may not be ideal, I’m not prepared to say it’s wrong.

But once the government – any government – wedges itself into a team sweater and assumes the role of Protector of the Grand Tradition, we’ve got a problem.

Ford did the very thing on Thursday evening, dropping the ceremonial puck at a Peterborough Petes game.

The crowd’s reaction to the premier was mixed – a few boos and a few cheers. Mostly, the people on hand did not seem terribly interested. They just wanted the game to start.

Regardless of which way you lean, I suspect we all have an aversion to the “Human Who Participates in Sports” cosplay that so enamours politicians.

I do not care that Justin Trudeau enjoys running (Parenthetically, have you ever met a jogger who did not feel compelled to let you know within the first five minutes of meeting them that they jog? Does such a person – the silent runner – exist? And, if so, would he/she please run for prime minister?).

I did not care that Stephen Harper had some deep thoughts about hockey and its role in Canadian identity.

I would have preferred that they both use their public running/NHL viewing time to balance the budget and avert wars, which is what they claimed to enjoy doing when they were on the stump.

Likewise, I do not care that Doug Ford likes amateur hockey. I care even less that he wants to protect it.

Hockey’s fine. It doesn’t need protecting. The moment it does is the moment we have to start letting go of it.

Sports remains monolithic for the same reason the OHL gets away with not paying its players – it exists in the realm of fantasy.

Though the rule is being tested of late, that fantasy is welcoming of every sort of person. It’s not just non-partisan (aside from wishing ill on the visiting team), but anti-partisan.

It’s why so many people who don’t care that much about the results still like to think of themselves as fans. It makes them part of something big, cohesive and permanent that has no barriers of access.

That open-doors policy is the real community good we’re speaking about here. Once politicians get involved and begin picking sides, we’ve set down the path to closing those doors.

By all means, mayors ought continue placing goofy bets with other mayors about the outcomes of games (within reason and only during the championship phase of a competition). Political hopefuls are welcome to show up at games (in street clothes). It is right and good that anyone in public life have a favourite team and enjoy talking about it (when asked). But for the love of God, they must avoid legislating our games in any way, shape or form. Stop trying to make things that are already good better (i.e. worse).

Meddling with our pastimes doesn’t make politicians look connected, or active, or just like the rest of us. Rather, it makes them look like they can’t figure out anything useful to do. 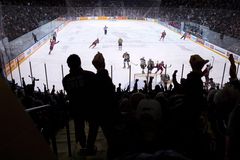