A few days ago, there was a brawl at a kids’ hockey game in Simcoe, Ont. The initial report had the suggestive vagueness of a battlefield dispatch – multiple combatants, as many as 30, embroiled in a “physical confrontation.”

This sounded quite reasonable to most ears. People are, after all, bonkers. And it is hockey, which quickens the blood of all Canadians, right up to the point where otherwise average taxpayers are running out to their Volvos to fetch a tire iron. Of course, as it turned out, none of this had happened.

“I have seen worse at a work site or a schoolyard,” one of the team’s parent reps later told The Globe and Mail’s Marty Klinkenberg.

Read More: The brawl that never was: How an argument among parents at a hockey game went viral.

A few sharps words had been exchanged, but no blows traded. Someone phoned 911 and in that broken telephone way, a foolish argument became Pickett’s Charge. The cops showed up in force and who can blame them? These were hockey people.

There isn’t much fighting in NHL hockey any more. Most people agree that’s a good thing, in public at least.

I will admit to a wistfulness for fighting and know many people who feel the same way. When they come clean on that, they do so in a lowered tone – “You know what? [check over both shoulders] I sort of miss fighting” – like they’ve just admitted to cheating at something.

Then again, we’re not the ones getting punched in the head. So maybe we don’t get a say.

But it seems that as the most obvious instance of violence is removed from the game, the low-grade moral panic around hockey continues to simmer. We worry constantly that hockey is “out of control” or that the mere playing of it encourages dark thoughts and actions.

If someone were to tell you that a fight broke out at a swim meet, you’d think, “Did someone release a nerve toxin?” But when you hear the same story involving hockey, you assume the worst. We all just did.

Out East, they’ve roiled for days after a line brawl at a university game. In the 1970s, this sort of thing happened daily in hockey. And we’re not just talking about the NHL.

Were people just more savage back then? Yes. Even as kids, we were beating the tar out of each other at every opportunity and being congratulated for our enthusiasm. We used to fight at baseball.

The on-ice riot between the Acadia University and St. Francis Xavier University men’s teams prompted a lot of pearl clutching. Fighting? Isn’t that over?

(One Maritimer of my acquaintance sighed, “Tell them to spend a night out in Yarmouth watching a Junior A game. They’ll see some fights.”)

Next came the public autopsy.

As is so often the case, a spiteful word causes more injury than a blow. One of the players had been taunting another. The taunted player believed he was being targeted because he knows a sexual-assault survivor. The taunter said he believed he was just throwing out a generalized insult – “You look like a rapist.” The result was a big fight.

It all ended in official handwringing, scripted apologies and multiple suspensions. The coaches got it the worse, which is the way this should work. If you’re being paid to be in charge, you take the blame. It was a proper shemozzle.

Perhaps we can all agree on a few things.

That when young people get together they usually share one trait – a heedlessness that will occasionally veer into epic acts of stupidity. That things will be said on the ice/field that would never be said in the real world. Though they oughtn’t, they are. That if someone said that to you, you might punch them, too. And that the fault here does not lie with hockey, but with the casual cruelty that competition, taken too far, can encourage.

You are more likely to dam an ocean that rid sports of any of the above. No amount of penalty minutes or postfacto sanctions will work the trick.

People will be idiots. Fights will result. In some instances, fisticuffs are an emotional purgative. While that shouldn’t be encouraged – and especially not at the amateur level – it also doesn’t mean the End of Days is upon us.

And to complete this Rule of Threes, the NHL suffered this week through another of its bouts of philosophy. You know what the Department of Player Safety needs? It isn’t more former pros going through tape frame by frame. It’s an epistemologist: ‘Why is this thus, and what is the reason for this thusness?’

This one involved Pittsburgh star Evgeni Malkin attempting to axe-handle an opponent. Back in the day, Malkin was a little bit of a fighter, just like everybody else.

A couple of weeks ago, he ‘fought’ Steven Stamkos. It looked like two guys simultaneously giving each other the Heimlich manoeuvre. As fighting has gone out of fashion, Malkin has forgotten how to do it.

In the older, more barbarous NHL, Malkin might have fought Raffl. Or someone else might have later on his behalf. In the new, civilized NHL, Malkin instead attempted to separate Raffl’s skull from his spinal column with his stick blade.

After a great deal of discussion and pondering, Malkin was suspended for one game and Raffl got off. Why? Who knows. None of this makes much sense any more.

Would the presence and acceptance of fight culture have made that particular situation any better? Maybe. You could argue that it reduces stick work, and keeps the Raffls of the world from punching too many head-backs. But also maybe not. As noted above, people are bonkers.

Eliminating fighting in hockey is not synonymous with eliminating violence. Until they get rid of all padding, start kicking the puck down the ice and have everyone play within earshot of their mothers, people will attempt to hurt each other. Use of fists is a single aspect of that. Eliminate one weapon and another will take its place.

This is the one thing hockey has to distinguish itself from the world’s other popular team sports. Almost all of them involve putting an object in a goal of some sort. But none do it with quite so much animus as hockey.

Though I may miss it sometimes, getting rid of fighting is an aggregate good. It had spiralled away from something spontaneous to a circus act. It had become bear-baiting and was diminishing everyone involved.

But no tweaking of our social mores or the NHL rules can alter hockey’s essential character, which is roughness. Sometimes, that roughness will tip over into brutality. 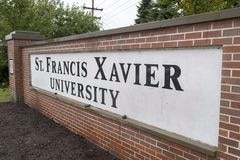 The brawl that never was: How an argument among parents at an Ontario hockey game went viral
February 8, 2019
Follow us on Twitter @globe_sports Opens in a new window
Report an error Editorial code of conduct
Due to technical reasons, we have temporarily removed commenting from our articles. We hope to have this fixed soon. Thank you for your patience. If you are looking to give feedback on our new site, please send it along to feedback@globeandmail.com. If you want to write a letter to the editor, please forward to letters@globeandmail.com.
Comments